It is hard to believe that the last time I wandered the streets of Prague was 13 years ago, but time has a way of getting away from us. That was why I was so happy that it was the final stop on a fun Viking River Cruise starting in Paris and ending in the Czech Republic. With a couple of nights at a hotel in town, it also gave me an opportunity to get to know one of the best cities in the world all over again. My time was brief though and I knew that in order to make the most of my time there I’d have to be focused and organized. In the process of exploring though I reacquainted myself with all the famous sights for which Prague is so very well known, as well as remembering the special not so famous moments that make this such an incredible city to visit. 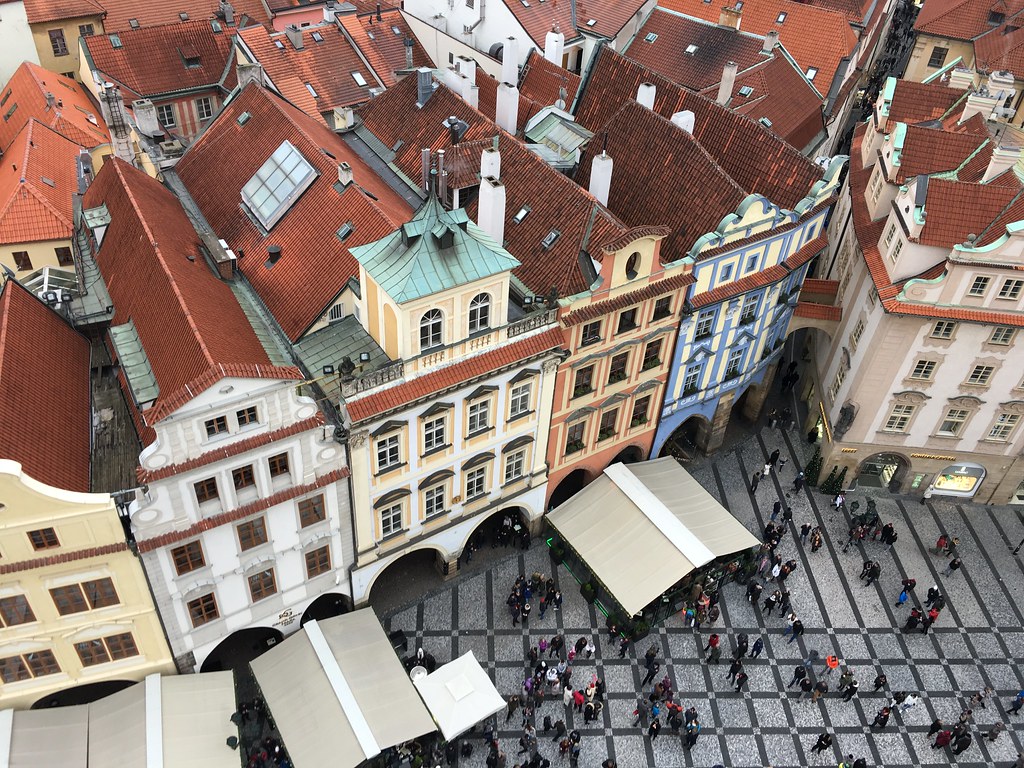 Climbing the Top of the Old Town Hall

The center of the tourist experience in Prague is without a doubt the Old Town Square. Not only is the square full of gorgeous architectural marvels, but it’s also home to the medieval relics that attract visitors from around the world. The Jan Hus statue, the Gothic church and of course the famous Astronomical Clock installed in the Old Town Hall. While the clock is nice, it was the town hall that really interested me and I knew that the views from the top were something I just had to see. The line to ascend to the top was long, but luckily my Viking tour guide gave me what was the best tip of the day. In the tourist office next door there’s a back entrance to the ticket office and the tower itself, one where there was no line and which I breezed through en route to the top of the tower. From that lofty position the old city of Prague sprawled out in every direction, a colorful collection of buildings and a maze of streets that is truly unlike any other city in the world. 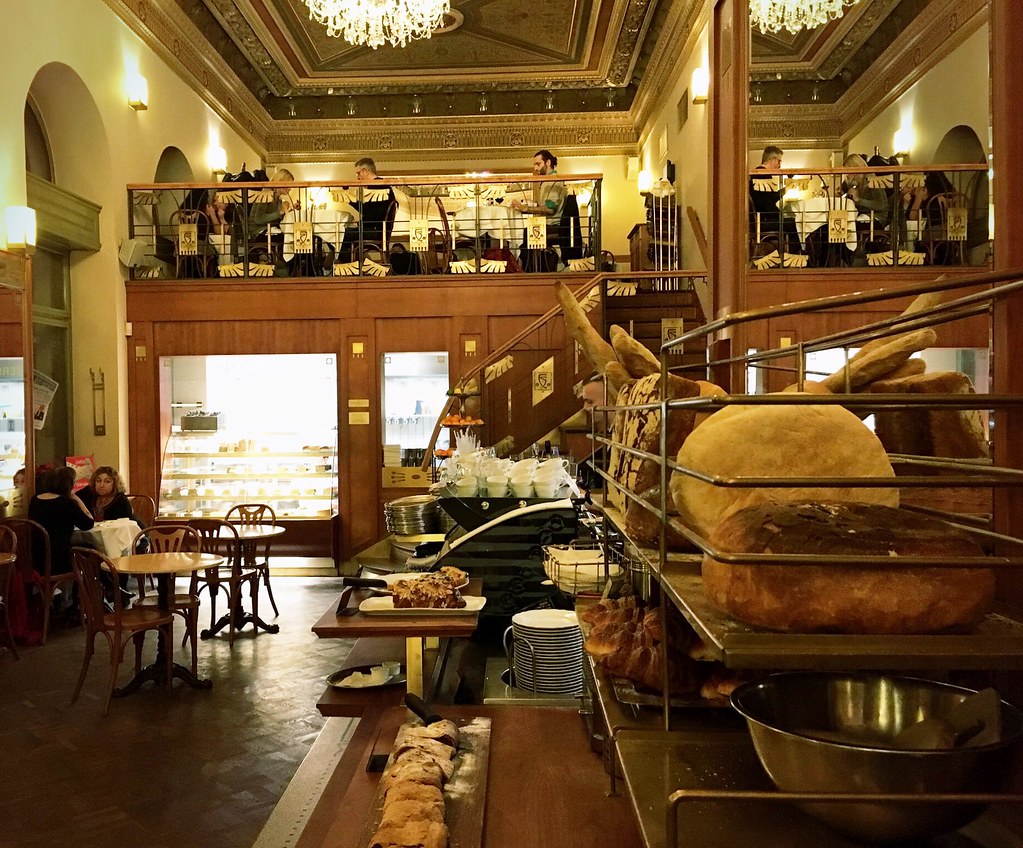 I’m a huge fan of food tours and knowing that I’d have a couple of days in Prague I searched for one that would fit my schedule. Sadly none of them did, but one company – Taste of Prague – did provide me with their PDF food guide to Prague, which is how I discovered the iconic Café Savoy. Lovingly restored to its former glory, the Cafe Savoy is a beautiful 19th century establishment in the best of art nouveau traditions. It’s a monument to what life was like in this great intellectual capital, a history that reflects Prague as a whole. The ceiling is what captured my attention right away, dating back to 1893 and sparkling with chandeliers, it creates the perfect mood for what is truly excellent food. I opted for schnitzel and some other traditional bites, the ideal first dinner in a city that can at times excel in elegant moments.

It’s arguably the most touristy experience in Prague, but the Charles Bridge is popular for a reason. Construction of this massive stone bridge started in the 13th century and ended in the 15th, creating one of the most remarkable civil engineering projects in the world. Decorated with more than 30 statues, it’s also one of the most beautiful bridges in the world. More than good looks, when it was built it was an important trade link internationally as well as within Prague itself. Even today this is the preferred way for tourists to get from one side of the city of the other, from the Castle to the medieval center of town. With thousands of people on it simultaneously, it may not have been a quiet moment but it was fun and the views of the city are worth the trek alone.

Spending Time in the Christmas Markets

I was on the Viking River Cruise because of the Christmas Markets and the ones in Prague were amongst the best I’ve ever enjoyed. The focal point of Christmas festivities in Prague is at the Old Town Square, where most of the most popular sites in the city are found. The massive market takes place every year in front of the massive church Our Lady before Týn and Old Town Hall. It’s large, it gets busy but it’s also a lot of fun. Having spent (and enjoyed) a week beforehand touring Germany, it was nice to see some different foods and drinks offered, along with entertainment and gifts. It reminded me of why I love visiting a variety of European countries around Christmas and the overall effect was nothing short of transformative. A highlight though was the food, especially the traditional dessert Trdelník. Made from sweet yeast dough, the cake starts off as a strip that is spun and then wrapped around a cone–shaped baking spit and rolled in granulated sugar. It is baked on a charcoal grill while doused with melted butter, until its surface becomes golden-brown. During the baking process the sugar caramelizes and forms a shiny, crispy crust on the cake. Made to order, the cakes are served up hot and the steam rising up looks just like a chimney, hence it’s nickname the chimney cake. In Prague they are served plain or with any number of add-ons, the best of which is Nutella. This was probably my favorite dessert of the trip, which is saying something. While popular during Christmas, they’re a year-round treat that are always easy to find.

I am exceptionally good at getting horribly lost, a skill I’ve practiced all over the world. Even in the age of Google Maps and a variety of apps all designed to keep me on track, I still get lost and I’m actually thankful for it. Getting lost in new cities gives me the chance to see and experience things I never even knew existed, and that was certainly true in Prague. Getting lost in Prague led me to rediscovering the massive Wenceslas Square, an important center of life in the city. Walking along the long streets that run parallel to it, I enjoyed the festive mood of the season as well as stumbled on newer aspects of the city’s history. I also got lost getting to and from my hotel just about every day, discovering new neighborhoods and sights along the way. If any city begs to be discovered by accident it’s Prague, and getting lost there was one of the best directionally challenged experiences I’ve ever enjoyed.

Prague is a special place, a fact I was reminded of almost immediately upon my return. While it took my 13 years to revisit this beautiful city, I’m certain it won’t be another 13 years before my next visit.