Located in the southeastern part of the province near the American border, the Eastern Townships have had a long history of welcoming immigrants not only from their neighbors to the south, but around the world and the Manoir certainly echoes these traditions. Before, during and after the Revolutionary War, many who were still loyal to the British Crown decided to flee the colonies, the Eastern Townships one of the more popular choices.

Although the Manoir is named after one of these settlers, it wasn’t until the Gilded Age when the region surrounding what is today North Hatley began to explode in popularity. The wealthy elite from the American South decided they no longer wanted to spend long, luxurious summer holidays in New England and instead traveled further north, beginning a yearly tradition in the Eastern Townships that is still largely observed even today. The Manoir was the summer home for one such wealthy captain of industry, which explains the broad pillars and verandahs that still are hallmarks of the property today. Even though the home became an Inn in the 1950s, walking around I could feel the echoes of the property’s gilded past, but one that has been reshaped for the 21st century. 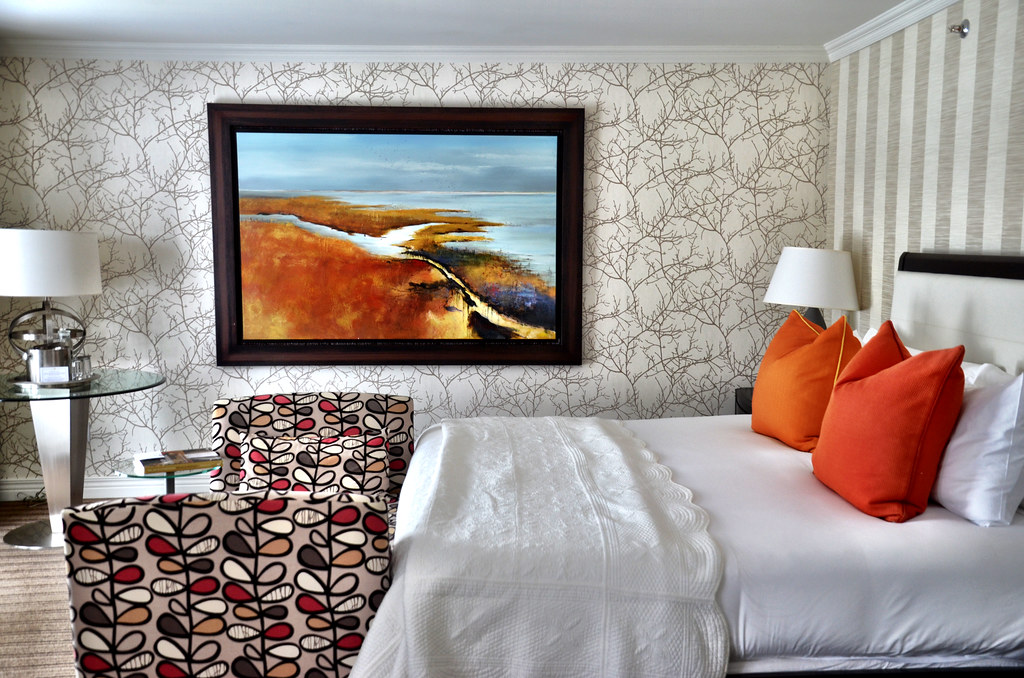 When I first drove up to the Manoir Hovey, it felt exactly like visiting a wealthy person’s lavish country estate, and I loved that. I loved that it felt more like a homecoming than arriving at a homogeneous resort, which is yet another reason to enjoy staying at smaller hotels. With just 37 rooms, it’s an intimate luxury experience and one I couldn’t wait to jump into. One reason why I personally always look for Relais & Chateaux properties when I travel is that I know I am guaranteed certain assurances, one of which is that the hotels are modern and luxurious. A big reason why I don’t like B&Bs is because they almost always feel like I’m staying at Grandma’s house and while I do enjoy rural luxury homes, I want to enjoy them with modern and well-conceived design and aesthetics. Luckily, the Manoir Hovey accomplishes all of this with ease. 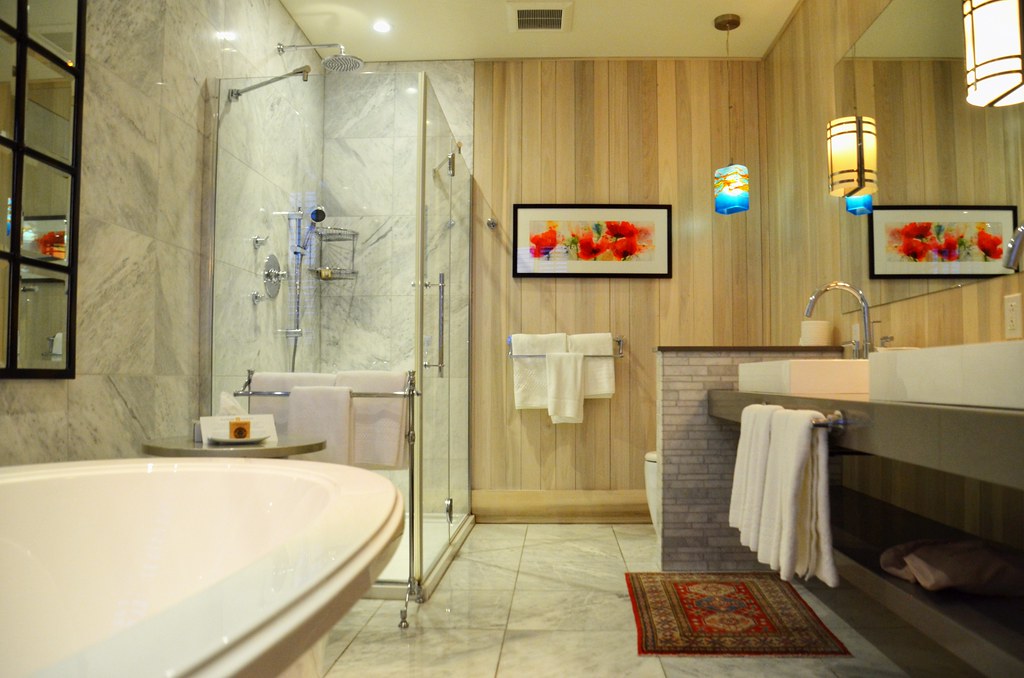 The fin de siècle architecture and natural grace of the home itself has been thoughtfully preserved, creating that feeling of a country escape I so wanted. But the rooms and other public areas have been updated to reflect the needs and wants of the modern traveler. Walking into my own room, I couldn’t help but start beaming broadly. Since there are only 37 rooms and suites, no two are exactly the same and the design is unique to that room. Working with a former Hollywood set-designer, the accommodations are modern with clean lines but aren’t too cold or sterile. They maintain that ambiance of staying at a friend’s house, but an extremely wealthy friend’s house. Bathrooms feature floor to ceiling marble and the easy to use thermostat/fireplace in the room created a rustic flair that I loved. It’s a home, so the size, shape and layout of every room is different from one another, but one thing that the Manoir has been able to manage exceedingly well is the extremely high quality of each one. In addition to the exceedingly comfortable rooms, guests also enjoy other luxurious touches from fast and free WiFi to my favorite L’Occitane bathroom amenities.

Relais & Chateau properties are also well known for their culinary programs, an area where the Manoir Hovey frankly excels. 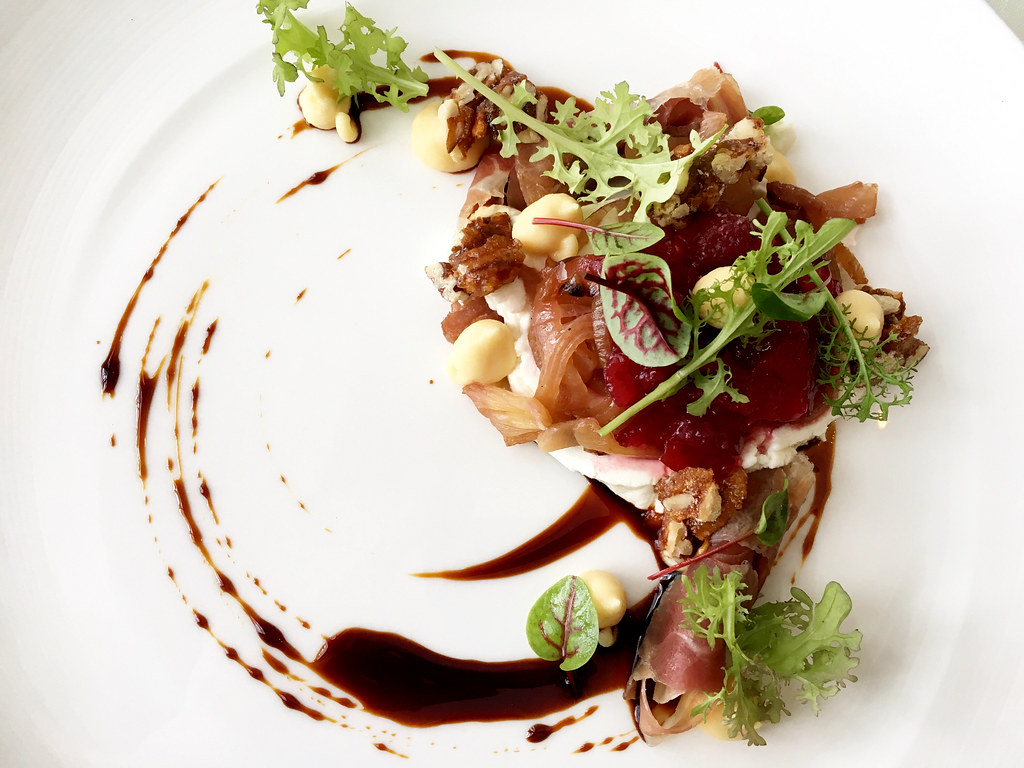 I normally don’t call myself a fine-dining kind of guy, but I almost always love the experiences I enjoy and that was certainly the case at Manoir Hovey. The main restaurant, Le Hatley, is masterfully led by longtime chef Francis Wolf. Working with chefs like Ducasse, Boulud and Palmer before arriving at the Manoir, his cuisine is very much influenced by the rivers and seasons of the Townships. The menu changes many times throughout the year, reflecting what the chef can source locally and which demonstrate the bounty of the region.

For dinner, guests can enjoy a la carte or a chef’s menu and since I ate there twice, I decided to try both. What was most notable to me throughout all of my meals though was the finesse with which Chef Wolf presents the dishes. Modern plating featuring delicious food was the hallmark of the culinary experience for me, an unexpected highlight of my visit to be honest. Dishes like rustic potatoes and truffle, foie gras with pears, venison loin and more all came together to create flavor profiles I know I’ll never forget. 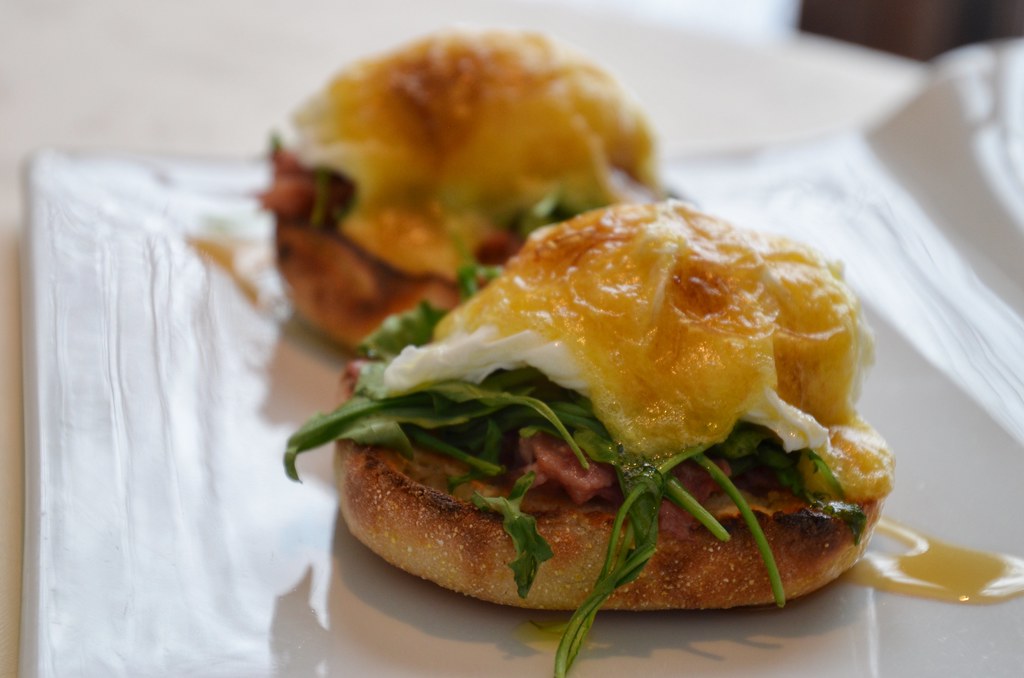 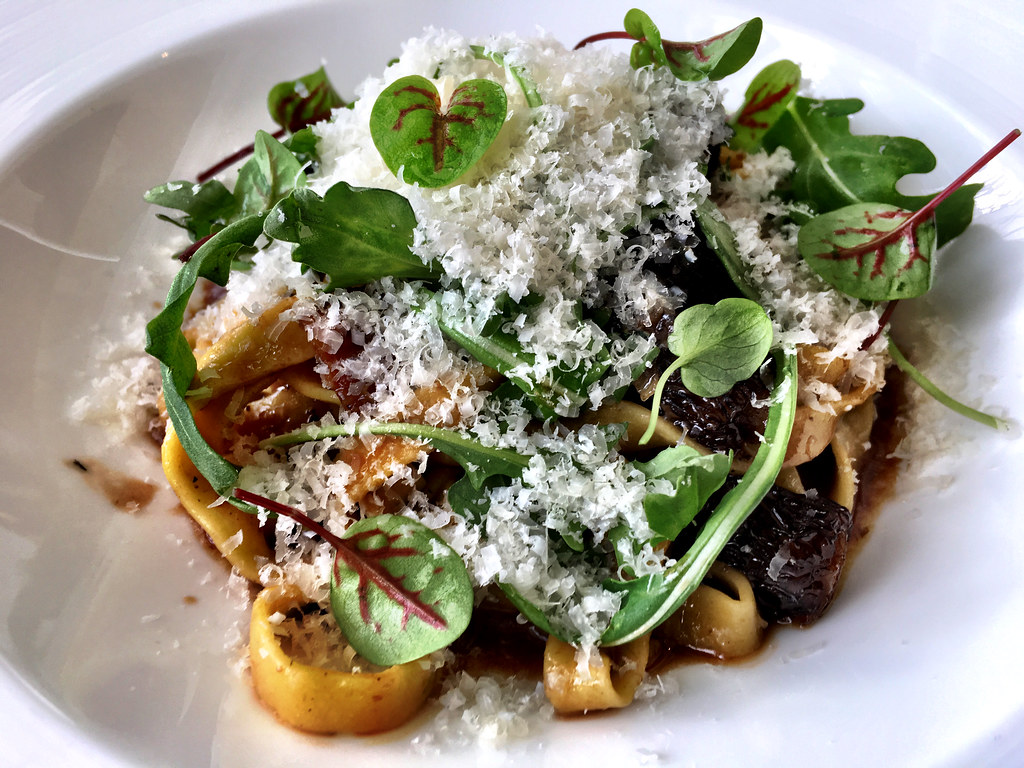 That level of care and attention to detail carries through to all meals, the breakfasts are beautifully prepared and the perfect start to the day and even lunch at Le Hatley is an affair to remember. The finesse with which my dinners were prepared was also on display at lunchtime, whether with the shockingly beautiful plating of the warm goat cheese or the rich and comforting homemade Tagliatelles, it all just worked and made me instantly vow to return to enjoy the other dishes I didn’t have time to try. 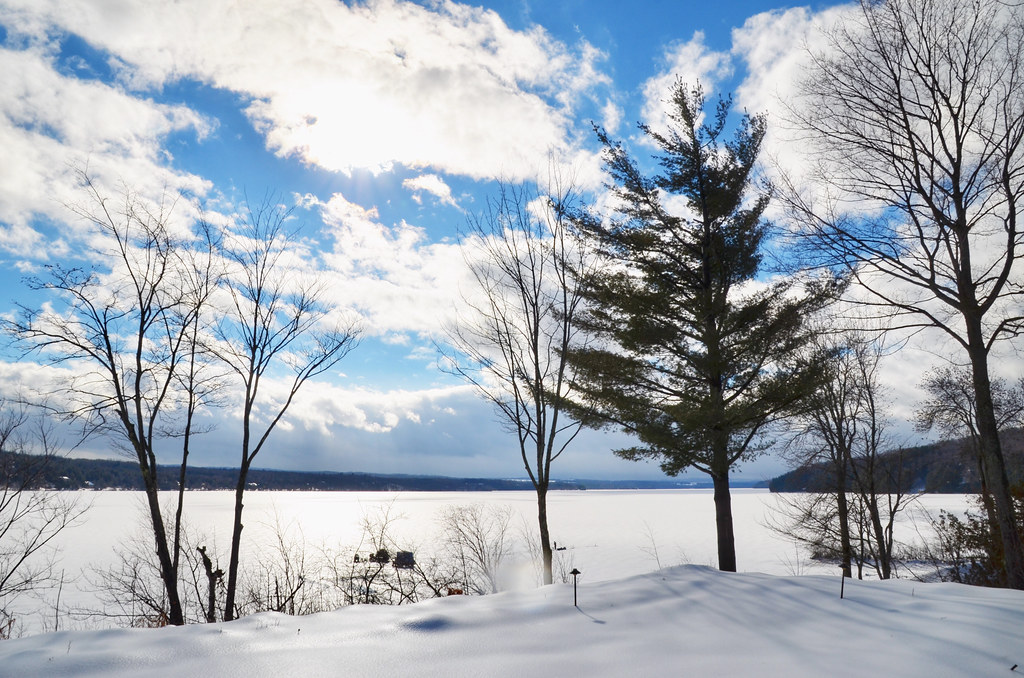 Quebec’s Eastern Townships are a popular tourist destination year-round for a variety of reasons. In the summer months, the lakes and rivers are the perfect spots to relax, go boating or try some fishing. Even in the winter though, as during my visit, there’s plenty to see and do. Skiing has been popular here for years, and many guests at the Manoir spend most of their days shushing down the slopes. It’s not all action packed adventure though, the Townships themselves are a beautiful destination in their own right. Driving around, even in the snow, I couldn’t help but be taken by the rolling farms and Green Mountains of Vermont further in the distance. It’s a rural place, but it’s what I needed. I needed a place where I could slow down and relax, and for me the Eastern Townships fit the bill. 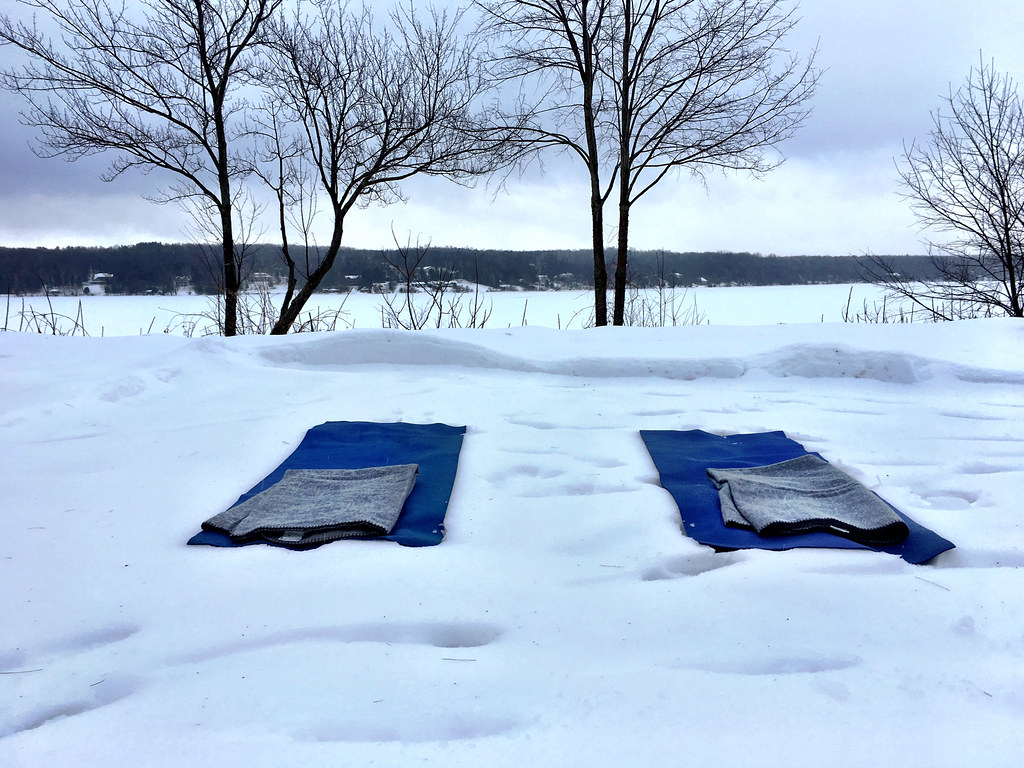 At the Manoir Hovey itself there are also fun experiences to enjoy, including two personal favorites, snow yoga and ice fishing. Snowga is something new at the Manoir, building on the popularity of the exercise during the summer months they’ve decided to offer a winter version. It’s a little strange at first bundling up for a yoga lesson, but I quickly found myself at ease on my mat under expert tutelage on the hard packed snow in front of the hotel. While at first a little chilly, I soon warmed up and the hour or so improving my breathing techniques and trying to bend in ways I don’t normally bend was one of the most relaxing hours I spent at the Manoir. For something very unique though, there’s nothing more fun than an ice fishing adventure on the lake. 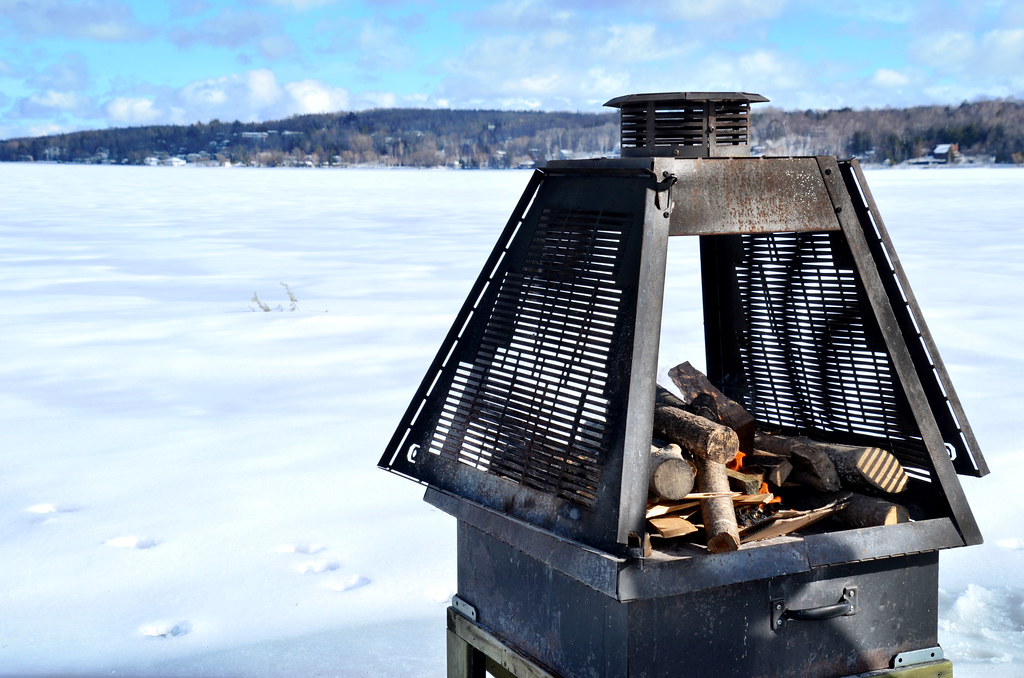 Local expert Florent Hébert offers guests at the Manoir Hovey the opportunity to join him on the ice of Lake Massawippi in front of the property for an afternoon they won’t soon forget. A local character, his stories, wit and wisdom I think are the stars of the experience, but being out on the lake is fun too. Showing even horrible novices like myself the ins and outs of ice fishing is surprisingly fun and if you’re from a more southerly part of the world, like I am, it’s not an activity you’ve probably ever done before. Florent is also a trained chef and brings with him homemade pizza he bakes in a small oven on the ice along with beverages and a lot of cheer. It’s a fun afternoon of community and bonding and I quickly understood why it’s one of the most popular wintertime activities at the Manoir.

Sometimes we just need to get away from things, to disconnect a little from the day to day and seek solace in a more rural setting. The Manoir Hovey is the perfect place to enjoy the rustic beauty of Quebec, without sacrificing any conveniences. Service, rooms and food are all amongst the best I’ve experienced and it’s also easy to reach, a quick drive from Montreal, Vermont, Boston or even New York. It’s a lot more accessible than I had realized, which means I hope to return soon and continue my own personal education in what it means to enjoy a Gilded Age getaway in the 21st century.