For the last five years, I’ve traveled to Europe a week or two before Christmas in order to visit new places, but also to experience Christmas markets during this special time of year. I love visiting Europe in December because, while the weather can be iffy, it’s when there aren’t as many tourists and instead one finds local residents out and about enjoying the festivities. I feel like a certain tourist veneer is removed and I’m let into a different, a more special version of these always remarkable destinations. I once again made that journey this year, joining Viking River Cruises for a Christmas market itinerary starting in Paris and ending in Prague. Along the way though were a bevy of German Christmas markets following the Rhine, Moselle and Main Rivers. This post is NOT meant to catalog all German Christmas markets; that would be several hundred pages long, nor is it even a list of my favorite German Christmas markets. Instead, I wanted to share the ones I explored this year, many for the first time, and what makes them so much fun to visit. 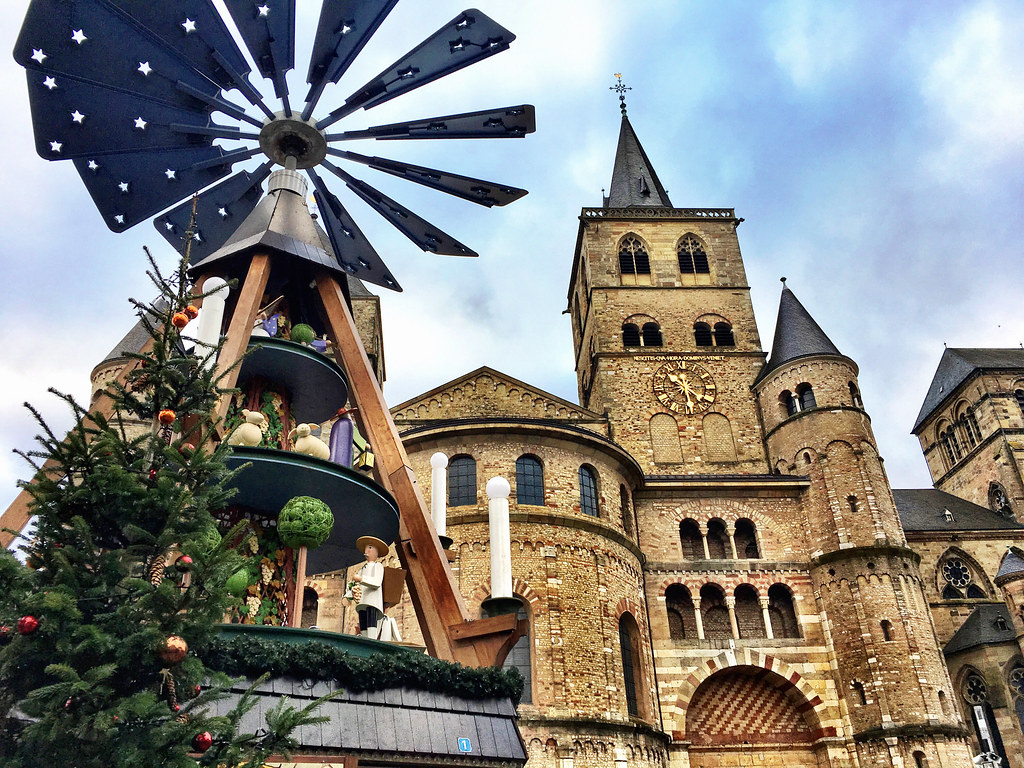 Germany’s oldest city, Trier has been settled since Roman times. That, along with many other reasons make this a fun place to visit any time of year but Trier takes Christmas seriously. The main market is located in the middle of Trier’s medieval center, a colorful square that I imagine must be beautiful year-round, but at Christmas it makes for the perfect festival backdrop. Spilling over into the square near the cathedral, the colorful market features a large Christmas Pyramid, dozens of food and drink stalls and naturally plenty of potential-gifts for purchase. One drink in particular is famous in Trier, a sour apple cider that when warmed is the perfect antidote to a chilly December’s afternoon. Trier is also where I discovered flammkuchen, which is common throughout Germany but which actually started along the Moselle River near Trier. The two together aren’t just delicious, but a nice way to get to know the city a little better.

When sailing a Viking River Cruise itinerary, it’s common to visit smaller towns in the afternoons or evenings, which is exactly when the Viking ship Odin docked in this small but unforgettable town. Luck was with me that night, because I inadvertently found myself in front of the town’s star Christmas attraction, an advent calendar the size of a building. Advent calendars started in Germany and it’s still where they’re done best, but in Bernkastel the entire facade of the historic Apotheke is an illuminated calendar that has its own set of traditions. Every night at 5:30, the center window opens and a Christmas story, song or poem is recited to the crowd below before that day’s window is then opened. It’s a fun, intensely local tradition and I was thankful to be a part of the crowd that evening. 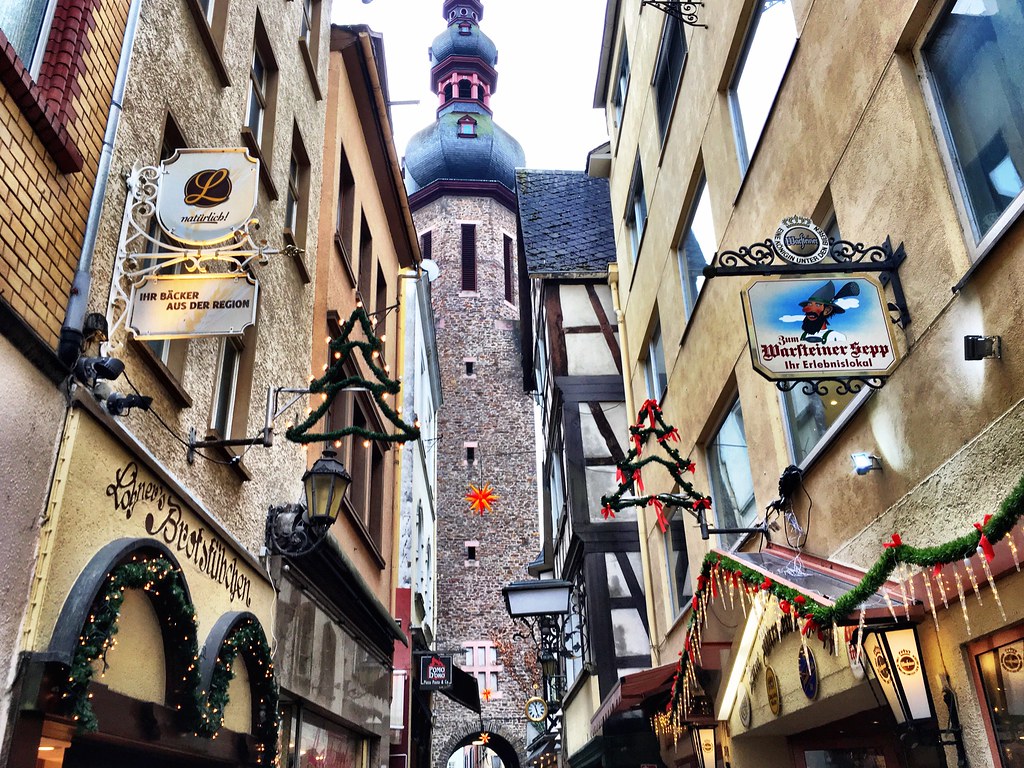 Christmas markets come in all shapes and sizes, but almost always reflect their communities better than any other annual event. Cochem is a great example of this, a tiny town famous for its white wines, the market was the smallest I’d visited in Germany, but it was still fun. Just a few stalls comprise the entirety of the market near the river, but the pastries and snacks are Cochem classics and the warm regional wines are the perfect accompaniment. While the market may not be the most impressive, the entire downtown is cheerfully decorated from the main fountain to the shops and restaurants that line the small pedestrian streets. I loved roaming around town and even though it’s not a large town, it’s one that begs to be visited and enjoyed.

An important aspect of my Viking River Cruise this year was that it included a few cities I had already visited. I liked that because it gave me the opportunity to get to know them a little better, to go beyond the primary tourist sites and instead delve deeper into the local community. Of course in December that also means experiencing their Christmas markets, and in Heidelberg there are plenty of options. It’s hard to say where the main market is, instead there are several all located along the country’s longest pedestrian-only road, the Hauptstrasse. In these markets you’ll find almost any kind of classic German holiday dish, drink and craft. They’re busy, they’re fun and they’re festive and when you add in the incredible backdrop of churches, shops and ancient squares that only Heidelberg can provide, then you have something truly special.

Although I’d visited two years ago, it was in the spring and I was excited to revisit this medieval town in what must be its best season, Christmas. Known as the best-preserved medieval town in Germany, the half-timbered buildings and the small, centuries old streets in Rothenberg seem perfectly made for the holiday season. After just a few minutes I knew that my hunch was right, and Rothenburg was one of my favorite stops on the Viking River cruise. There are several, small markets around town, with the main market held in the center square immediately in front of city hall. Even though it was freezing outside, I climbed to the top of town hall tower for what I already knew were incredible views. It was amazing to see how different the city looks in spring versus winter, no less beautiful, just different. Rothenburg is also home to one of the largest, and most famous, Christmas stores in Germany, so if shopping is your thing then you’re in luck. For my money though, spending some time walking around, eating at a few of the stalls and stopping to people watch is the best way to visit this always gorgeous town. 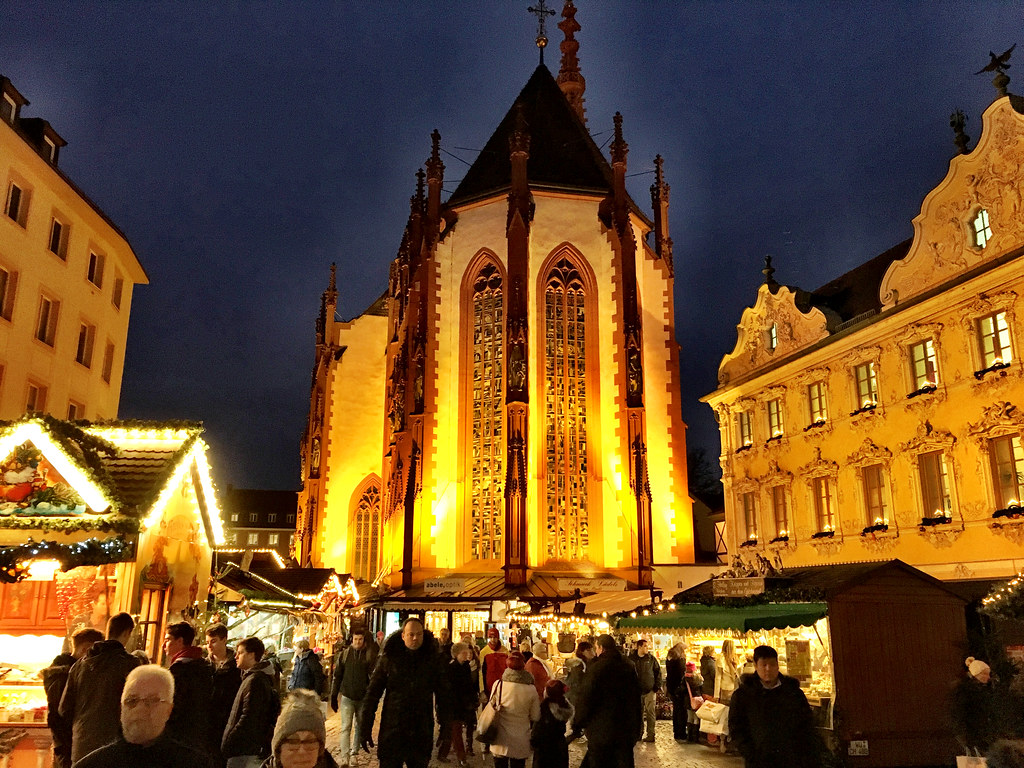 Immediately I knew that another visit to Wurzburg would be necessary, but that didn’t mean I failed to make the most of my nighttime visit. A large city of more than 125,000 people, there’s a lot to love about Wurzburg, from the UNESCO recognized palace to the beautiful churches and vibrant student culture. In December though it’s also home to one of the largest and most exciting Christmas markets I’ve ever visited in Germany. It would take hours to soak it all in, but I did my best to eat my way through the stalls, do some window shopping and enjoy the massive Christmas tree and illuminated church. It was fun, it was festive and I can’t wait to return.

Maybe it was the bright sunshiny day, or maybe it was the city’s famous smoked beer, but whatever did it, I totally and completely fell in love with Bamberg. It probably sounds repetitive, but Bamberg too has an ancient history, and it too is recognized by UNESCO for its beauty and incredibly intact medieval old town. It’s also so colorful, much more so than I would have thought and with picture-perfect views along the river it was an afternoon I know I’ll never forget. The city’s Christmas markets of course only add to this festive feeling, from smaller ones around town to the massive central Christmas market in Maximiliansplatz.

The granddaddy of all German Christmas markets, I was thankful this was my second visit to one of the world’s most famous markets because it’s size and huge crowds beg for repeat visits. My stop this year was while en route to the cruise’s final destination of Prague, so time was limited. I had to be strategic, and in my case that meant local delicacies I can only find in Nuremberg. Every German city, town and village has a variation of sausage and my own personal favorite is found in Nuremberg. Small sausages grilled to perfection and then served three to a bun make for a manageable but delicious snack or meal. Another snack that varies around Germany are Lebkuchen, sort of like gingerbread cookies but not really. Once again, Nuremberg is home to my personal favorite version of this holiday treat and not only did I eat a few that afternoon, but I made sure to stock up for the entire Christmas season. The Nuremberg Christmas market is famous for a reason, it’s enormous and fun, but that fame also means it gets very busy. Prepare yourself for mega-crowds, but happy ones, all out and about excited to enjoy the holiday.