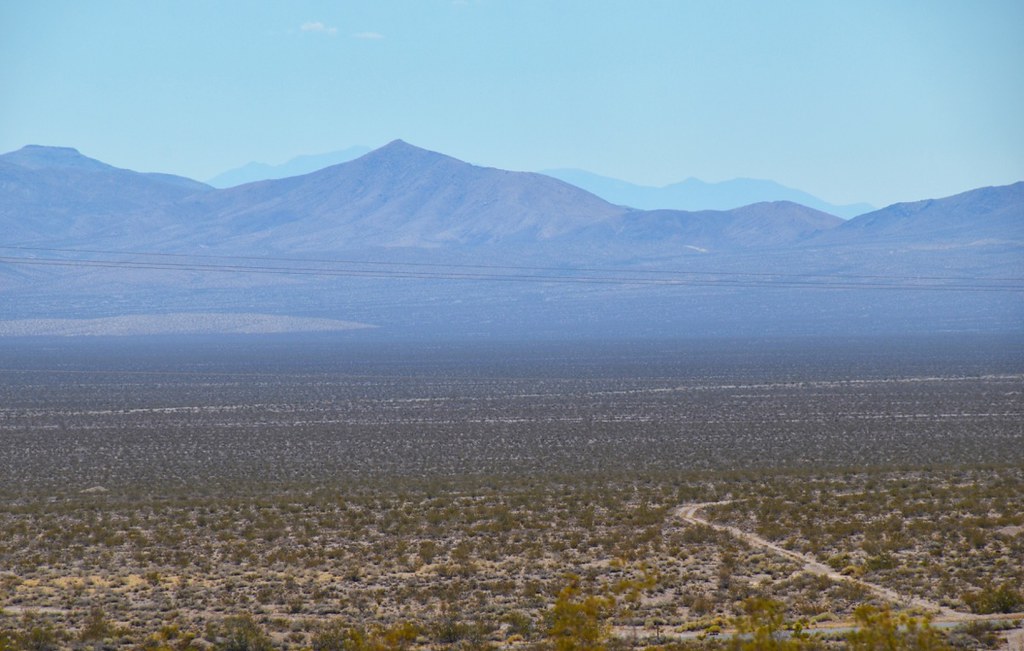 I didn’t expect a lot from the Goldwell Open Air Museum. That’s probably because I hadn’t properly researched it beforehand; instead I visited because it was on my to-do list. Thank goodness I made the short detour to visit this amazing site near the old ghost town of Rhyolite, because it quickly became a personal favorite museum. The concept started back in 1984, when Belgian artist Albert Szukalski installed his eerie sculpture “The Last Supper” against the backdrop of the Amargosa Valley. In subsequent years, additional pieces were added by three other Belgian artists who chose to create their works in relative obscurity in the Nevada desert near Death Valley, even though they were accomplished and well known throughout the European art scene. Now a non-profit organization, the museum has expanded over the years to add to the creative spirit of the site.

The mission of Goldwell is simple, to preserve, present and encourage artistic exploration in and of the Amargosa Desert – an evocative landscape along the eastern edge of Death Valley National Park. That’s actually what brings most visitors to this decidedly off-the-beaten-path destination, its proximity to one of the few outposts of civilization near Death Valley, Beatty, Nevada. After a few hours of seeing not very much, Beatty seemed like the height of civilization. There were multiple gas stations, restaurants and even a Subway sandwich shop. It’s amazing what being out of touch does to one’s perceptions, and for me being in Beatty after a few days of isolation was a welcome sight. Add to that the nearby and starkly beautiful Death Valley, and I understood why the town was packed. After refueling, I continued down the road a few miles until the last signs of civilization had dropped off, again enveloping me in a blanket of space. Then I saw the sign pointing towards Rhyolite and I knew I was in the right place. 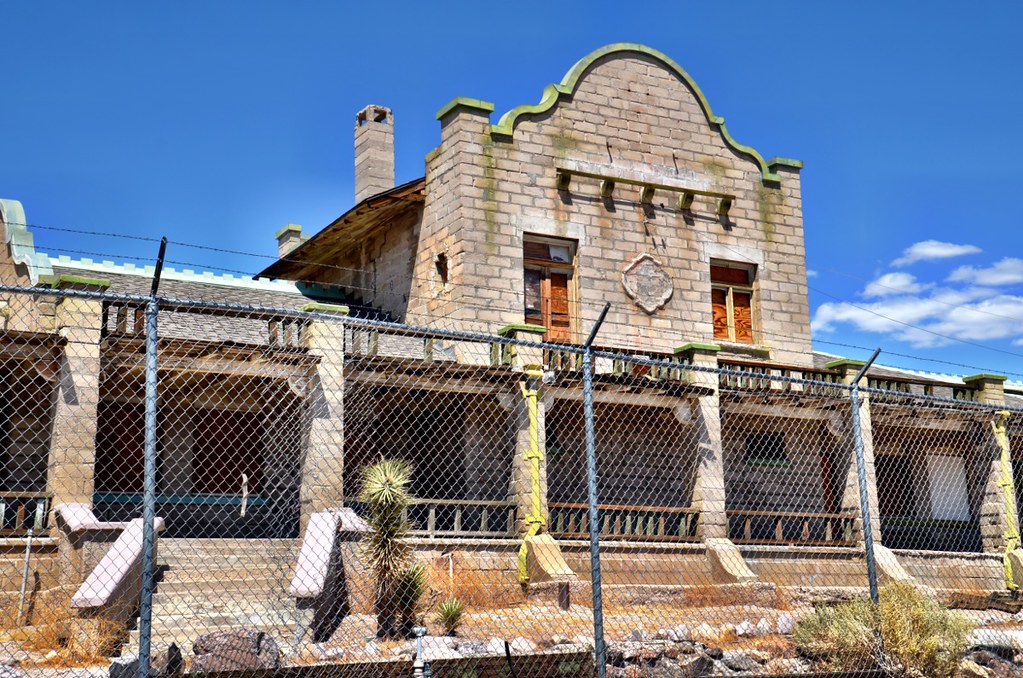 Rhyolite is the classic definition of a ghost town. It sprung from the empty desert in 1905 after a prospecting discovery in the surrounding hills. The ensuing gold rush brought thousands of people to settle in an attempt to make their fortunes. Investment followed and soon the town had running water, telephones, electricity and even a rail connection. At its peak, this was a town of more than 5,000 people, which makes it hard to believe that when the bust happened that number turned to zero by 1920. Thanks to this sudden rise and fall, many of the town’s old buildings stand intact and Rhyolite is used in any number of movies and TV shows. It’s also near this famous tourist site where you can find the Goldwell Open Air Museum. 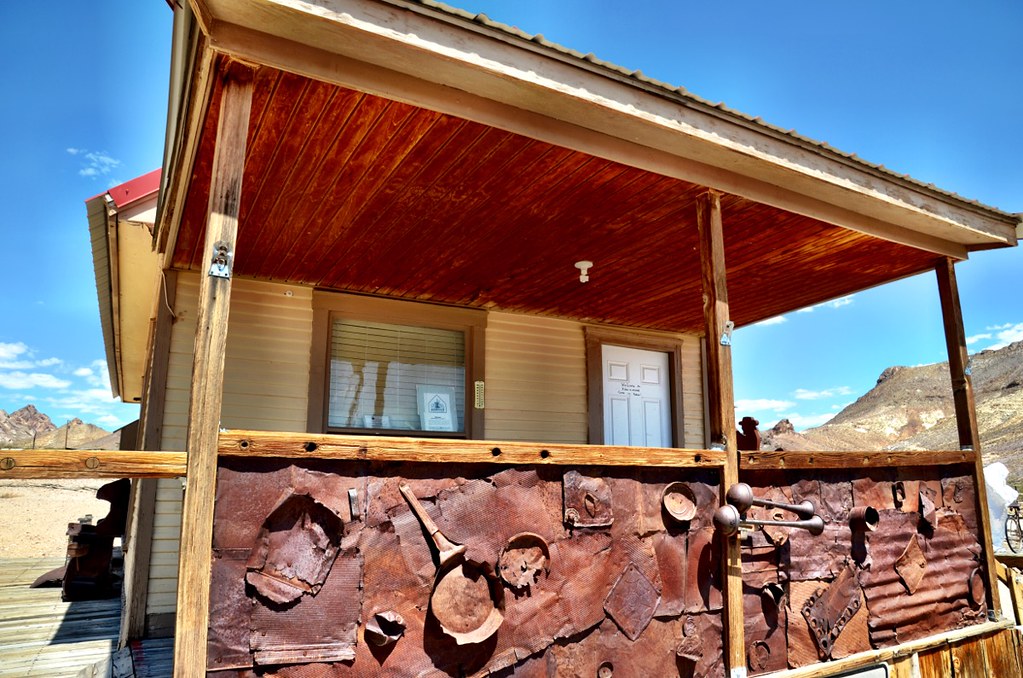 Much to my surprise, I wasn’t the only intrepid soul at the museum as I drove up. One other car was there, a family keen on exploring the sculpture park set amidst the vast stretches of open desert. They soon left and I had the place to myself, which is kind of how I think it ought to be. This is a barren and lonely part of the world, and the pop of color provided by the museum pieces should be enjoyed in solitude, left alone with one’s thoughts. It’s a special place and while art and I don’t always get along, I quickly found myself falling for Goldwell. There’s just something about it that draws in the visitor and I soon became lost in my own thoughts. To really understand the power and impact of the Goldwell Open Air Museum, a visit is necessary, but here are a few of the pieces on display at this extraordinary un-museum that I hope will convince you to visit. 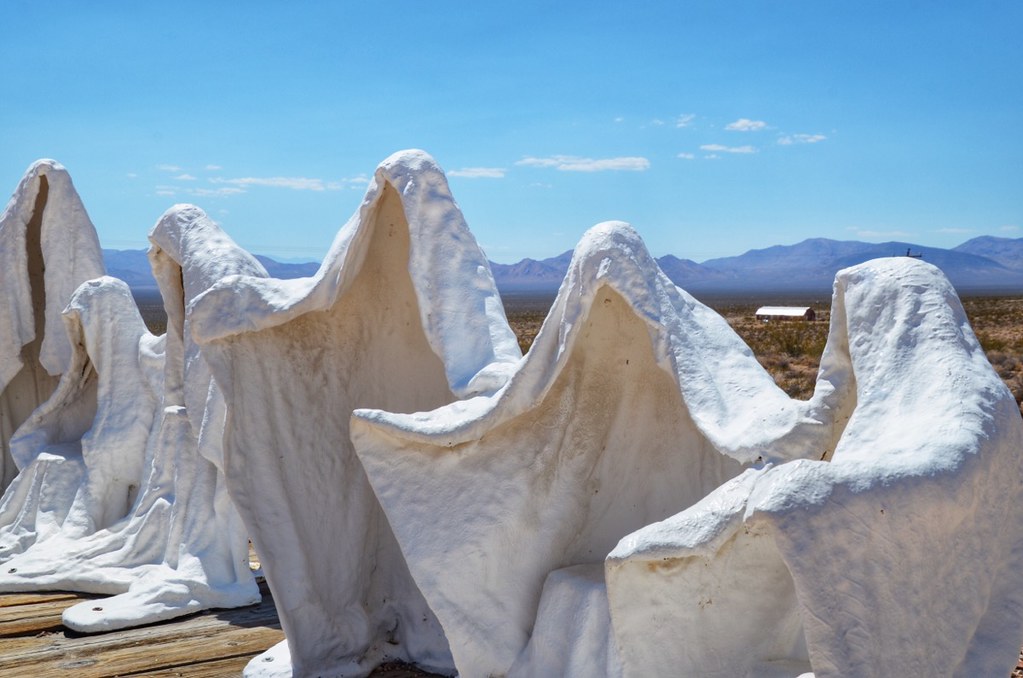 The installation that started it all, “The Last Supper” is a ghostly interpretation of Christ and his disciples sited against the backdrop of the expansive Amargosa Valley. 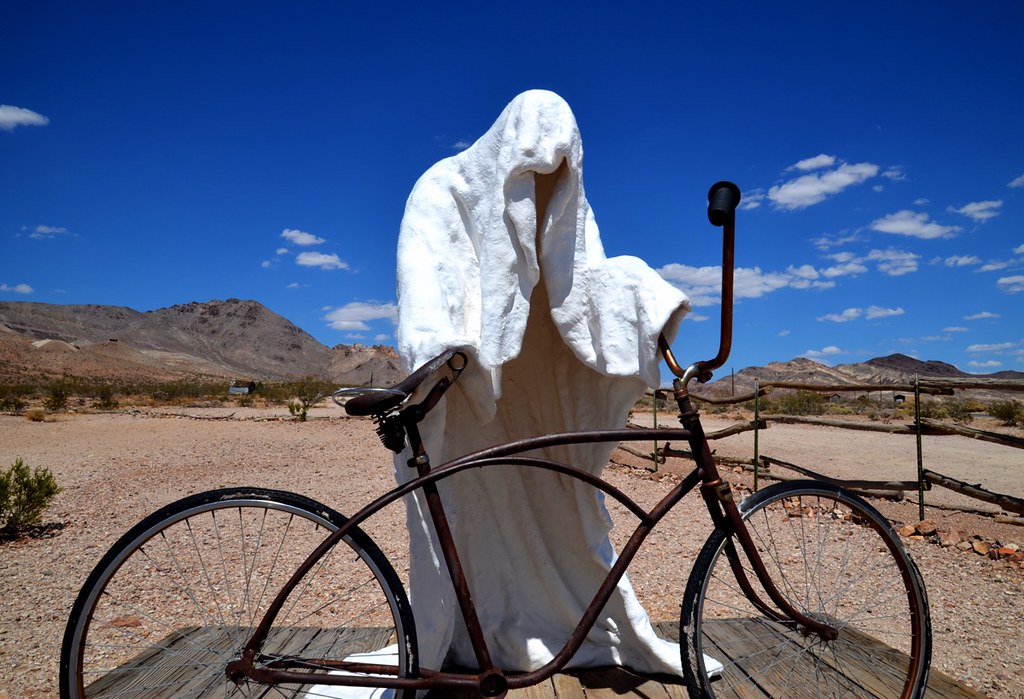 Also by the Belgian artist Albert Szukalski, “Ghost Rider” is constructed in the same way as his other pieces, using live models wrapped in fabric soaked in wet plaster and then posed. The bike actually came from a local Beatty resident.

One of my favorite sculptures at the museum – “Lady Desert: The Venus of Nevada” – was originally inspired by the classical Greek masterpiece “Venus de Milo,” but reinterpreted for the modern era. Taking on a pixilated presence, it’s meant to echo the high tech world we live in. I loved this piece not just for the work itself, but its juxtaposition against the raw beauty of the desert. 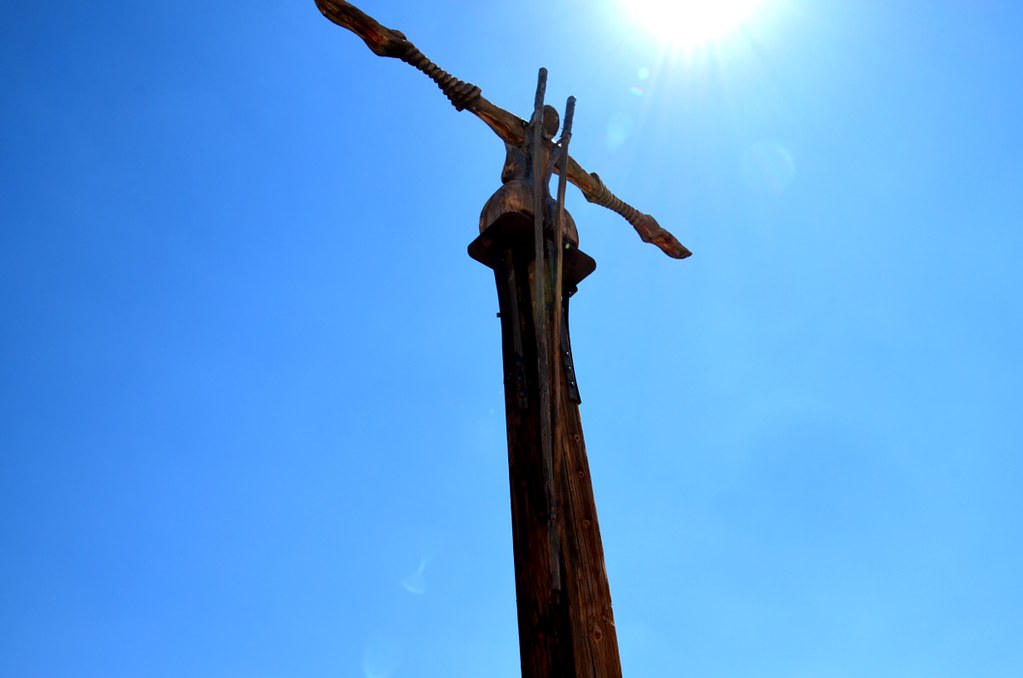 “Icara” represents a female counterpoint to the famous Greek myth of Icarus, the boy who tried to fly to the sun with wings bound with wax. The figure was hand-carved on site.

“Tribute to Shorty Harris” is in honor of a legendary prospector in Rhyolite. His hopeful companion, a penguin, reflects the optimism of the miners’ endeavor.

The “Serving Ghost” was originally commissioned in the 1980’s and was donated to the museum in 2014.

“Sit Here!” reminded me a lot of visiting the Dali House in Spain, but this is actually a newer piece created as part of an artist-in-residence project facilitating kids at the Lied Discovery Children’s Museum in Las Vegas. The couch was rescued and relocated in 2007 where it continues to be restored and maintained.

Nevada surprised me in any number of ways, most notably for small moments of wonder and awe when I least expected them. The Goldwell Open Air Museum is but one of seemingly countless special moments waiting to be discovered in Nevada and I honestly can’t wait to return and see what else lays in store for the unsuspecting visitor.