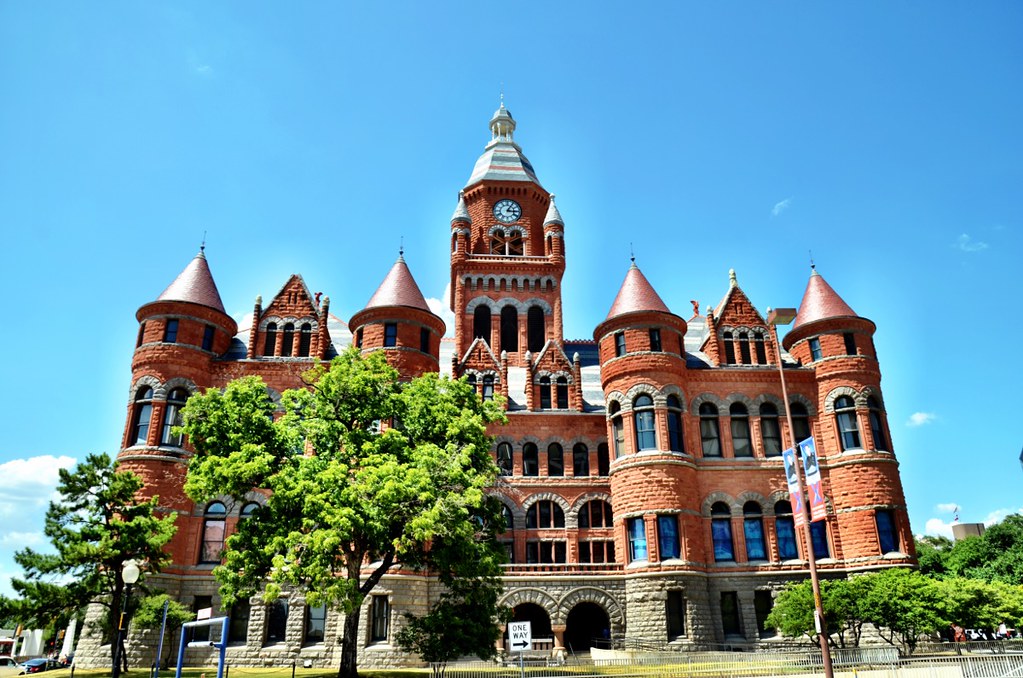 I have to say that before my trip around the country in partnership with The Ritz-Carlton, I had only ever considered Dallas as a business travel destination. That’s my fault, I had never looked into all of the great experiences in and around Dallas that make it a great place for leisure travelers to visit as well. That was my goal during an all-too short day in the city, to find out what exactly tourists can enjoy in Dallas and why it really is such a fun city to visit. 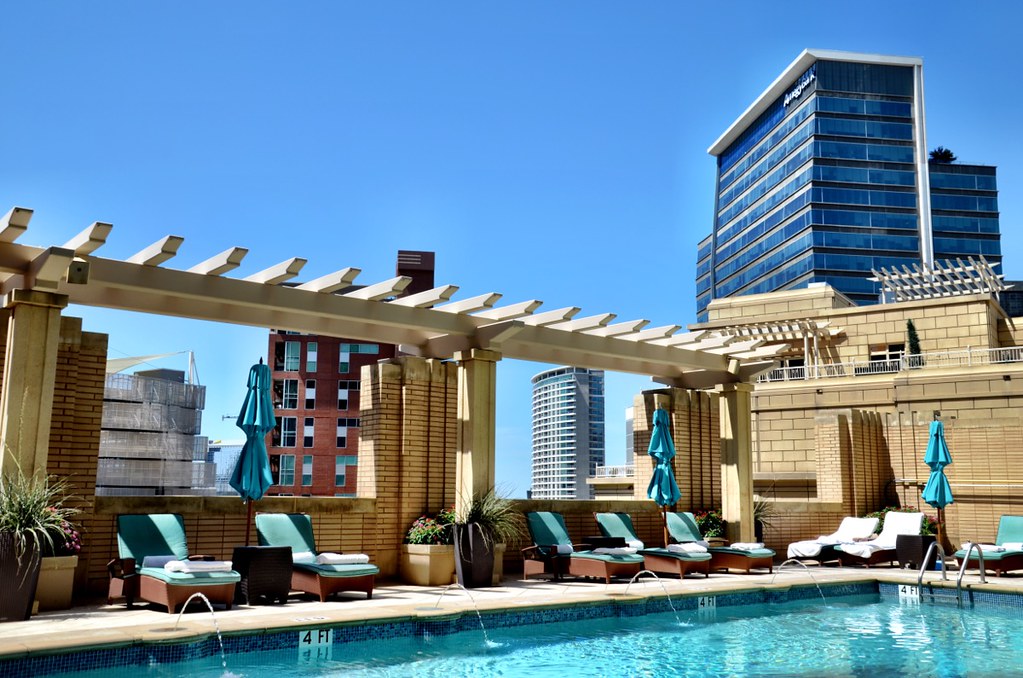 It’s hard not to be impressed walking into the lobby of any property in The Ritz-Carlton family, and that was particularly true with my first introduction to The Ritz-Carlton, Dallas. Greeted by an impressive flower display that is changed weekly, as well as by warm and hospitable staff, I couldn’t wait to begin my experience at the hotel. Located in the fashionable Uptown District, The Ritz-Carlton, Dallas enjoys a fantastic location for shops, restaurants and the arts. It’s also a convenient car ride away from some of the city’s best attractions. The hotel is elegant but without being too stuffy; a fine line for luxury hotels to walk and one that so few accomplish well. As a great example, in the Club Level Lounge you’ll find everything you would expect, from the many food presentations offered throughout the day to amazing wine options. But there’s also a candy bar; a whimsical addition that signals the folks at the hotel don’t take themselves too seriously. I love that, I love the personality it effuses and it instantly made me connect with the hotel in a way I hadn’t previously. This isn’t a bland or corporate hotel, this is a fun and immersive experience that provides the stellar service and quality one expects from any The Ritz-Carlton hotel, but with warm Texas hospitality and that unique Dallas sense of style that has made the city so very famous around the world.

I’d never used CityPASS before, but the company had long ago extended an offer for me to use one if I ever found myself in a city they service, so once I began planning my day in Dallas I reached out to them. If you’re not familiar, CityPASS ticket booklets offer discounted admission to top sites in the following cities: New York City, Atlanta, Boston, Chicago, Dallas, Houston, Philadelphia, San Francisco, Seattle, Tampa Bay, Toronto and Southern California. I’m usually HIGHLY skeptical of such offers, so I was curious to see how it would work out in the end. At the very least, I knew that the CityPASS would help me fine-tune my day exploring the Big D. I decided to visit the three attractions I detail below, and once I totaled up the ticket fees and the cost of the CityPASS, turns out that the ticket booklet was indeed cheaper. However, it’s important to note that in order to realize savings from CityPASS you really do need to do as many of the activities they include as possible. 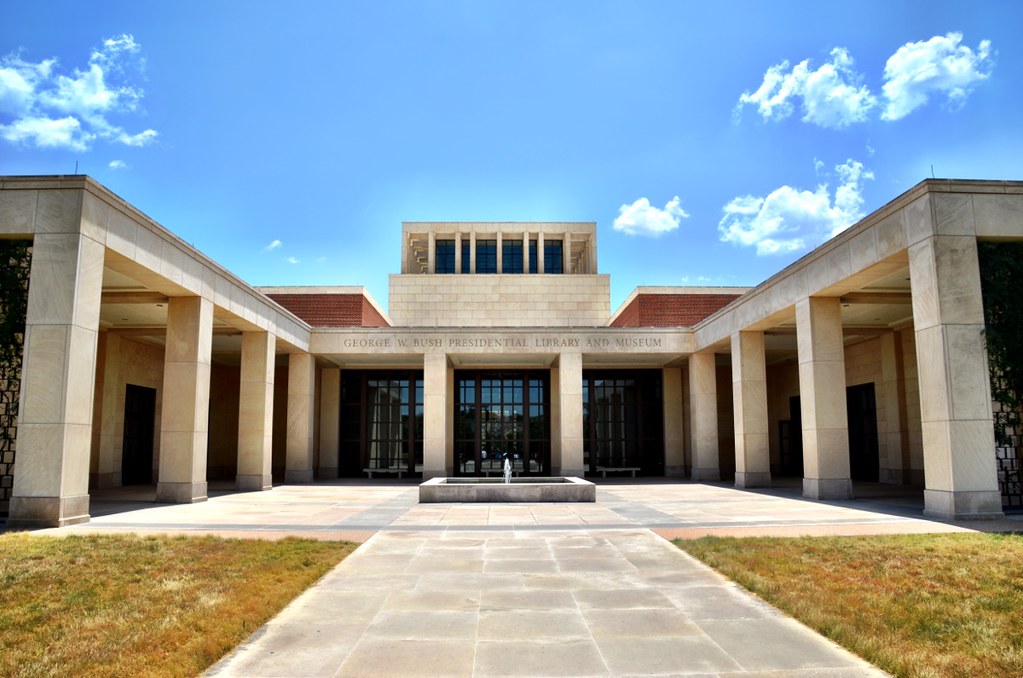 Politics aside, I am a history buff and when presented with the opportunity to visit a Presidential Library I never say no, regardless of whose library it is. That’s how I found myself on the campus of Southern Methodist University in front of the very impressive George W. Bush Presidential Library & Museum. The library and museum opened its doors to the public in 2013 and is the 2nd largest presidential library after the Reagan Library in California. Since I’ve visited similar sites in the past, I sort of knew what to expect. Presidential libraries tend to follow similar methodology, talking about major accomplishments, the era during which the President served and some memorabilia from their Presidency. They also present a very much glossed-over version of events, but that doesn’t mean they aren’t interesting. I love them and I quickly found myself enjoying the George W. Bush Presidential Library & Museum much more than I thought I would. 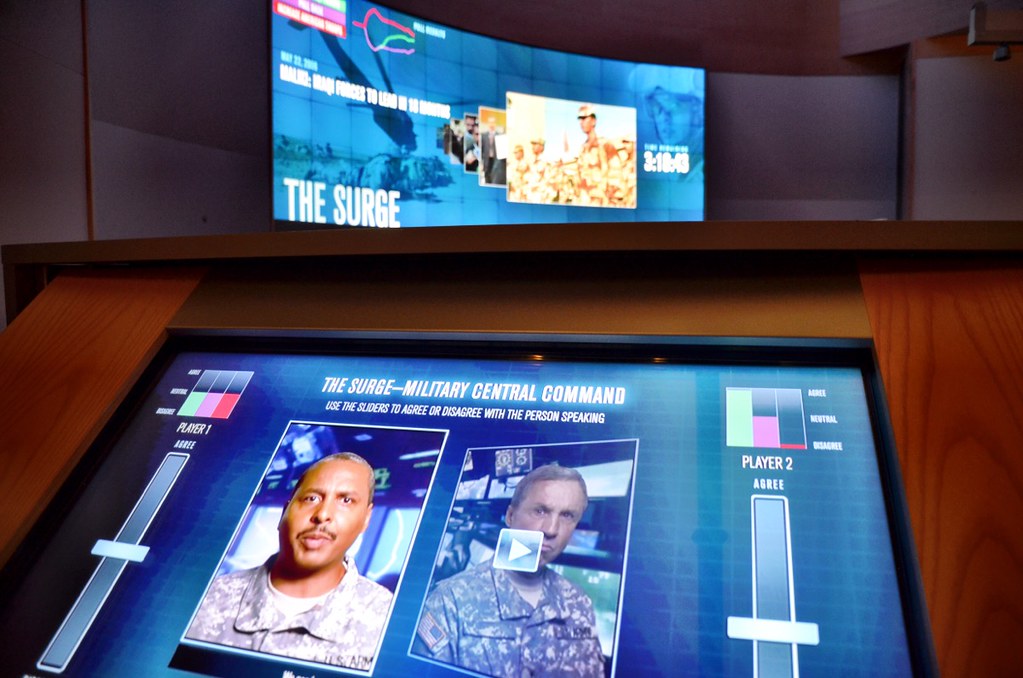 Arranged mostly in chronological order with an emphasis on key legislative and executive branch accomplishments, it was interesting to relive the 2000s through the eyes of the American leader himself. Of course at the heart of the exhibits is 9/11 and the resulting war on terrorism which came to define the decade for many. One feature that was especially interesting was an interactive experience called the Decision Points Theater. This exceedingly well-done activity presents the room of visitors with different crises to address. Majority rules, and once participants choose a crisis then the program runs through with key facts, interviews and more to help everyone reach a decision on how they would approach the situation. At the end, you learn how the majority of participants voted and then the President appears on the screen to share what he did in reality. It’s a fascinating look into what surely must be the hardest job in the world.

I’m always on the lookout for interesting views for photos and one of my cardinal rules is to get as high up as possible. Well, in Dallas that means a visit to the Reunion Tower and GeO-Deck. Also known as The Ball, it was built in 1978 and features a geodesic dome at the top to which guests take the 68-second elevator ride more than 500 feet to reach the observation deck. It’s a little hokey, but the views are undeniably beautiful. From the top of the tower I gained a much better understanding of the layout of the city, and even spotted a few of the other attractions I wanted to see. It’s also pretty easy to get to, a short walk from Dealey Plaza and what I consider to be one of the best museums I’ve ever been to – The Sixth Floor Museum. 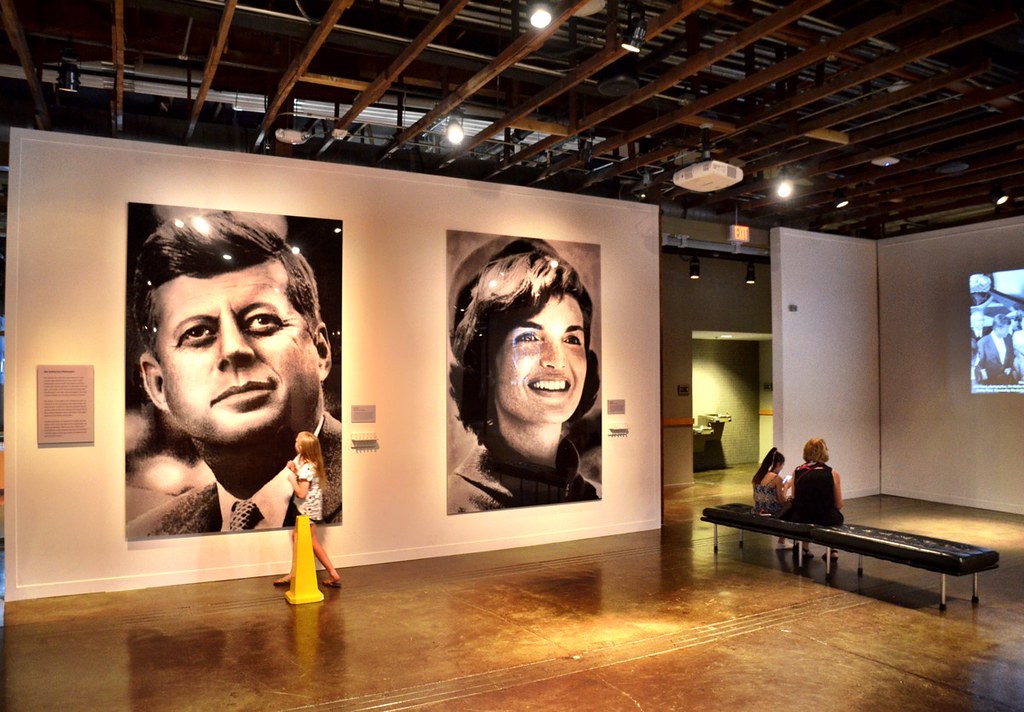 If you were alive on November 22, 1963, it’s a day you’ll never forget but even if you’re like me and missed the event by many years, the date still has incredible importance for you. That was when President John F. Kennedy was assassinated at Dealey Plaza in Dallas. The plaza itself is now a National Historic Landmark, thankfully preserving it for future generations, but that’s not the only important site preserved. Located in the very building where Lee Harvey Oswald fired those far too impactful bullets (formerly the Texas School Book Depository) is today the exceptionally well-curated Sixth Floor Museum. 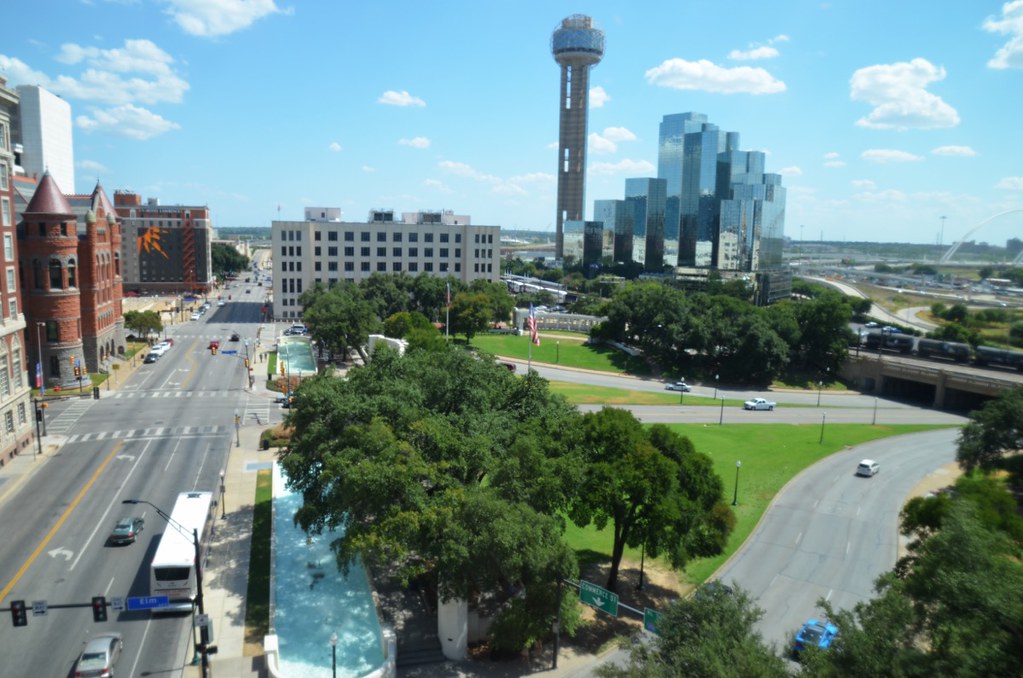 Using photos, film, narration and interactive displays, this thorough and very well researched museum takes guests through the turbulent era of the early 1960s, the events that led to the President’s assassination and ultimately the murder itself, along with the impact Kennedy’s death had on the world. Standing there in the same position as Oswald once stood, looking out across at Dealey Plaza was an eerie feeling, it brought the event to life in a way that has always been hard for me, since I wasn’t alive in 1963. I can’t recommend this museum strongly enough, it really is just that good.

Amazing Food at The Ritz-Carlton, Dallas

Food is an incredibly important aspect of the travel experience, and that’s especially true in Dallas. An international and multicultural city, you can find influences from around the world in this metropolis, but ultimately Dallas is best know for its classic Tex-Mex and southern-inspired meals. Luckily, The Ritz-Carlton, Dallas has embraced this love of Texan cuisine, thanks in large part to celebrity chef and author of the Texas Food Bible, Dean Fearing. His restaurant at The Ritz-Carlton, Dallas is routinely named one of the best in town and after enjoying an expansive meal at Fearing’s, I understood why. Tortilla soup, Dr. Pepper braised short ribs and even an amazing banana pudding were all part of my culinary introduction to Dallas, but the best was yet to come. The first hotel in the world to feature a professional Guacamologist™, every day at 6pm sharp guests (and locals) congregate in the lobby to watch a master chef whip up what is thought to be the best guacamole in the state, if not the country, entirely from scratch from the freshest of local ingredients. It’s fun, it’s a little quirky and it’s delicious.

Dallas has a lot to offer the casual visitor, as I learned during my stay. From world-class museums to delicious food and world-class luxury accommodations, it’s hard not to love Dallas and instantly vow to return.