I expected a lot from my flying experience with Turkish Airlines – their reputation for an outstanding Business Class experience is well known. I wasn’t only flying with them on the long-haul flights between Washington and Istanbul though, but also on the medium-haul flight between Tanzania and Istanbul for my safari with Abercrombie & Kent. This gave me a somewhat unique opportunity to test out not only what I would call a flagship experience on the longer leg, but what a more reduced service on the shorter leg was like. Not all Business Class experiences are made the same, and that holds true even within the same airline. Service and quality can sometimes sadly vary, but throughout all my hours in the air with Turkish I was surprised by one thing – that service never really varied very much at all. To help you all make the best decisions when you travel, I thought I’d provide a brief look into what flying Business Class with Turkish Airlines is like on both their long-haul and shorter flights.

Long-Haul flight between Washington and Istanbul on the A330-300

Airlines go to great lengths to keep us distracted, but one thing remains at the core of any Business Class experience and that’s the seat itself. Ultimately, that’s why someone like me who is tall enjoys flying up front; for the ability to stretch out, relax and get some rest. On the A330-300, we enjoyed the extra-long, lay flat beds that Turkish has been trying to promote lately. One thing that set this experience from other airlines apart though was the Bohça bundle. Drawing upon traditional Turkish culture, it includes a sleeping pad, quilt, sleeping pillow, waist pillow and slippers. It was an entire sleep experience and is something many times I see reserved for First Class guests only. When I was ready to sleep, the flight attendant assembled the bed for me, fitting the sleeping pad around my seat and in less than a minute my chair had transformed into a comfortable bed. I’m tall, so the ability to sleep comfortably on a flight is hugely important to me, and also hard to achieve. But it was late, I was tired and this near-perfect sleep setup allowed me to get several hours of rest, arriving into Istanbul a little groggy maybe, but not my normal exhausted self.

Entertainment options is also worth a mention because the service is so much better than most other airlines I’ve flown lately. The options were frankly overwhelming with many choices of movies and TV shows that all appealed to me. Granted, this is subjective, but so is this post so I’ll continue by saying that too many airlines devote far too little attention to creating a fun inflight entertainment product and so it’s noticeable when an airline like Turkish actually does it well. Add in the complimentary use of noise-cancelling headphones, and it was the perfect environment in which to relax and enjoy the flight.

More than anything else, food is where Turkish Airlines clearly excels and in all honesty, their inflight meals are the best I’ve ever seen (so far) on an airplane. Turkish Airlines uses inflight chefs, cheery folks dressed in chef whites and big floppy hats who are there for one reason only – to prepare outstanding food. Immediately after takeoff, the service began in what was ultimately a three-hour progression of snacks, appetizers, main courses and desserts, all individually served. As the meal began, flight attendants set up our linen and silverware-laden trays including a special touch I’d never seen before while flying, flickering tea lights using LED bulbs. It’s a small thing and ultimately probably not necessary, but it was a wonderful small detail that made everything seem extra special. Main course options were dutifully noted and carried out and upon arrival they looked nothing like airline food I’d seen in many other Business Class cabins. There wasn’t even an inkling of an aluminum container to be found, instead the meals looked handcrafted specifically for each of us. It really felt like eating in a restaurant and the best part was that it was delicious as well. I have a massive sweet tooth, so dessert was my favorite aspect of the dining experience. Flight attendants wheeled carts laden with desserts of all kinds, allowing me to pick and choose exactly what I wanted. The flight attendants didn’t just plop the food on the plate either, they took the time to delicately arrange it on the plate, the final product looking like the result of a fine-dining education. That service can’t be taught, it just has to exist. I’ve flown with many airlines where all I get from flight attendants is attitude and heavy sighs and complaints. That just doesn’t exist on Turkish Airlines; instead I felt like a valued guest, which was a nice change. 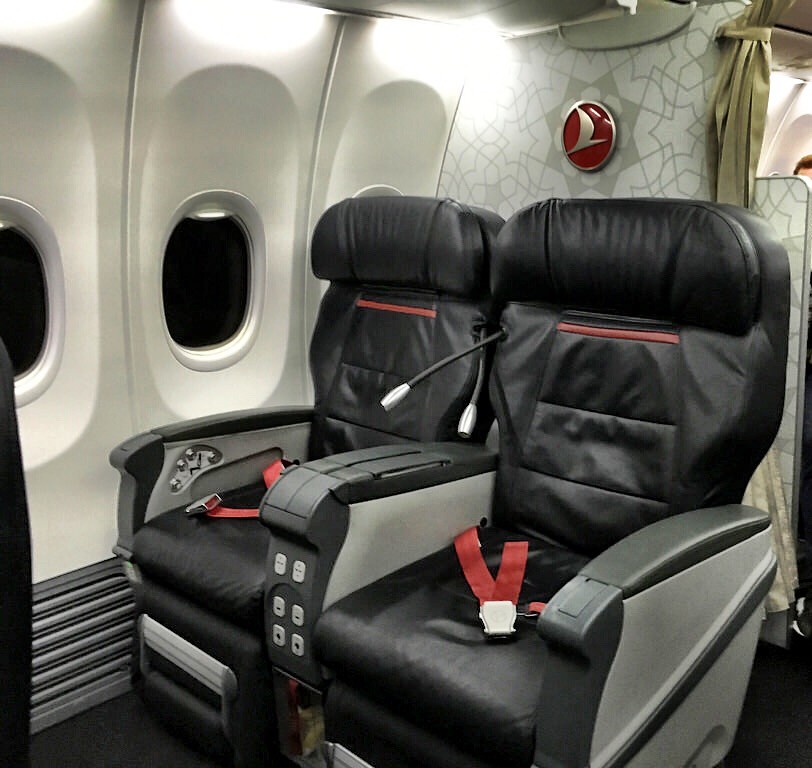 Medium-haul flight between Istanbul and Mt. Kilimanjaro Airport on the Boeing 737-900ER

The fact that a 737 could make the 7-hour flight to Tanzania is amazing in its own right, but so is the ability of Turkish Airlines to maintain fantastic standards on a plane much smaller than the A330-300. Given the size of the plane, naturally the Business Class experience is different and that’s to be expected. Since the plane is a narrow-body aircraft, the Business Class section is much smaller and the chairs themselves are of an older variety; what we’d typically find on a domestic US flight. But that doesn’t mean the experience wasn’t a comfortable one, it certainly was and I thought made the perfect way to end my luxury travel experience to Tanzania. Leaving at the bizarre time of 2:40am, all I wanted to do was sleep en route to Istanbul and thanks to the service and quality found onboard, I was able to do just that. Many of the trappings found on the longer flights don’t exist on the smaller aircraft, but that was fine. I had all I needed and enjoyed several hours of blissful sleep on the way back home. Luckily the same entertainment unit was on the smaller aircraft so that when I did eventually wake up, I had plenty to watch to keep myself occupied for the hop back to Istanbul.

While the smaller planes don’t have chefs, the food options are just as impressive and so much better than one sees on comparable aircraft. For whatever reason, food is something that Turkish Airlines understands and does well. You won’t find those disgusting pepper infused, mushy omelets here, instead you’ll find meals that both taste fresh and remind you of the broader Turkish culture. It’s a nice way to tie everything together and made the experience immediately before landing pleasant and enjoyable. This ability to scale services and products seamlessly across the fleet is a challenge all airlines face, but I was really impressed with how Turkish Airlines managed to accomplish that with apparent ease.

Of course one of the best aspects of flying Business Class with Turkish Airlines is for access to their over-the-top lounge in Istanbul Atatürk Airport. The main lounge in Istanbul is more than 65,000 square feet across multiple levels and can accommodate thousands of people every day. That’s a far cry from the sometimes claustrophobic lounges I’ve experienced in all corners of the world. The lounge also has everything anyone could ever possibly need to while away the hours before your flight including: billiard hall, library, cinema, media walls, miniature model car and plane setups, virtual golf, private relaxation rooms, showers, on-call masseurs and enough food to feed a small city. Also spread throughout the lounge are any number of stations, both large and small, with dedicated chefs all created some amazing dishes and snacks. Traditional Turkish meals, snacks and desserts are all on hand as is a great selection of international fare. A personal favorite was the baklava station, which, along with a cup of strong Turkish coffee, gave me more than enough energy to get through my layover. Walking through the light and airy upstairs of the lounge I was suddenly met with a green and bright cafe, reminiscent of those fantastic tea gardens found throughout Istanbul. I couldn’t believe that I was still in the middle of an airport, and sitting down to enjoy a light snack transported me away from the confines of the industrial building to a much more calm and serene space. When is the last time you felt that way inside an airport?

I’m a very picky person and can usually find fault with almost everything. I’m being very honest though when I say that from start to finish, my experience flying with Turkish Airlines was one of the best I’ve enjoyed in a long time. They really didn’t make any mistakes and everything from those very important seats we call home for hours on end to the entertainment offerings and of course the food were all expertly executed. What’s most important though is that it was fun. I thoroughly enjoyed flying with them and didn’t deal with some of the minor annoyances I’ve found flying Business Class with other airlines. No, Turkish Airlines does everything right and it’s for that reason that I think they’re not only the best choice to reach many places in Africa, but around the world as well.