I’m not sure when I first heard of the Crater, it could’ve been on 60 Minutes or reading a book about trekking through Africa. Regardless of when I first learned of this almost-mythical place in Tanzania, I knew one thing – that I desperately wanted to visit. The photos and stories were almost too good to be true. A quiet valley in the caldera of an ancient volcano so lush and fertile that it can support wildlife all year. A destination where animals never leave, instead choosing to stay put amongst the grasslands and mini-forests of this small enclave along the Great Rift Valley. It sounded a lot like a modern day Garden of Eden, and every ounce of wanderlust in my body was pointing me in its direction. It’s actually a major reason why I choose the Abercrombie & Kent itinerary around Tanzania, for the unique access they provide to this legendary destination. After spending two days in and around the Ngorongoro Crater (which I can now spell without assistance, thank you very much) I can attest to one thing – that it truly is as amazing as promised and that the experience of living it in person is unlike anything else I’ve ever done.

This UNESCO World Heritage Site is also the world’s largest, inactive, intact and unfilled volcanic caldera. That’s a lot of superlatives for a crater that was formed around three million years ago. Today, the Crater is home to around 25,000 large animals including the black rhinoceros, Cape buffalo, hippos, elephants and the densest known population of Maasai lions. But these numbers do little to convey the magic of the experience itself.

The night before we stayed at the Sanctuary Retreat Ngorongoro Crater Camp, located in the Conservation Area on the crater’s rim. This luxury-rustic camp is the best spot from which to launch a discovery of the Crater itself, as I learned when the drive down the next morning took only a few minutes. The sun was still rising, casting a pink hue across the massive grasslands and the early morning wildlife already grazing across the plains. The Crater is only 12-miles wide, but it seems much bigger, especially when you’re the only ones within sight. That would change later in the day as more day-trippers arrived, but for that moment we were alone, lost in our thoughts with only the whinnies of nearby zebra to interrupt them. 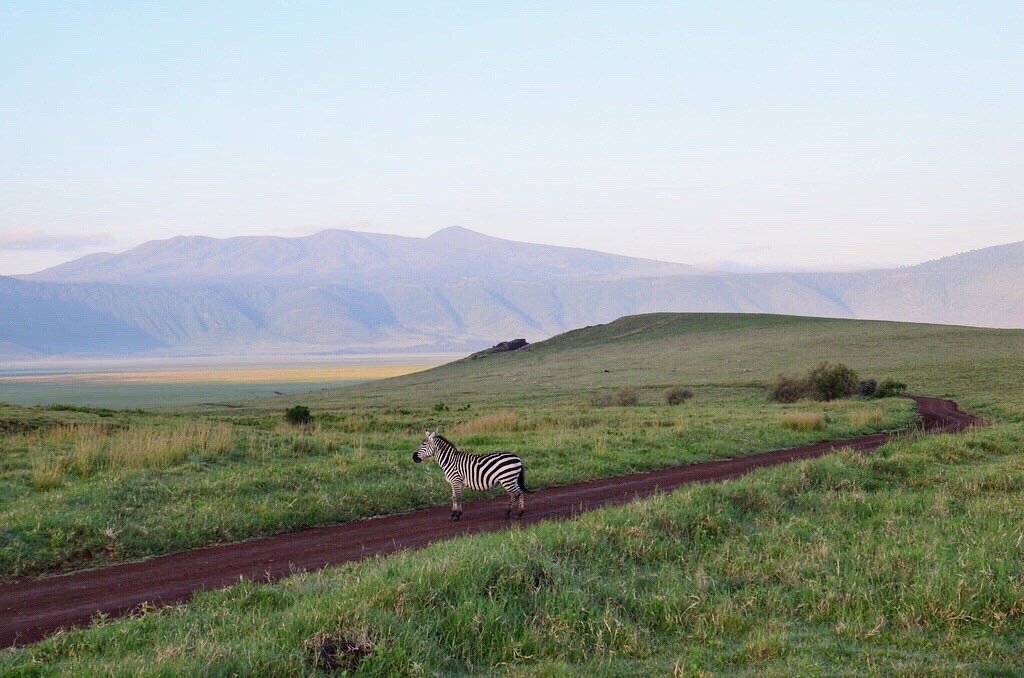 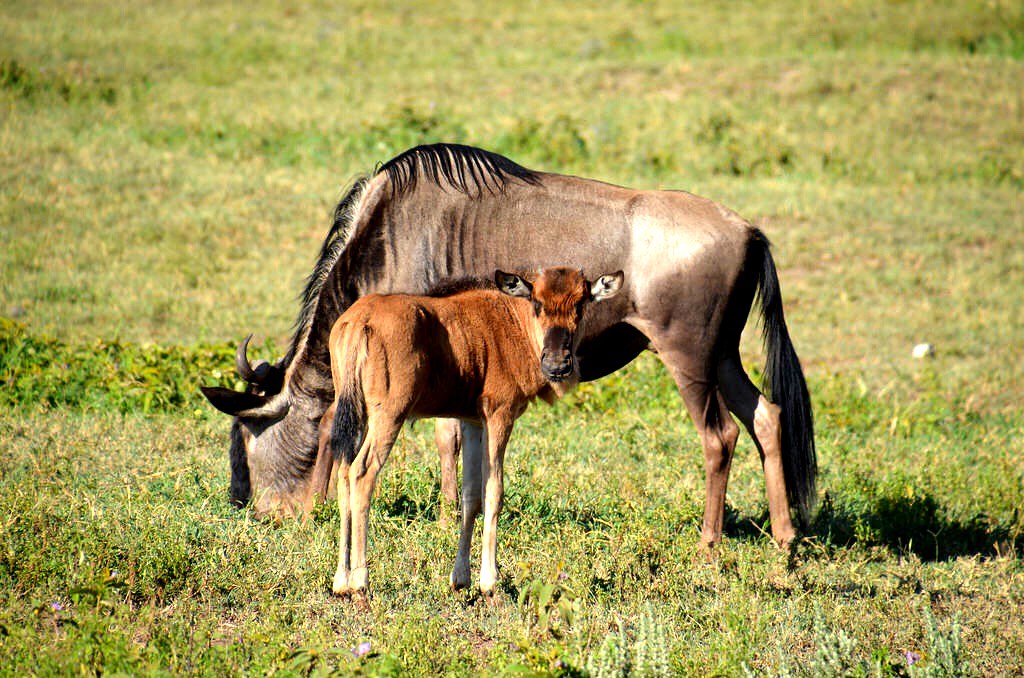 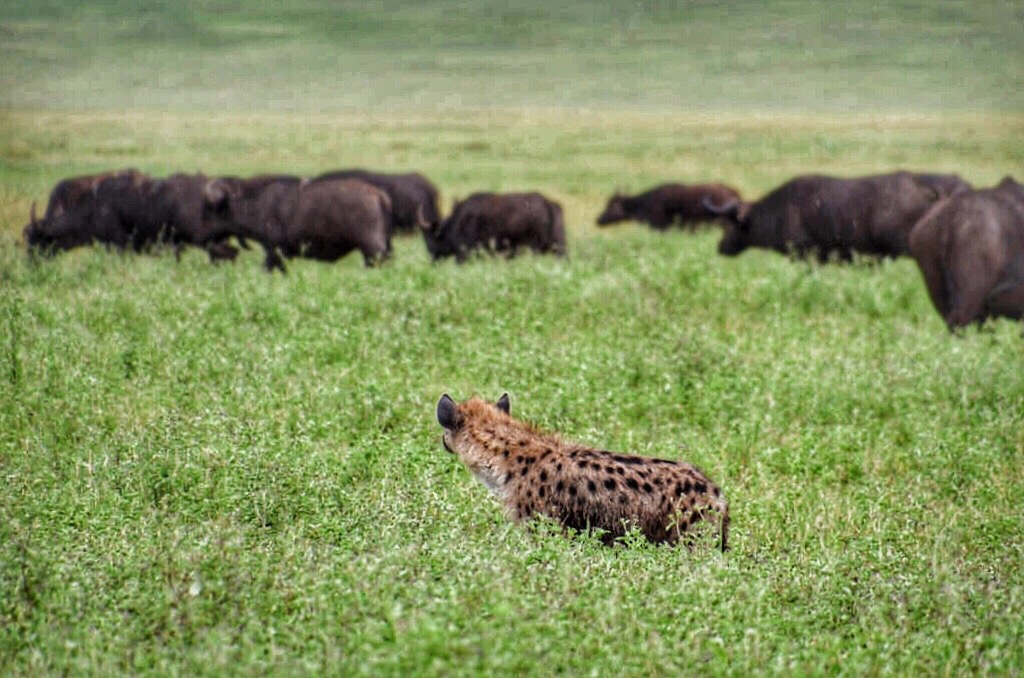 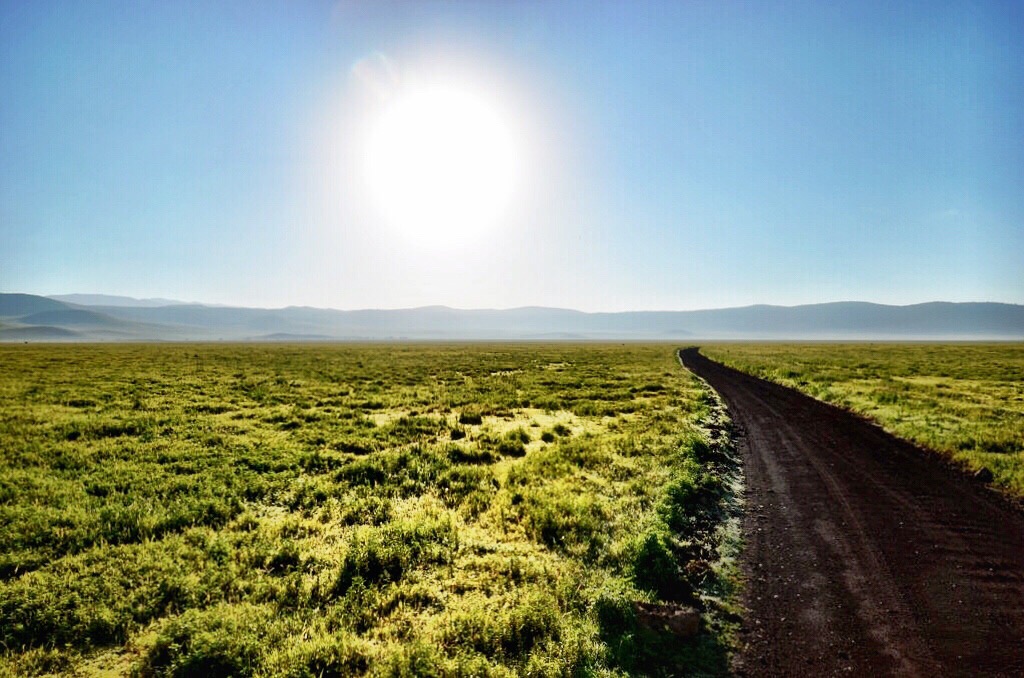 It had rained overnight and I was worried it would keep some of the animals away, but that morning was clear and cool and I shouldn’t have been worried. Standing up tall in our safari truck, we soon spied one of the stars of the crater, a black rhino far in the distance. Our expert Abercrombie & Kent guide quickly grabbed his binoculars, took a peek and said that the rhino would soon cross the road in front of us. I’m not sure how he could tell that, the rhino was surely at least a mile or two away, but there we sat waiting. And soon, much quicker than I would have imagined, the classic zigzagging walking style of the massive rhino came into plain sight. As he approached the road he stopped to consider the newly assembled group of safari trucks before continuing on, crossing the road and disappearing once again into the distance. Our guide was right, just the first of dozens of similar moments we enjoyed that day. 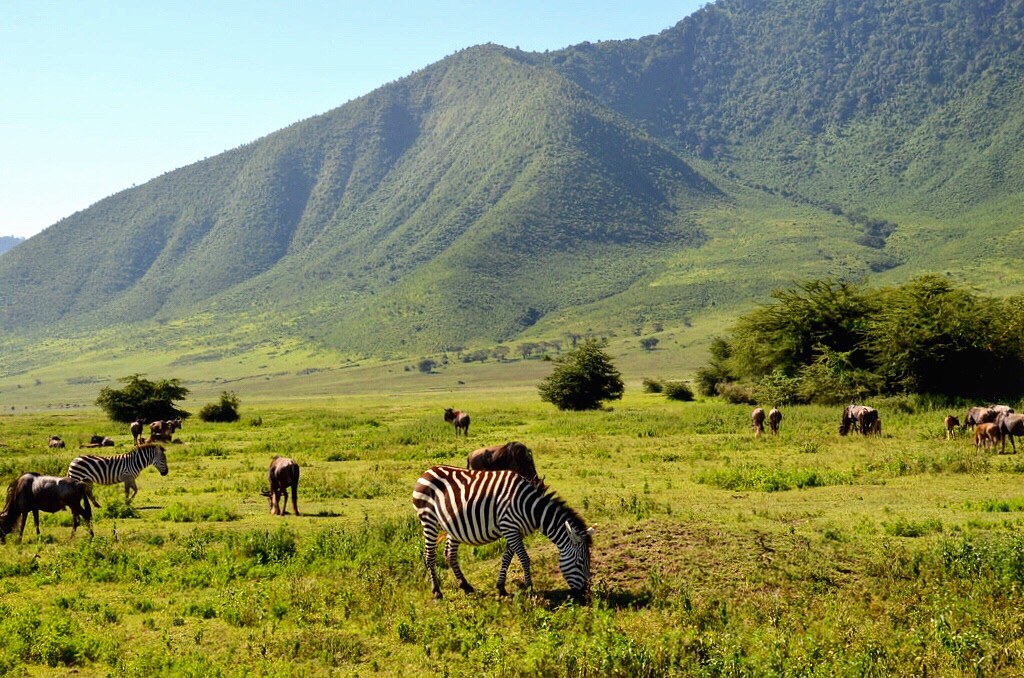 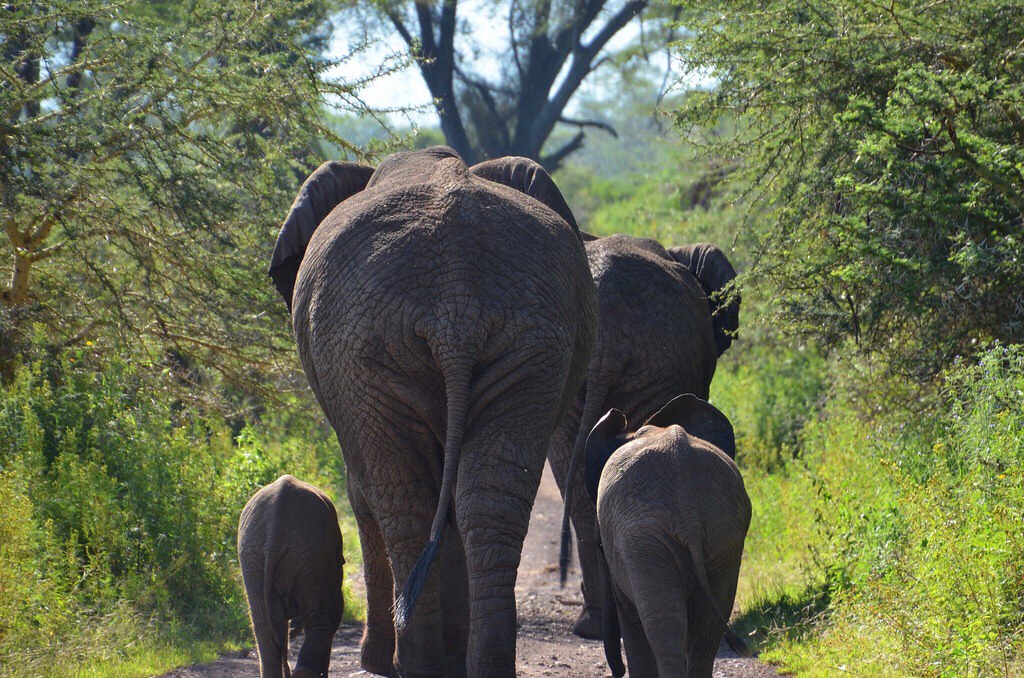 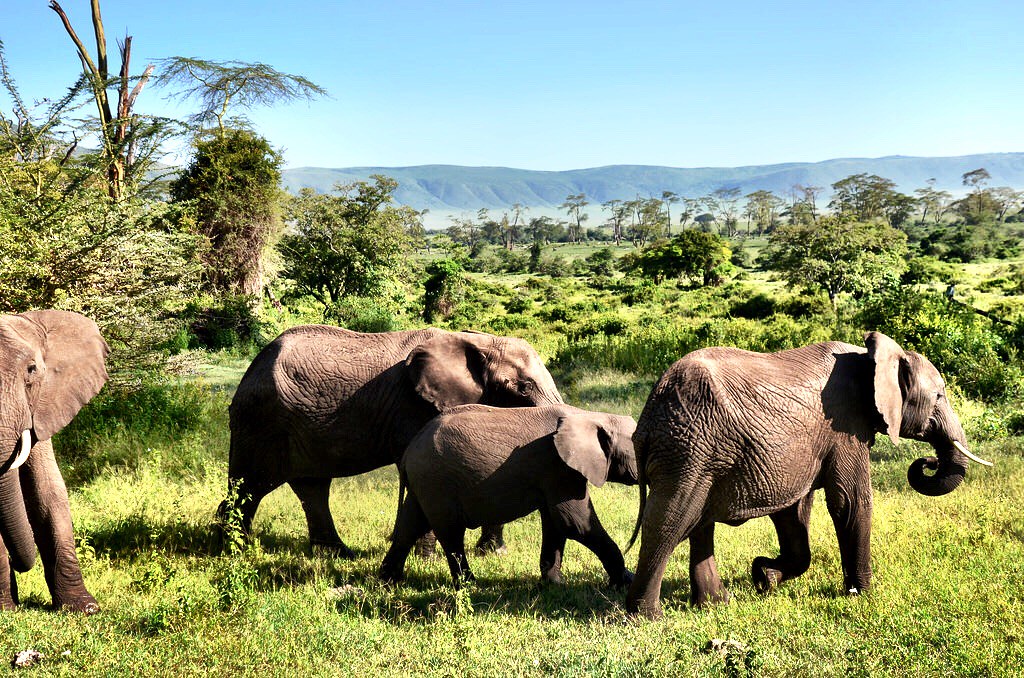 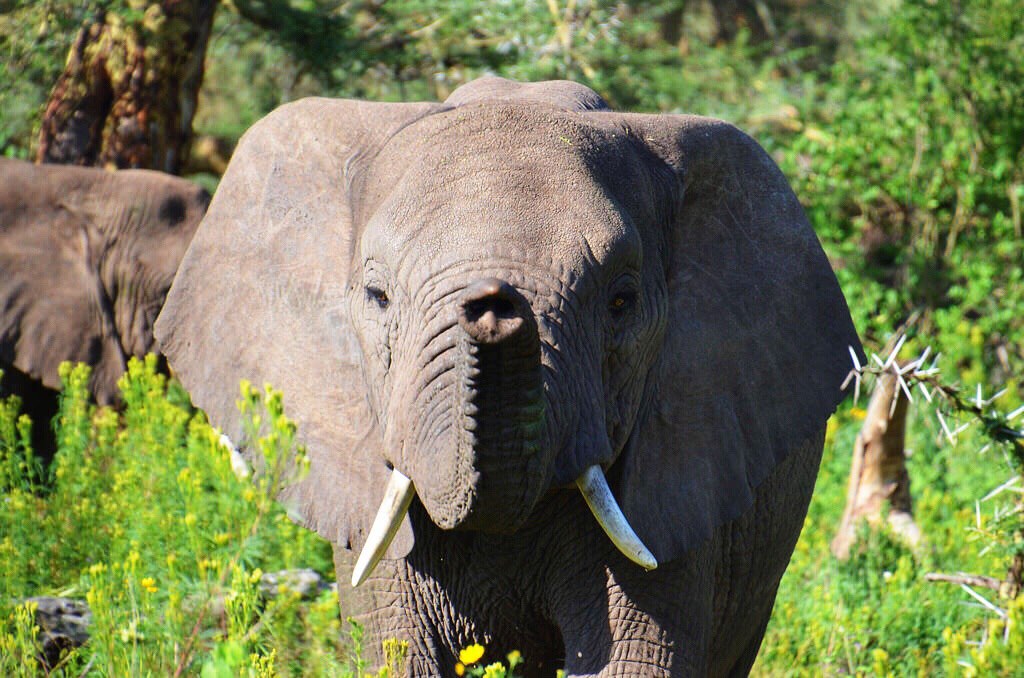 When embarking on safari, the guides make all the difference. It’s essential that someone who is truly an expert in tracking and finding wildlife guide you throughout your adventure, whether it’s in the Ngorongoro Crater or anywhere else in Africa. That’s one of the best aspects of traveling with Abercrombie & Kent, they created the modern day concept of photo safaris and their guides are the best on the continent. This isn’t opinion, it’s fact and was proven to me throughout our time in Tanzania, but especially our day traveling the entire width and breadth of the Crater. It’s not just about the ability to find wildlife, it’s about understanding their habits and tendencies. It’s about noticing even the smallest of details that in turn lead to amazing discoveries.

And the very full day exploring the Crater was one of nearly continuous discoveries. It’s a one-stop-shop for African wildlife, from elephants wandering through the lush if not small forests to countless zebra and wildebeests, birds like the flamingo and more fearsome animals like Cape buffalo, hippos and multiple prides of lion. There were a few key moments though that were important to me, including one of the best picnics I’ve ever enjoyed. 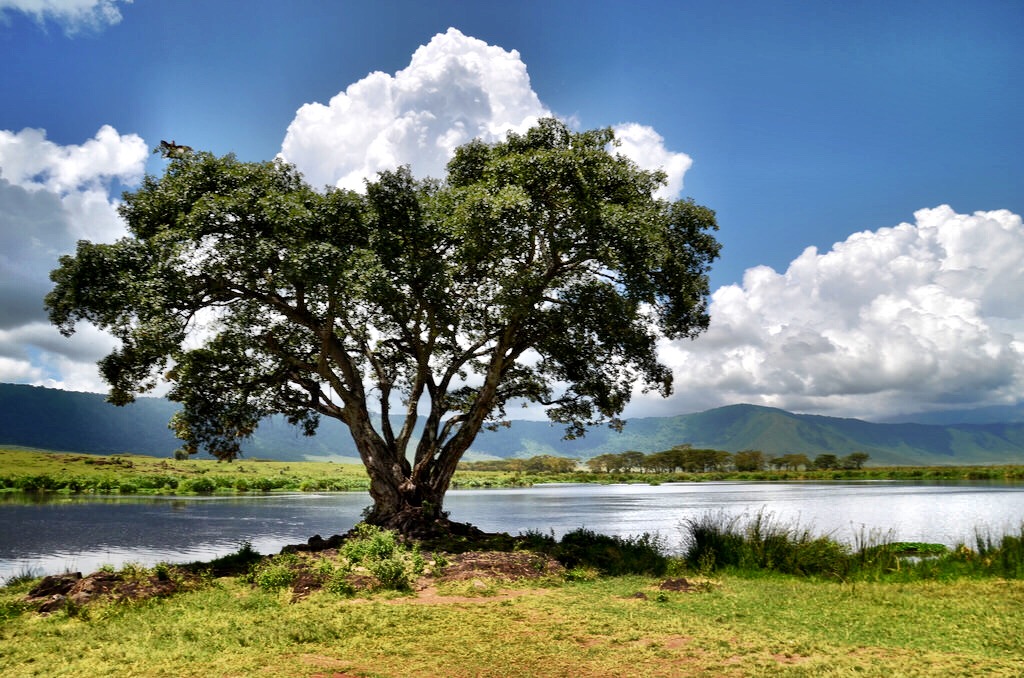 Getting out of a safari truck is never a good idea, who knows where a lion may be lurking. In the Ngorongoro Crater though there are a few spots where it is safe to get out and where there are facilities for guests, including a popular spot surrounding a huge swamp home to hippos, lions, zebra and more. It was there where our guide unpacked our picnic lunch prepared by the staff at Sanctuary Retreats, a white linen affair with multiple courses and silverware and fine china, all placed lovingly inside an old-fashioned picnic basket. Standing there hungrily inhaling the delicious meal, it was so remarkable not for the quality of the food, which was very good, but for where I was. Standing there watching for signs of life in the hippo pool, and trying to ignore the slightly curious herd of zebra just a few feet away. It was a surreal experience and I remember at the time thinking, “Who gets to do things like this?” It’s but one more example of why a Tanzania safari isn’t just a special experience, but an important life experience as well. 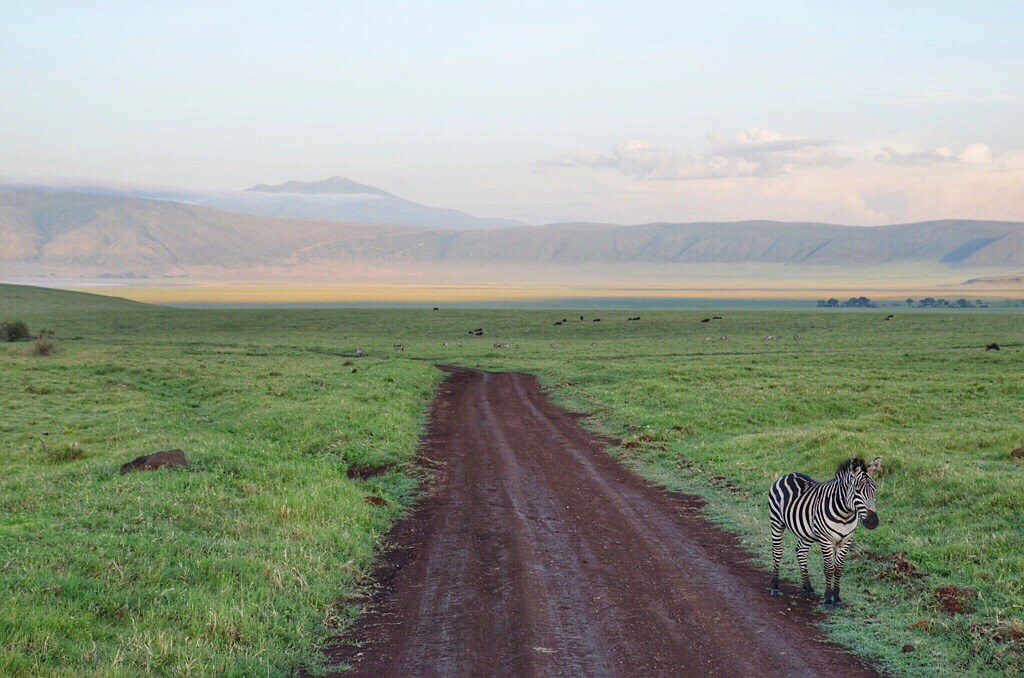 Safari and game drives are addictive. They’re completely unpredictable, so there’s the feeling that if you stay for just 5 more minutes you’ll find something new and different. But at some point you just have to stop, and by the late afternoon we were all exhausted. One wouldn’t ‘t think that sitting in a truck for 8 hours is exhausting, but it is. Not only is it physically tiring, but it’s a mental exercise since you’re always looking, trying to see something out amongst the tall grasses or up in those verdant and lush tree canopies. So it was with great hesitation and a little bit of sadness that we did eventually drive out of the crater, knowing full well that we would probably never return. Later that evening I sat in our luxury tent at the Retreat, pretending to read a book but in reality thinking about the day. Wildlife experiences are important to me and are almost always my favorite travel moments throughout the years. I knew then, as I sat there rereading the same page of my book that my day spent in Ngorongoro would be something more than just a nice travel experience. I knew that it would instantly catapult itself as one of my most important travel experiences. There next to the tortoises of the Galapagos and those funny penguins of Antarctica, I surmised correctly that watching the sunrise with my new zebra friends would be something I would never forget, a “pinch me am I dreaming” moment that I will reflect upon for the rest of my life. Even now, barely a month after the experience I know that I was right, and I am so very thankful for the remarkable opportunity to experience one of the true natural wonders of the world.