From 1900 to 1903, Wilbur and Orville Wright trekked to the Outer Banks from Dayton, Ohio to perfect their heavier-than-air flying machines. Why the Outer Banks? They poured over data from the U.S. Weather Bureau and discovered that the Outer Banks of North Carolina provided some of the steadiest winds in the country in an area where they couldn’t hurt themselves too badly. At that time, the area around Kitty Hawk and Kill Devil Hills were all natural sand dunes, providing both the height and soft landing needed to work on their gliders. It was with this in mind as I drove down the Croatan Highway leading to one of North Carolina’s most beautiful regions to try my own hand at hang gliding.

I’ve visited the Outer Banks, a string of barrier islands off the coast of North Carolina, many times but usually just to enjoy the beach and all the summertime activities the various communities have to offer. Working with North Carolina and The Outer Banks Tourism Boards though, this trip was a little different. This time I was there to learn more about the area itself, and that education started with a quick visit to the Wright Brothers National Monument. Located on the site of their successful attempts at human powered flight, the Monument does a great job of sharing the history of the Wright Brothers and the long and meticulous process they went through to perfect their engineering ideas. It’s hard to conceive now, but being the first at anything is nearly impossible and the Wright Brothers not only had to perfect their theories behind flight, but they also had to build everything themselves. The one thing the site lacks though is context. The original dunes, like so many up and down the coast, were destroyed decades ago by rapacious developers and so it’s with a little imagination that we have to think about the Wright Brothers. There is a way though to bring that history to life, and it’s just a couple of miles down the road from the Wright Brothers National Monument itself. 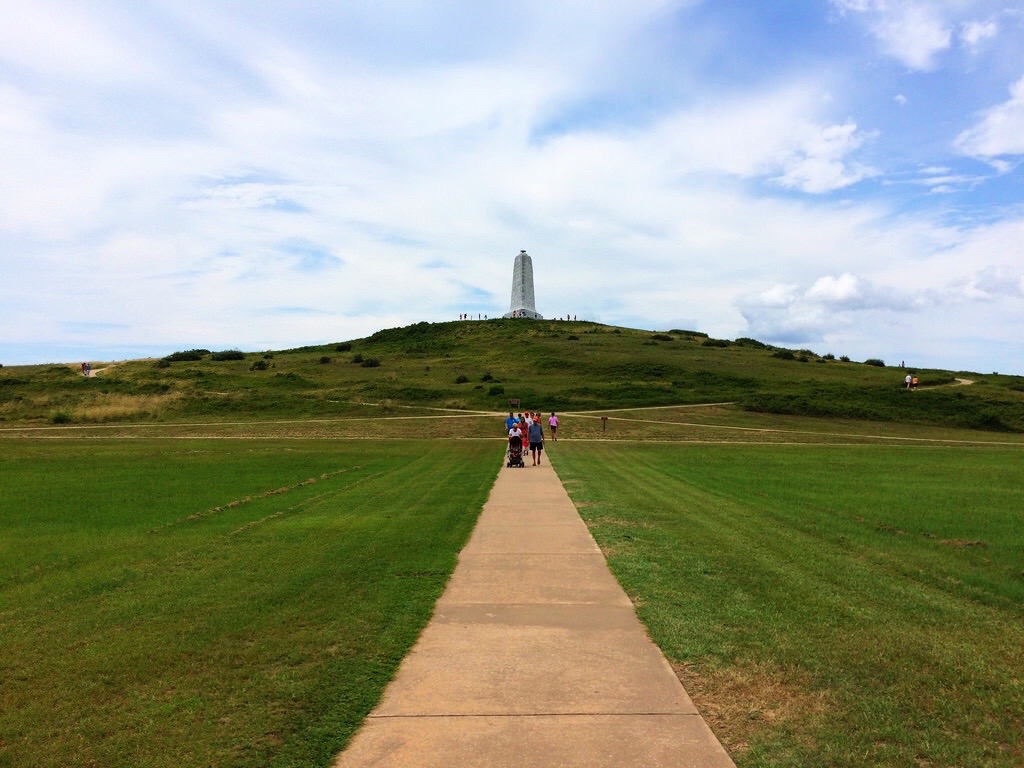 I only knew of Jockey’s Ridge State Park from my days in college when, during beach week, my friends and I would traipse up the giant sand dunes to watch the sunset and to perhaps enjoy an adult beverage or two. But now that I’m an adult, I can truly appreciate the park for the special place that it is. Covering more than 400 acres, it preserves some of the last (and highest) naturally occurring sand dunes on the East Coast. That also makes it the perfect place to recreate the Wright Brothers experience by taking a hang gliding lesson.

Oddly enough, hang gliding really hasn’t been around that long, but Kitty Hawk Kites was one of the first in the world to offer instruction in this new sport when they first started business in 1974. The Kitty Hawk Kites Flight School is the oldest hang gliding school on the East Coast and the largest school of its kind in the world. Even knowing all of this, I couldn’t help but feel a little nervous as I parked my car and walked up to their office at Jockey’s Ridge. I have a conditional fear of heights; usually I’m ok when I know I’m protected, but if I’m in control of the experience I freak out. So an observation deck at the world’s tallest building is fine, but climbing a 7-foot ladder scares the heck out of me. I’m not the first with a fear of heights though to sign up for lessons with the pros at Kitty Hawk Kites and they knew how to deal with me from the beginning. 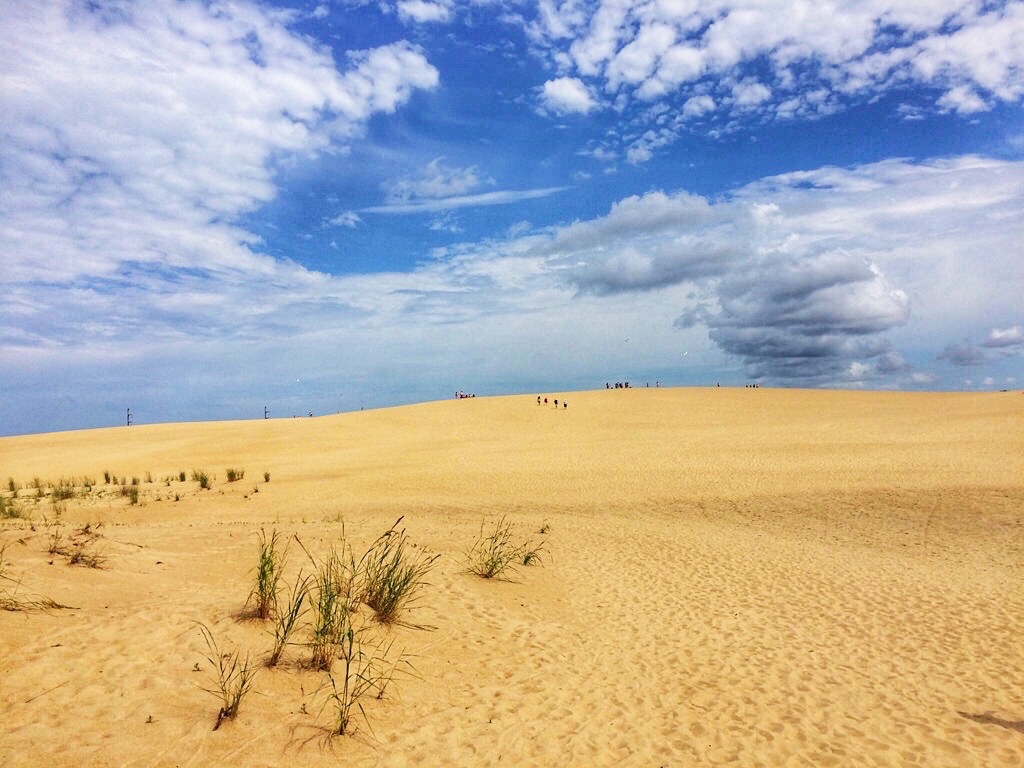 Kitty Hawk Kites offers a number of different hang gliding lessons and even offers continuing education for those who are serious about the sport. But most people are like me, first timers who just want to see what it’s all about and there’s no better place to try it for the first time than at Jockey’s Ridge. The experience starts with classroom instruction and a brief tutorial before the instructors hand out the gear and lead the group the short walk up to the sandy dunes. The dunes were hot, which shouldn’t have surprised me; they’re a desert environment after all. But I soon forgot about the heat and instead looked down from the tall dunes, then at the gliders and that twinge of fear and excitement came back instantly.

Jockey’s Ridge really is a beautiful park and should be on everyone’s to-visit list, regardless of hang gliding or not. But as I learned, there’s nothing quite like leaping off these mighty dunes with a giant wing attached to your back. And that’s essentially what a hang glider is. Kitty Hawk Kites uses what is called a Rogallo wing type of glider, named after the NASA engineer and Outer Banks resident who designed the flexible wing-type. It’s a simple design and it was that simplicity that ultimately made it popular and helped give rise to this most unusual sport. Gliders are harnessed to the glider itself so that when placed on the ground, participants hang a few inches from then ground. That part was fine, it was only when I was told to stand up that I got nervous. 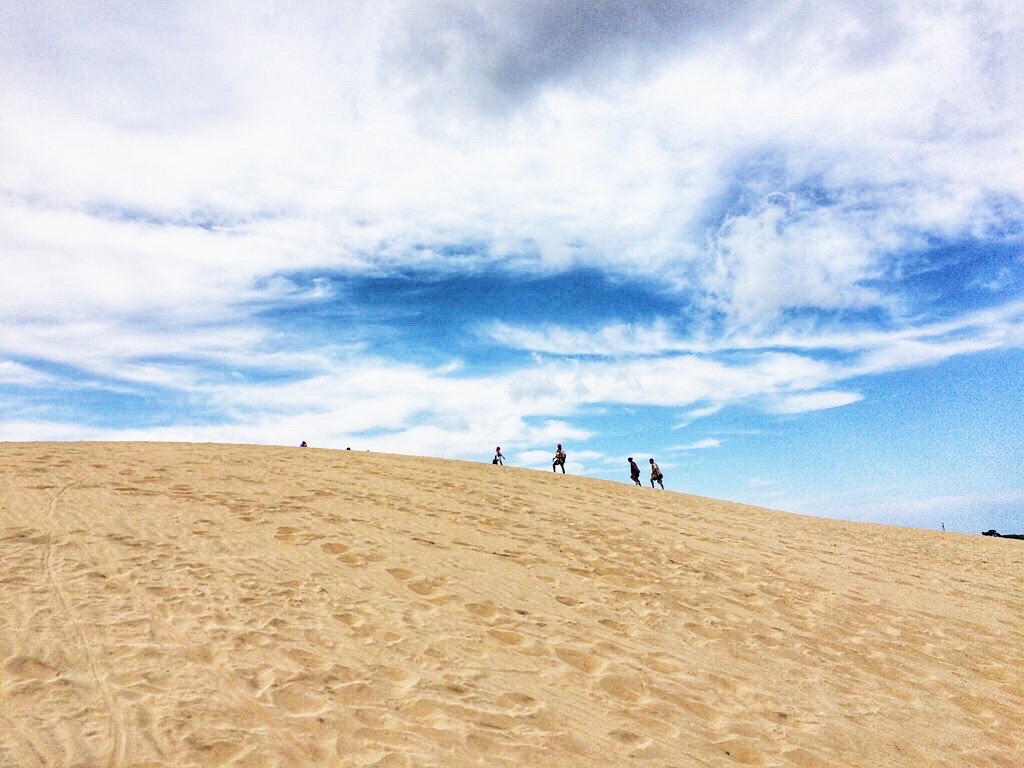 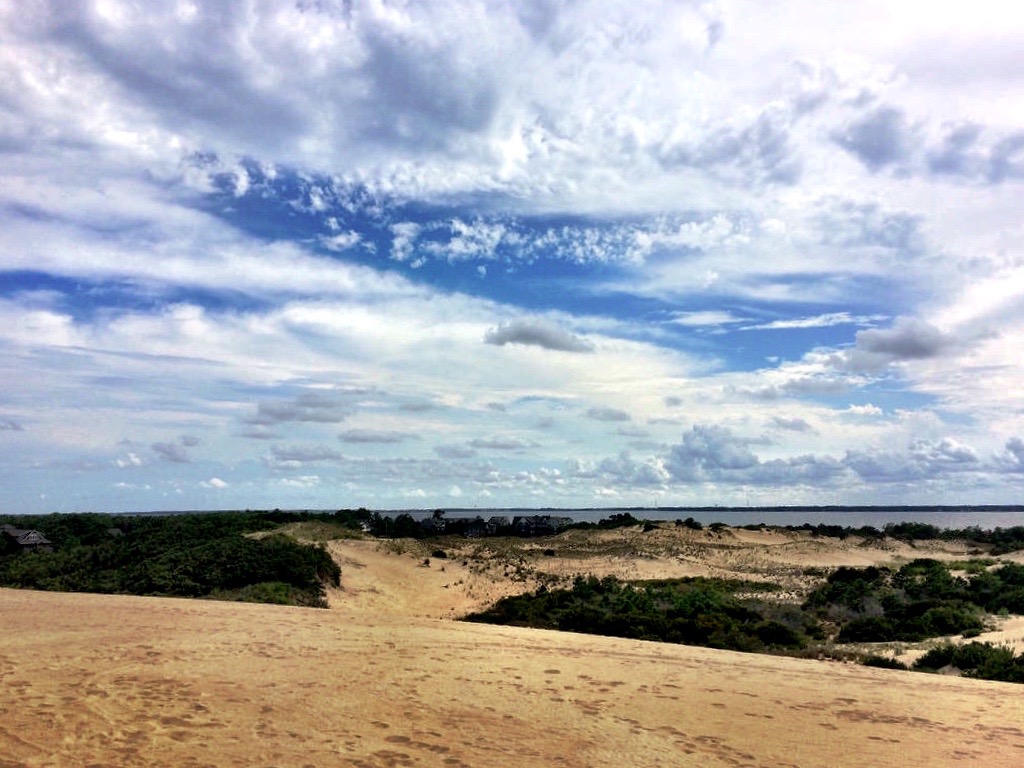 At first I didn’t want to do it. It would be easy to just leave and forget about the whole experience but, luckily, my instructor wasn’t going to let that happen. Reassuring me I followed his instructions, stood, started running and before I knew it was flying. It was all a blur, but I managed to not only take off on my first attempt but to also land without killing myself. Beginners don’t go very high, just a few feet really and using guide wires, the instructors aid in the process to make sure nothing horrible really happens. But I was in control of my flight path, both in terms of direction and height and the fact I didn’t freak out causing a crash landing still amazes me. With a beaming face the instructor congratulated me and I was euphoric. I had done it; I had conquered a fear and enjoyed an amazing time in the process. 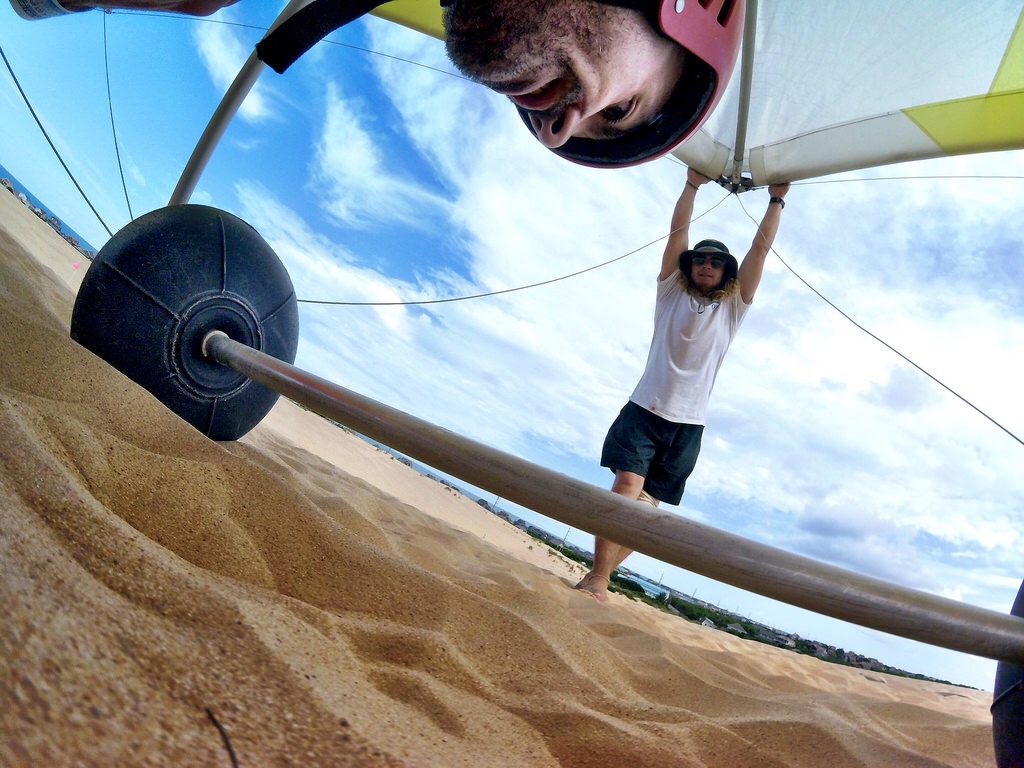 First time dune hang gliders get five chances to take off and fly and I used every one of mine to their fullest, going higher and further with each attempt. Watching my fellow gliders take off on their own flights I was impressed with how professional the folks at Kitty Hawk Kites were. Most of the instructors are younger, but that doesn’t mean they don’t love what they do and take the time to make sure everyone is enjoying themselves. It was a fantastic afternoon and was easily one of the highlights of my trip around North Carolina.

Walking back to my car I was glad I took the time to get off the beach for a while, to learn more about the important aviation history of the area and then to live it for myself. There are few places where you can follow in the footsteps of people as legendary as the Wright Brothers and it’s just one more reason to visit one of my favorite areas of the country, the Outer Banks of North Carolina.