Paradise is a concept that I’ve spent an inordinate amount of time considering. I’ve even written a post devoted to the subject, trying to figure out what it is that we collectively consider to be paradise and why. I always wonder if the ancient Romans liked a nice beach as much as we do or if when Captain Cook was making his legendary voyage around the South Pacific, he appreciated the beauty of the islands as much as we do today. It’s hard to say, but one thing is for certain, I recently had the opportunity to visit a place that is as close to paradise as any I’ve visited so far – one of the best beaches in the world, Whitehaven Beach in Queensland, Australia.

I’m not the only person who thinks this, just about every roundup you’ll find online or in travel magazines includes Whitehaven Beach somewhere on their list of the best beaches in the world. But why? What makes a beach great and what is it exactly that we imagine paradise to look like? The first thing that Whitehaven has going for it is its amazing location in the famed Whitsunday group of islands of off the central coast of Queensland. The collection is one of the most picturesque groupings of islands you’ll find anywhere in the world; small spits of land sticking up from the warm waters of the Coral Sea. Add to that their proximity to the Great Barrier Reef and it’s no wonder why this is one of the hottest tourist spots in all of Australia. An odd name, the Whitsundays were named by that now famous Capt. Cook on his explorations of the South Pacific and Australia. He sailed through this island chain on what he thought was Whitsunday, the Sunday of the feast of Whitsun or Pentecost observed 7 weeks after Easter. Like so many other place names the good captain provided, this one stuck and just adds to the mystique of the region.

While most of the small islands, inlets and beaches in the Whitsundays are spectacular; there is one that seems to rise above the rest – Whitehaven Beach. This 7-kilometer stretch along Whitsunday Island in Queensland is known for its brilliant white sand thanks to the 98% silica composition, which also means it doesn’t get too hot (great for walking) and oddly enough is good for cleaning jewelry (who knew?). It’s also what you think a tropical beach should be like. First of all, you have to really want to visit. The only way to get there is by sea or air, with air being the preferred option. That’s actually how I was first introduced to Whitehaven, on a helicopter flight to this famously private beach. 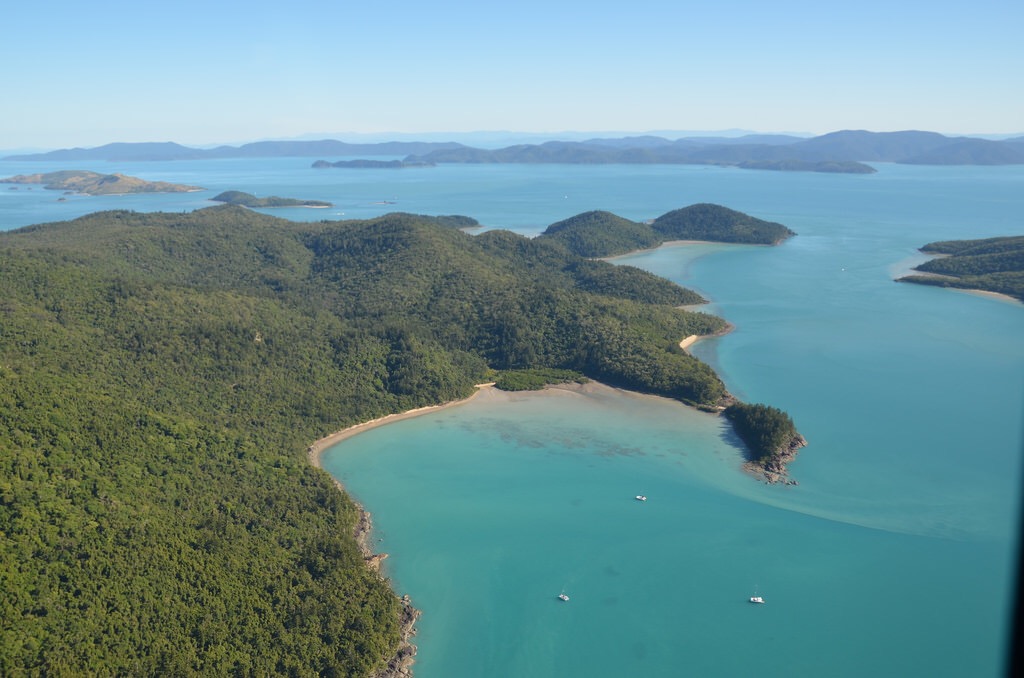 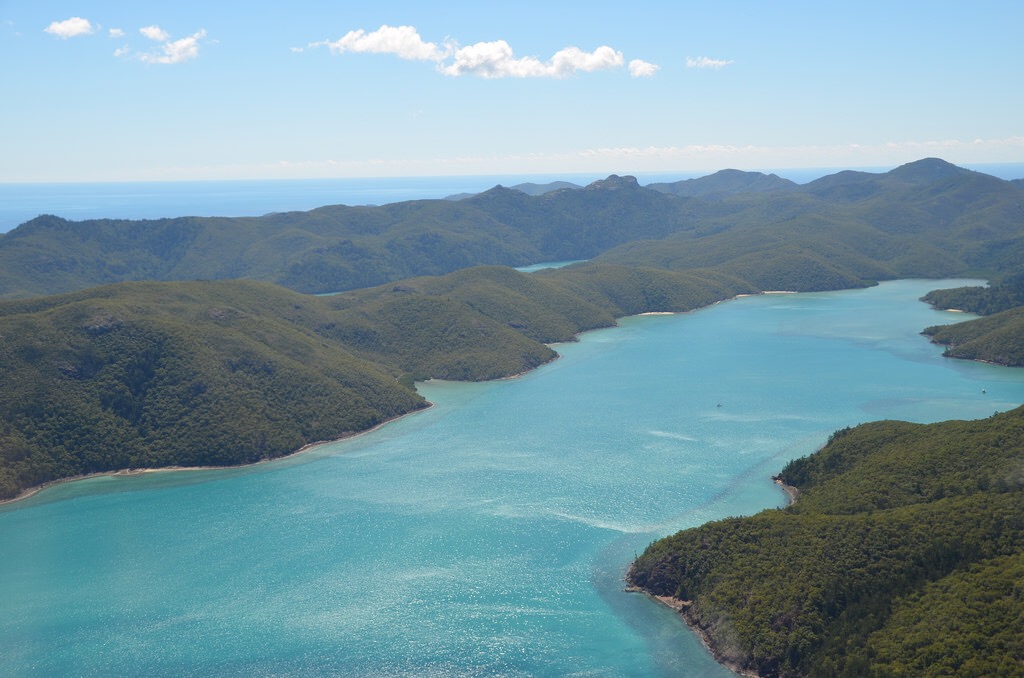 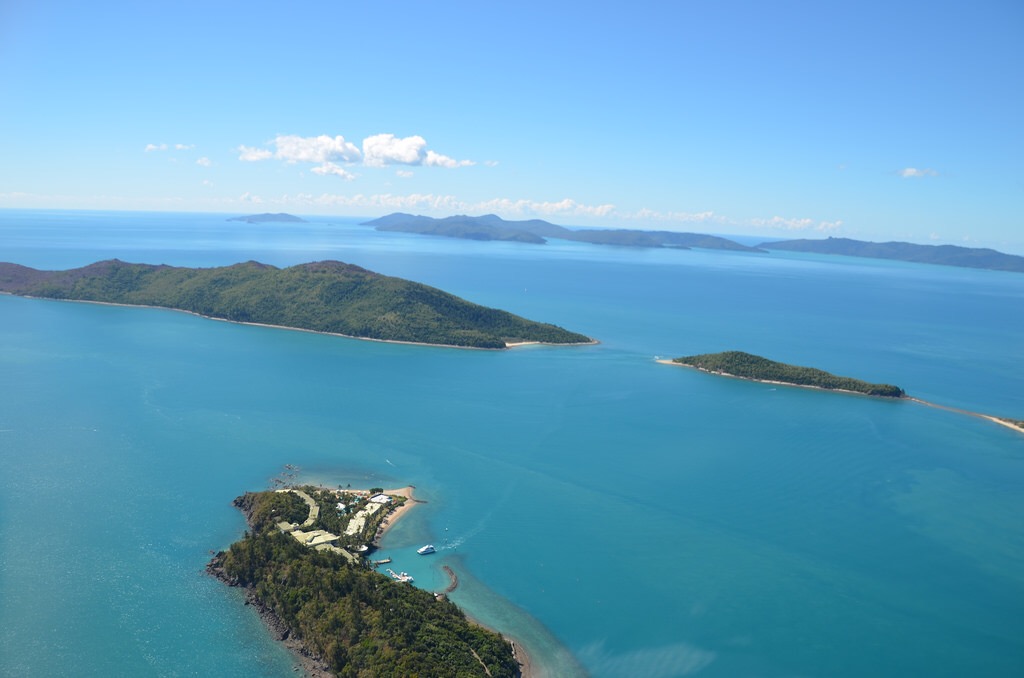 The helicopter, operated by Heli Taxi, lifted off from Airlie Beach marina, the passengers all excited for what promised to be the ride of a lifetime. Almost immediately those fantastic views came into sight, leaving the small town behind us and heading out over the small mountains, hills really, over the Coral Sea. Gazing down through the viewfinder of my camera I saw recreational boaters skimming over the perfectly calm waters, small hotels and resorts on secluded islands and then the star of the show came into view – a sight I’d waited years to see in person. Hill Inlet may not sound like much, but to name it “One of the most stunning natural formations in the world” would have been too long a name. But that’s what it is and believe it or not, the photos all shown here are practically unedited – this is honestly what this magical place looks like. That’s probably why the sudden hush came over the passengers in the helicopter, we knew it was there, we were expecting it, but the reality far outmatched any photo we may have seen in the past. As the tide shifts, the white silica sand and turquoise blue waters of the inlet blend seamlessly to create a breathtaking view of swirling waters. Hill Inlet isn’t the only part of the Whitsundays that benefits from that oh-so-fine sand; it’s also a big reason why Whitehaven Beach is so very special. 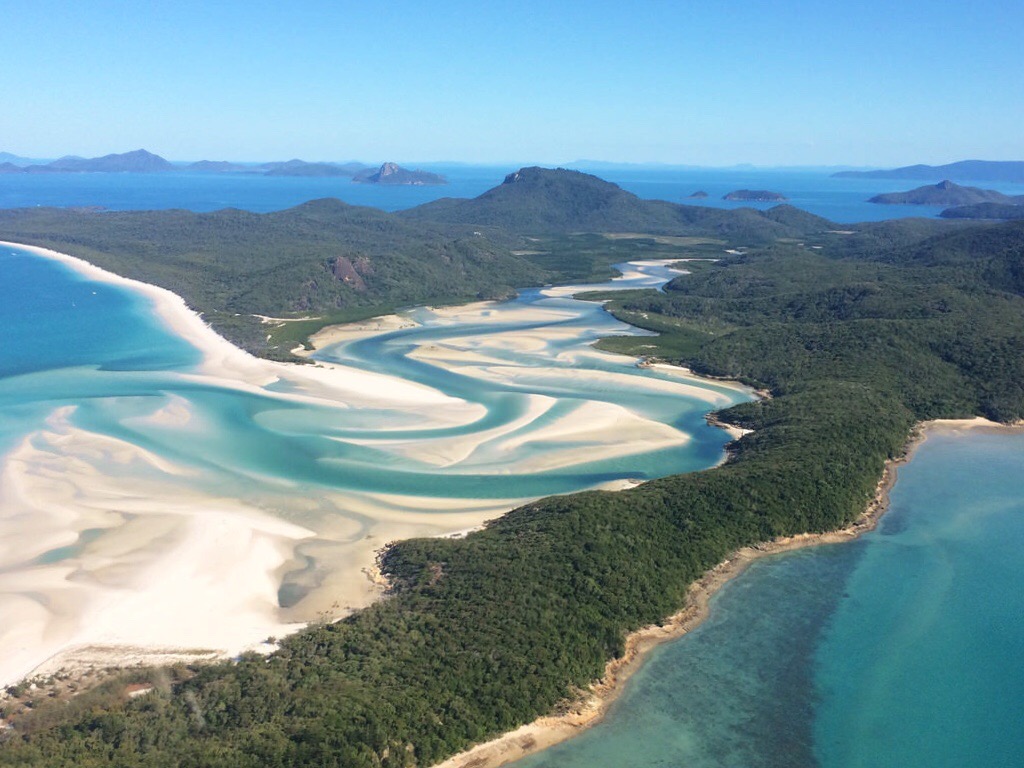 Flying over Hill Inlet and the crystal blue waters of the Coral Sea, the helicopter landed gingerly on the broad beach of Whitehaven. There was a catamaran anchored off the coast but other than that, no one was there. Seven miles of beach and there were only 4 of us on it. That’s a big reason why Whitehaven is so often ranked as one of the best beaches in the world. No hotels, restaurants, cafes, shops or anything else that smacks of civilization can be found there. It’s just the jungle, the amazing sugary sand beach and the near-perfect water, the only intrusion the sound of the water as the waves lap onshore. It’s what every beach should be, but so few are. Commercialization doesn’t exist here; it’s just the raw and powerful beauty of Mother Nature at her very best.

I was a little embarrassed; everyone else was much better prepared than I was. I had a packed lunch, but it was light and thanks to that aforementioned lack of shops and cafes, I was there on the beach for a few hours without a lot to snack on and nothing to drink. Luckily the pilot of the helicopter, who arguably has the best job in the world, came to the rescue and presented me with a surprise packed picnic for my beachside relaxation. The flight is much more than a simple visit to Whitehaven, once safely on the beach guests spend a couple of hours enjoying the almost-always-perfect weather, taking a dip in the warm ocean waters and just enjoying being at one of the most beautiful places on the planet. 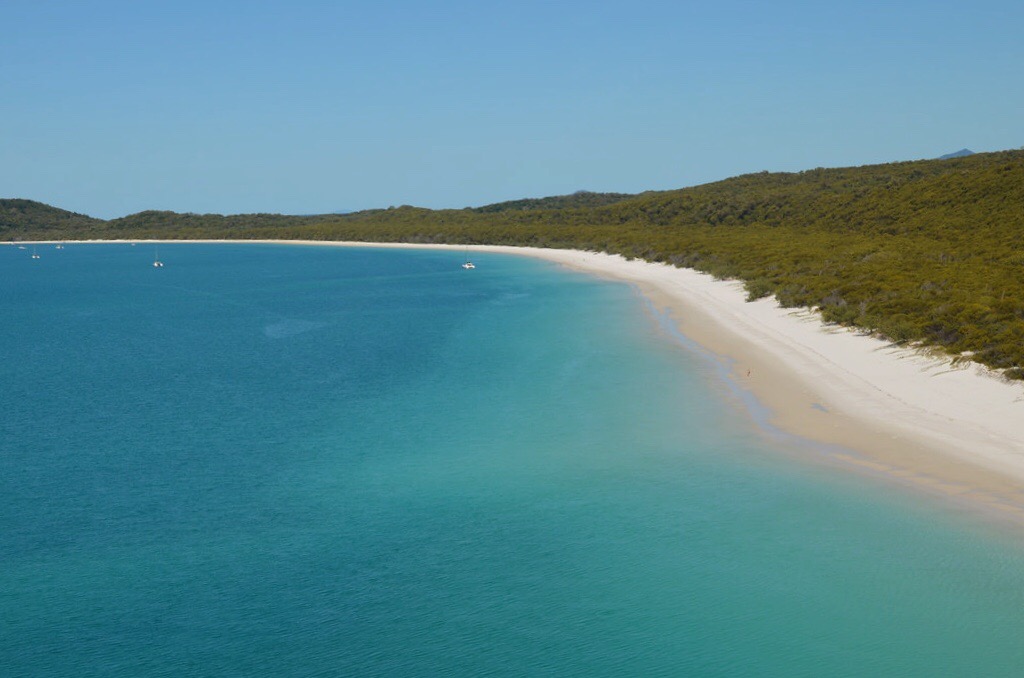 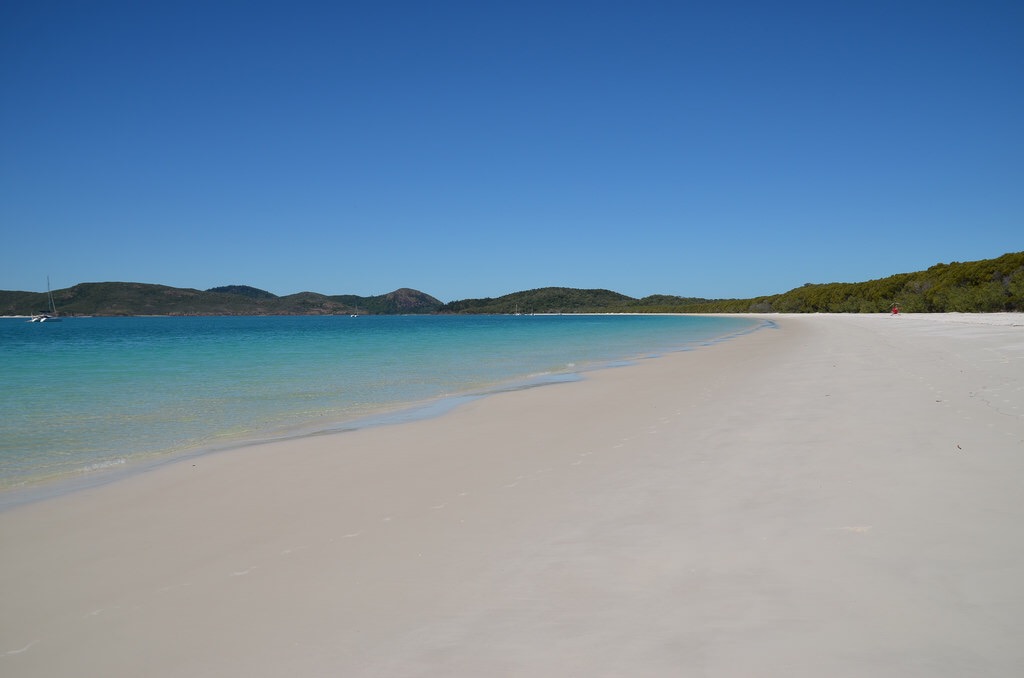 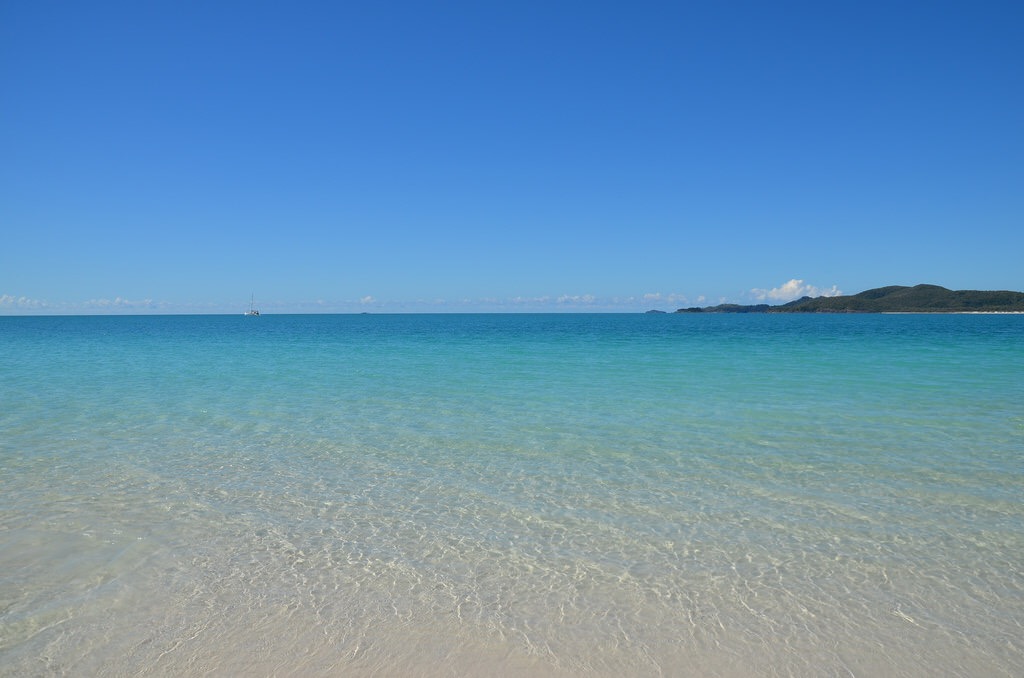 I’ve never been much of a beach person, I get bored too easily, and yet I always seem drawn to the water. This time I decided to go into the experience with a different mindset. Instead of looking for things to do, there isn’t any, I made the conscious decision to enjoy just being in the moment. About half of you will scratch your heads after reading this, but the other half will probably understand where I’m coming from. I just can’t sit still, even when I’m supposed to be relaxing, which is why I usually don’t spend a lot of time hanging out on beaches. After ten minutes I get bored and look for something, anything, to do. On Whitehaven though I leaned back, enjoyed the cured meats and cheeses in my impromptu picnic basket, and just sat there, gazing across the perfectly clear waters of the sea around me and not for the first time, pinching myself repeatedly. I took a dip in the water, walked around a bit exploring, but most of the time I did very little; oddly content to enjoy my time on what is nearly universally agreed to as being one of the most beautiful spots on our not so humble planet.

Eventually the pilot roused himself out of his hammock, tough life as I said, gathered us up and off we went again, taking a different route over the Whitsundays to see even more beautiful angles to the area, before depositing us safely back at the marina in Airlie Beach.

Helicopter experiences can often be seen as an extravagance, perhaps an unnecessarily expense on a trip and I understand that. But there are some places around the world where you just have to splurge a little for amazing experiences and flying over the Whitsundays is definitely one of them. We travel to see, to experience and to be awed, and that means planning for experiences that will define a travel experience for us. Soaring high above the islands off of Airlie Beach in Queensland is so special and so very unique, that this isn’t only a nice luxury, I think it should be a key part of any trip to the area.