I’ve always had a profound feeling of wanderlust, and as a kid this manifested itself through self-education. I read anything I could about foreign countries and cultures and those early explorers who truly discovered a new world, including Captain James Cook. He especially interested me, probably because his journey through the North and South Pacific and then on to New Zealand and Australia are the stuff of dreams – mine at least. The funny thing about explorers, their legacies aren’t usually felt today and if they are, it’s typically just in passing. Not so in Australia and not so with Cook, whose presence is still keenly felt especially in the area of Tropical North Queensland known as Cape Tribulation.

Cook himself labeled Cape Tribulation, so-named after his ship struck a reef and ran aground, eventually forcing him to spend several months in modern-day Cooktown repairing his ship, The Endeavour. This lush but dense rainforest must have seemed like the end of the world to Cook and his men, but more than 240 years later not much has changed to be honest. Cape Tribulation is still a remote spot, but one well worth the effort to explore. 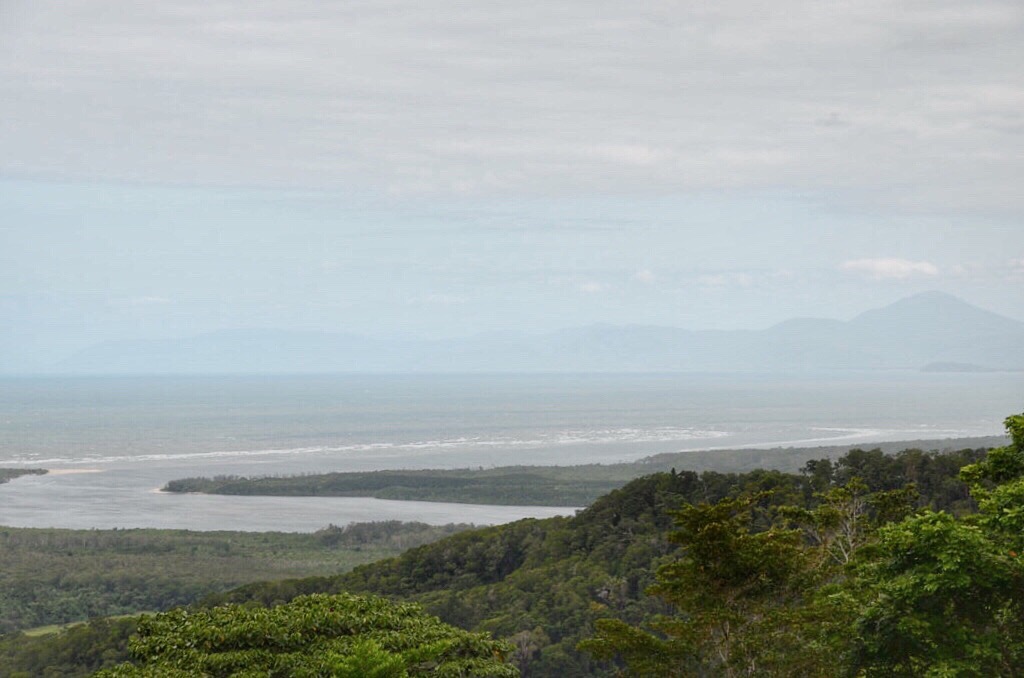 Located about 60 miles north of Mossman, the closest town along the main highway, Cape Tribulation wasn’t necessarily all that difficult to reach. There’s no direct road per se though, instead the Daintree River Ferry must be used to access this national park and World Heritage Site. Actually, it’s the site of two World Heritage designations– Cape Tribulation is where both the Great Barrier Reef and the Wet Tropics meet, creating one of the most unique natural experiences in the world. That’s not what I was thinking about though as I drove along the twisty roads leading deeper into the heart of the Cape. No, instead I was almost entirely fixated on the signs I passed along the way. Placards next to creeks warned of crocodiles and every few miles an unusual sign popped up, warning that cassowaries roamed these forests. 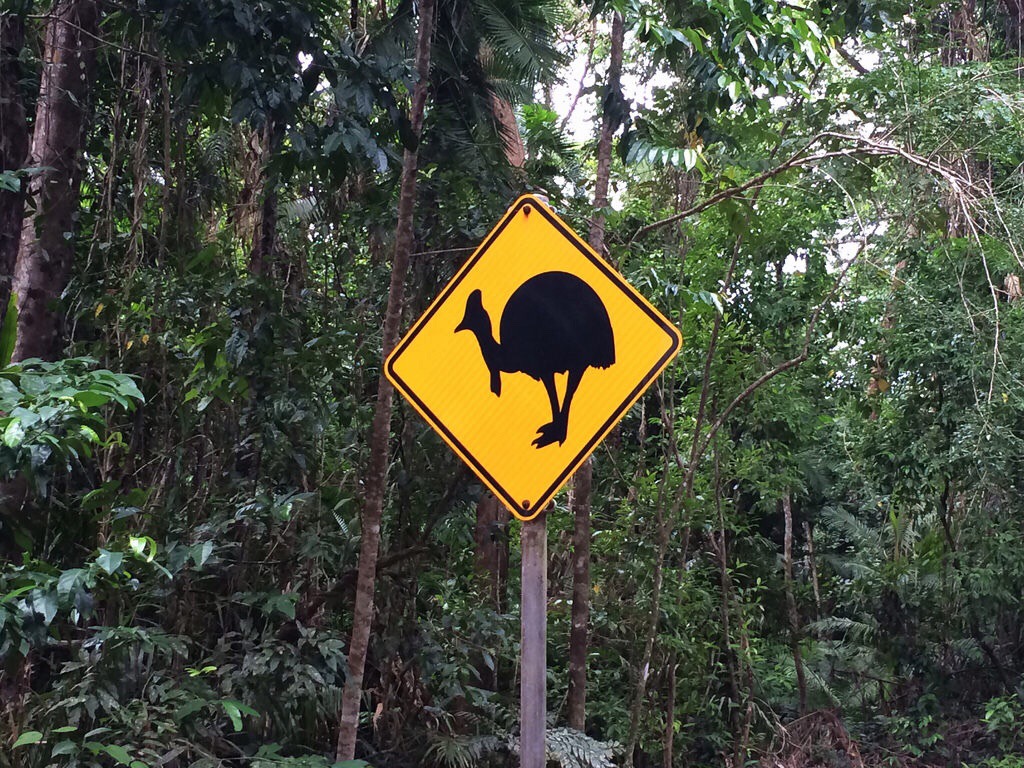 Most people outside of Australia probably haven’t heard of the cassowary, this odd-looking bird seems like it should be in Jurassic Park instead of the Daintree Rainforest. One of the largest birds on earth, the cassowary is also one of the most dangerous, its sharp talons able to inflict serious injury to any threat. But the negative aspects of this shy, solitary bird get too much attention and due to that, and predators like dogs, this important bird is now highly endangered. The cassowary is important because of its role in spreading seeds throughout the forest, which has been an important keystone in the development of the world heritage rainforests of Queensland for millennia. With that in mind, I didn’t want to hit one driving along those narrow roads – just imagine the headlines. I also never expected to actually see one. There are only around 1800 or so in the wild, and they hide in the deep forest, away from everything else. That’s why I was surprised when, along the side of the road, I saw it. The signature blue and red colors of the neck and head stood out and I saw a massive bird, much larger than in the sanctuaries, as it walked along the side of the road before disappearing again into the forest. It all happened so fast I could barely believe it, but it was the perfect introduction to Cape Tribulation. A wild place where anything is possible. 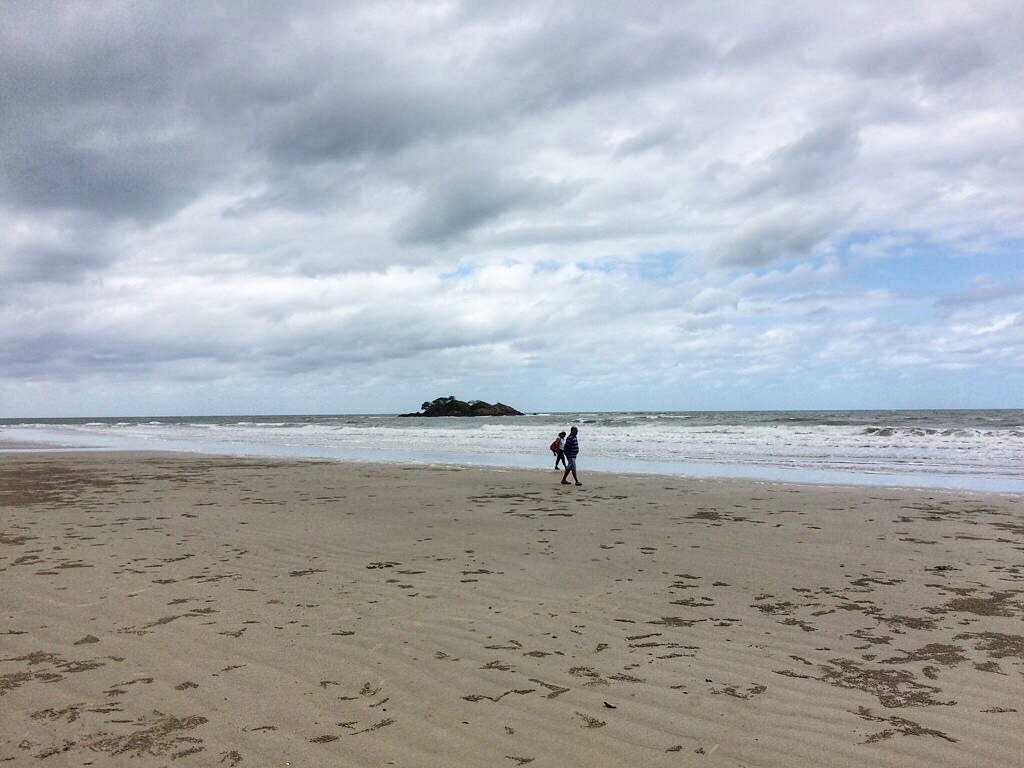 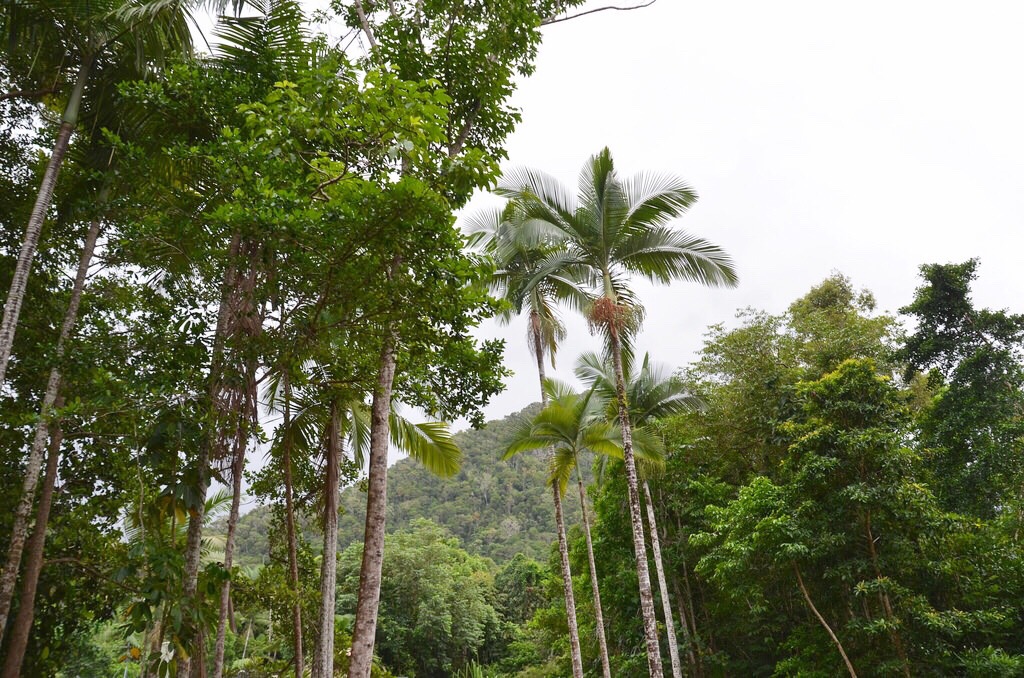 How wild is Cape Tribulation? Very. It’s almost entirely made up of very dense rainforest, the Daintree Rainforest which is part of the aforementioned World Heritage Site. It’s listed by UNESCO for several reasons, not the least of which is its incredible age. Daintree originally formed around 140 million years or so ago when Gondwana, the massive single continent, covered the earth. Think about that for a second, this forest was around before there were continents. That’s an incredible period of time, and to wander through them today is one of the most amazing, and perhaps underrated, experiences in the world. It’s not just the beauty of the plant life you find, it’s the type of flora that’s amazing. Plants that only exist in fossils still grow proudly today in Daintree. Protoferns that once fed the dinosaurs carry on in Daintree as if nothing ever happened. It’s a time capsule not just to another age, but another planet. That’s probably why not many people live there.

Around 300 or so folks call Cape Tribulation home, dealing with life completely off the grid. There isn’t running water, sewer or an electrical grid. If you want it, it has to be powered by generator and life frankly isn’t easy. But someone has to cater to the thousands of people who ford the river every year, to see for themselves what makes this small, remote area so very special. One of the best ways to experience the wild forests of Tribulation though is to throw yourself into them, and the best way to do that is through a pretty unique zip line experience. 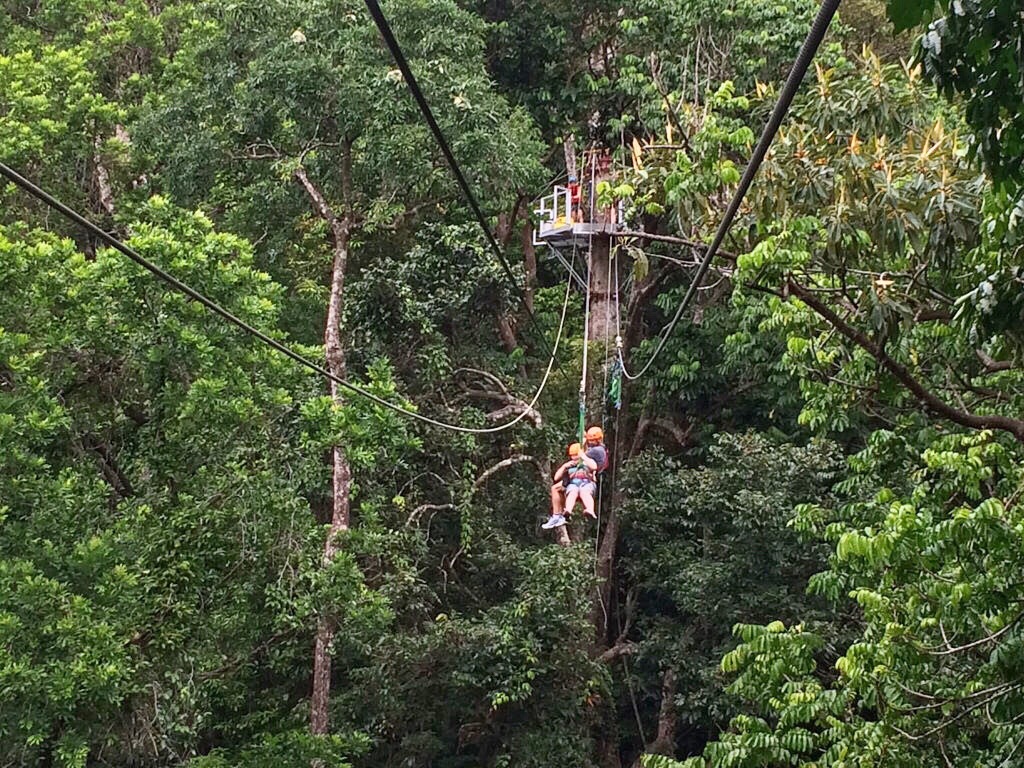 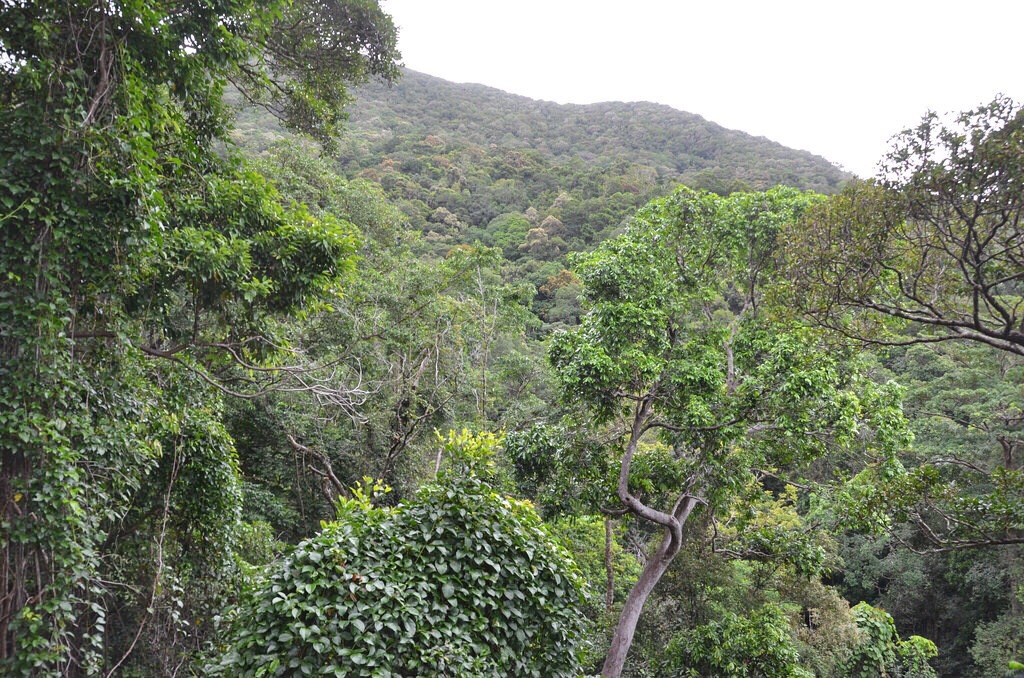 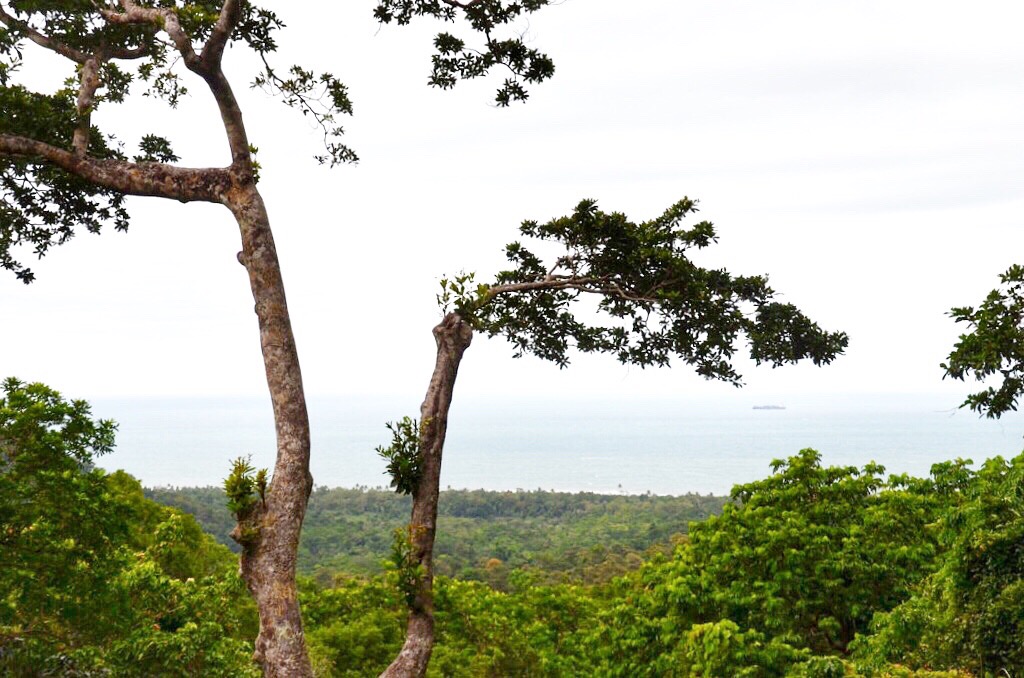 There are thousands of zip line facilities around the world, but none are like the Jungle Surfing Canopy tour through the heart of the Daintree Rainforest on Cape Tribulation. It took the founder years of research and permissions before he was allowed to build in this UNESCO protected area, which he did without using any heavy machinery or even a nail. Today there are 6 platforms allowing participants to zoom through the trees, all materials originally carried into the forest by hand and the systems use an ingenious friction system to keep it all running. That means that this thrill-ride through the jungle is an eco-friendly one, an experience that hasn’t harmed the native habitat but does allow visitors the very unique opportunity to see one of the most beautiful landscapes on earth from high above.

I’ve done a lot of zip lines around the world, but in all honesty the level of professionalism at Jungle Surfing was amongst the best I’ve ever seen. The guides took great care in ensuring a fun and safe time, expertly assuaging the fears of newbie zip liners and return customers alike. It was also a whole lot of fun. The lines vary from beginner speeds, to high paced flying all amidst the trees and plants of Daintree. There’s not a whole lot to do on Cape Tribulation, but this should absolutely be on everyone’s must-do list when they do finally visit. 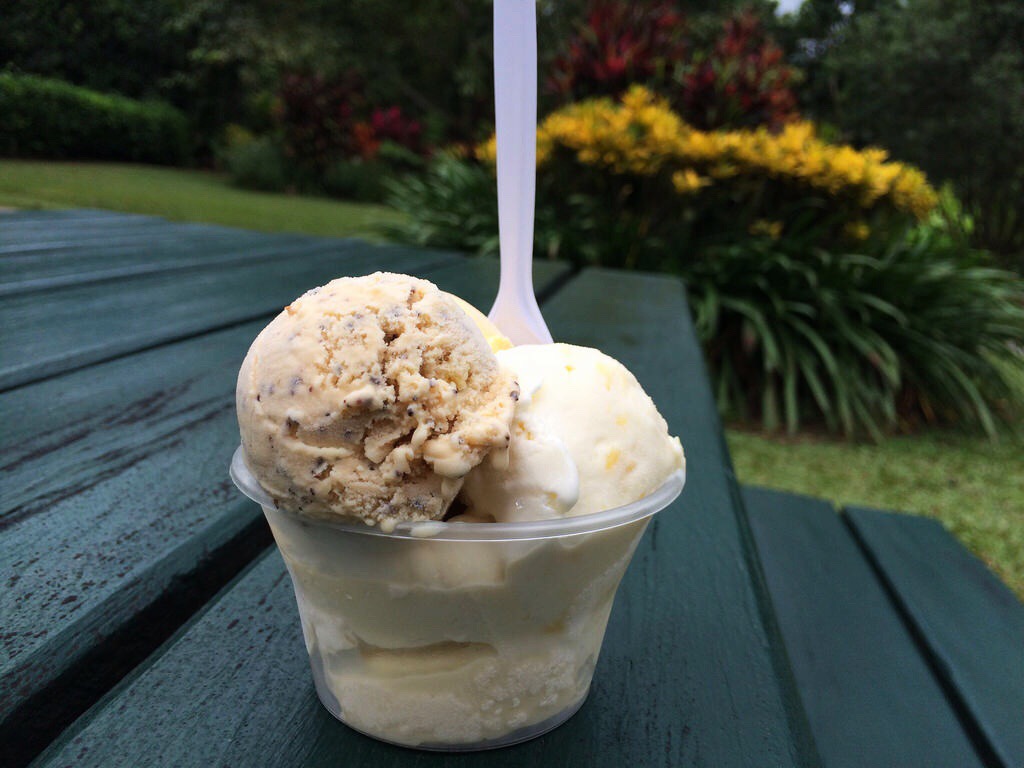 Another experience to add to that list is a stop at the Daintree Ice Cream Company. While not typically known for their culinary prowess, Australians do love their sweets and the unique flavors of the homemade ice cream here were some of the best I’ve ever sampled. The ice cream is all made on site from tropical fruits grown on the property. That means that the flavors change by season, and there are usually only 4 of them on offer. When I visited the flavors included: pineapple, mango, soursop and wattleseed. A little unusual, so I went with the sampler cup to try them all. The ice cream was rich and creamy and as it turns out the soursop was my favorite. It was a fun way to cap off an amazing day exploring this lush, tropical area and to cool off in the always hot and humid weather.

Aside from a few tours and trips out to the Great Barrier Reef, there are also a couple of hotels and hostels on the Cape and a handful of places to eat. But that’s it. This is still a wilderness area, with most people driving up for the day either from Port Douglas or Cairns to see for themselves what untouched, natural splendor really looks like. It’s an all-day trip no matter where you come from, the roads on Cape Tribulation are sealed but winding, meaning that driving around it can take some time. But to stand where Cook stood and to see the jungle as it has stood for millions of years is a unique experience, one that can only happen on Cape Tribulation in Queensland.