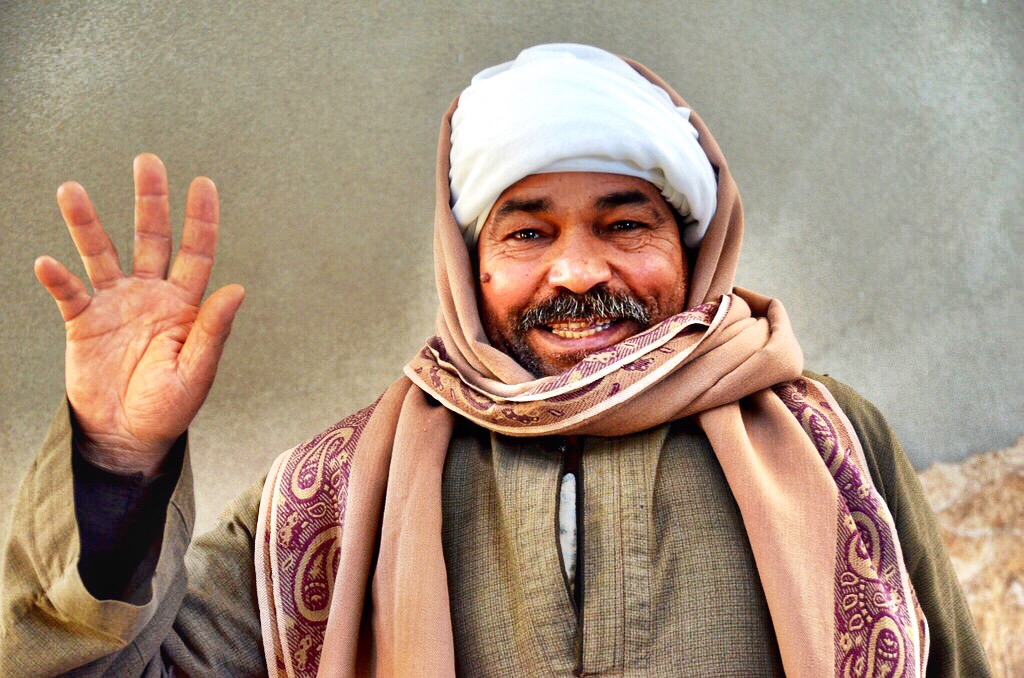 No matter where I go or stunning and impressive sights I see I’m always struck by one singular fact – that travel is all about the people you meet along the way. People define the travel experience whether we realize it or not, and it’s through them that we truly get to know a place and its culture. Egypt was no exception and instead of being dwarfed by monuments like the Great Pyramids of King Tut, the people of Egypt seem to rise above all of it, their personalities and unique points of view commingling to make the travel experience in Egypt unlike any other. To show this more personal side of Egypt I thought I’d share a few people who I met along the way that made my own travels through the country so very special. Every face tells a story, and it’s our job to figure out what they’re trying to say.

I met a lot of Muhammads in Egypt – it’s naturally a common name. At one point my guide, driver and fix-it guy were all named Muhammad; efficient but simultaneously confusing. I met this happy gentleman, also named Muhammad, while at one of the many sites and temples around the country. Hawkers have probably always been a part of traveling to Egypt. People, usually men, who crowd around and even inside the popular tourist sites, selling everything from bookmarks to statues of old Egyptian deities and everything in between. While at times annoying, they are just trying to earn a living and so I usually just politely ignored them, not needing anything to take home. There’s also another type of hawker, a person who sells his very image. They know that tourists want pictures of ‘locals’ and so they stand amongst the pillars and archways of ancient monuments, waiting for tourists who want to capture them on film. I typically ignored these folks too, until near the end of the trip when I met Muhammad. Looking into his twinkling eyes I saw something different from all the others – he seemed to be happy. Times have been very, very hard in Egypt for men like him in recent years, and in large part that has led to a certain level of quiet anger, especially amongst the usually-ignored hawkers. Not so with Muhammad, but that’s not why I paid him so I could take his photo. I thought his face told a story, a story of calmness and dignity. A story of joy even in the hardest of times and with that face comes a lesson, a lesson about maintaining our own sense of self no matter where we find ourselves in life. Plus he was just a really nice guy, and I didn’t want to walk away without helping him in out in some small way. 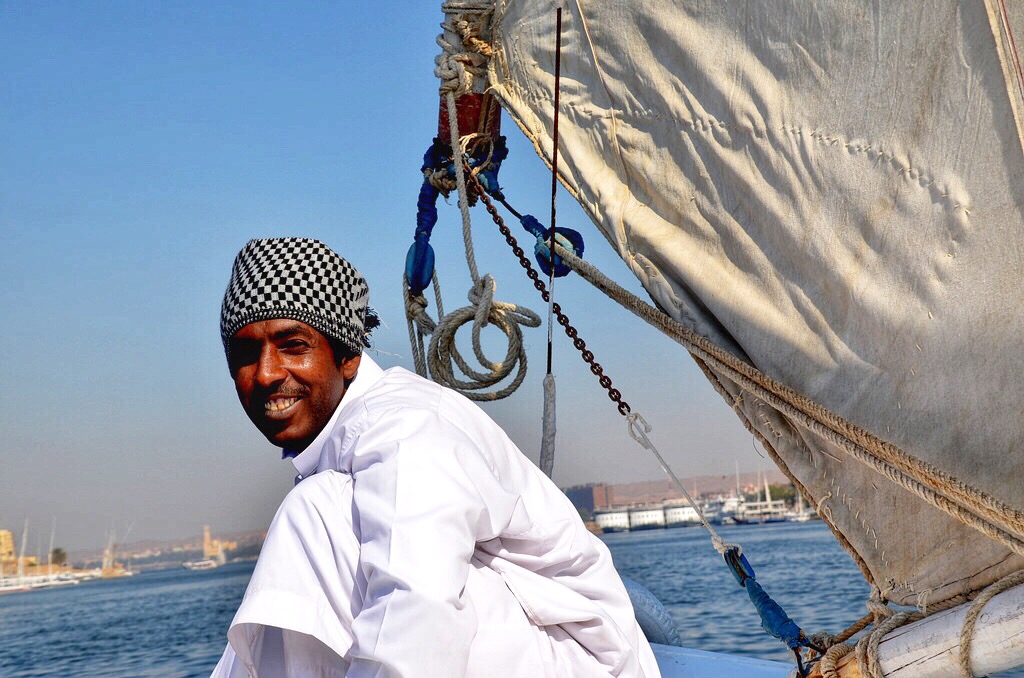 I think it’s impossible to be on a boat and not smile. There’s just something about being on the water that makes me happy. Obviously I’m not alone in that feeling, as I learned when I jumped on this man’s felucca boat for a spin on the Nile near Aswan. A felucca is a traditional wooden boat with huge, sweeping sails and a distinctive look that has been used along the Nile for generations. As soon as I got onboard I felt my cares melt away, the hustle and bustle of Aswan while still in sight, had vanished. In its place was the calm serenity of the river, with boats of all sizes sailing up and down her. Within seconds a young boy on what was essentially just a piece of wood paddled over to us, trying to catch up until he finally managed to latch on. Before I knew what was happening he started to sing “Frere Jacques” in French. It was an entirely new way of trying to earn a few pennies from anything else I’d seen before, and he was so earnest and worked so hard I had to reach into my pocket for a few coins to give him. The boat though picked up speed and the boy left, leaving us in the capable hands of the skipper who sailed through the waters with ease and true pleasure. While a little on the chilly side, it was a bright sunny day and seeing Aswan from a different point of view only made me love the area that much more. I’ve always believed that it’s important to see places from as many different viewpoints as possible, and one of the best is without a doubt from the water. 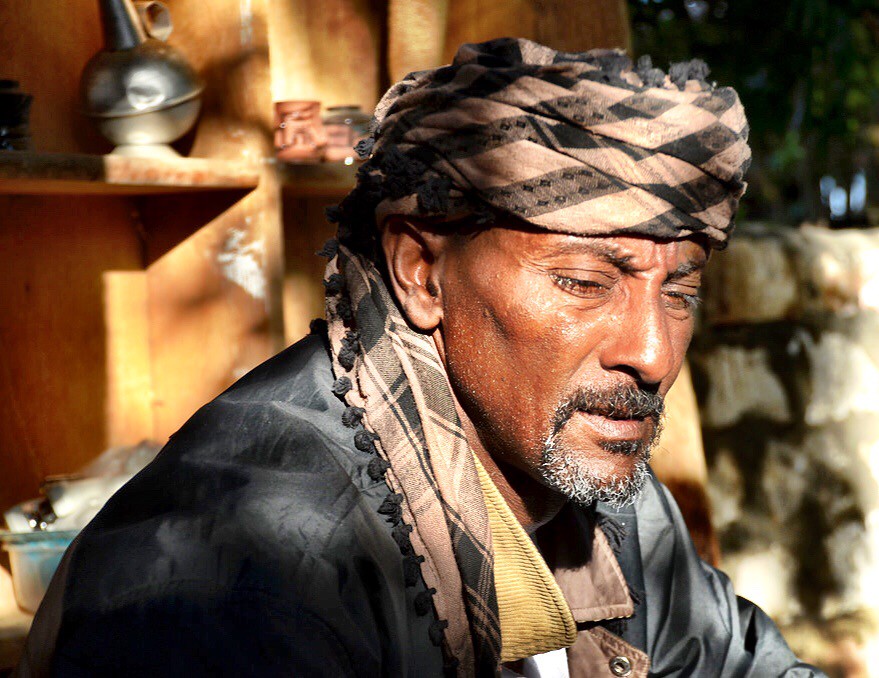 I didn’t know anything I’m sorry to say about Nubian culture before my trip to Egypt; and I imagine I’m not alone in that ignorance. The Nubian people have called the lands of southern Egypt home since long before there was a modern Egypt. Originally from Sudan, they speak a different language, enjoy a different culture and even look different from the Egyptians around them. As a minority they also have a very long history of being oppressed, both benignly and actively. Their recent injuries came from the building of the Aswan High Dam in the 1960s and 70s, when entire riverside Nubian villages were swept away by the rush of the waters. Relocated by the government, they lost their centuries old connection with the land and as such, have been a people in flux for a long time. Also for many years, it was common for some in the community to make money by working in the tourism industry. Day trips to explore ‘typical Nubian villages’ were and are offered, an attempt to introduce visitors to this often overlooked culture. I joined one such group and while at first it had the look and feel of something fabricated, a touristy experience only, I tried to quickly look beyond that and to see the sadness on the faces of the people I met. I say sadness not in a derogatory or colonial way; it’s just a fact. The people I met in these villages were not happy and some even bordered on angry; and frankly they have every right. Not only are they still angry with the Egyptian government for a variety of injustices over the years, the loss of tourism in recent years has been perhaps most devastating to them. They never made a lot of money from tourists, but even that meager amount has dried up leaving a void with nothing to occupy its space. The first gentleman I met though was just that, a gentleman in every sense of the word. His job was to show us how to make the rich and robust coffee the Nubians are famous for, Moka. The coffee was indeed strong and tasted ok, but it was the experience that meant the most to me, a sharing of ideas and as I peppered him with questions he very good-naturedly answered them all. In another village further down the river, the experience was far different. Hardly anyone ever visited them and as such the hawkers were what I call “aggressively persistent.” Seeking refuge in shops and homes, I counted down the seconds until I was scheduled to leave. I feel bad saying that even now, I know they’re all just desperate for cash, but unlike making coffee, I never felt like there was a sharing of cultures, no, instead it was obvious they only wanted to swap their knick-knacks for what was in my pocket, a sad but pervasive phenomenon. 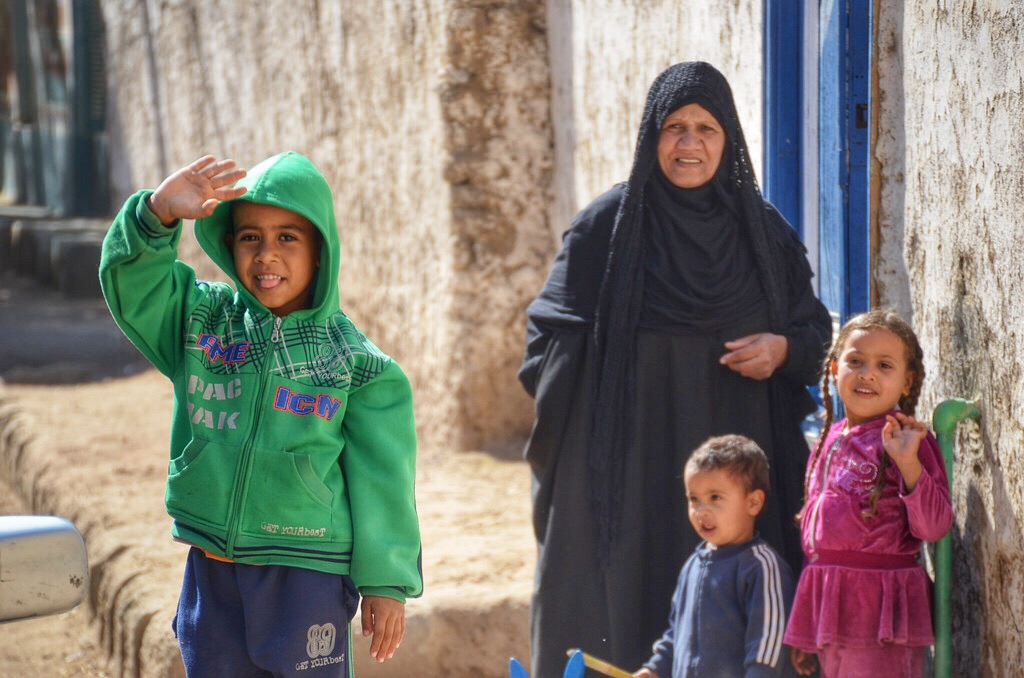 Anywhere I go in the world I’m amazed at the spirit of children. I believe that kids around the world are all basically the same; no matter what their lives are like or what particular hardships they may have to deal with. The same was naturally true in Egypt and I met many on my journey around the country, including these cuties with their family in a small town not far from Luxor. We were walking down a country road just exploring the area when I passed by a house. In front were these kids playing with their mom and aunts, enjoying a quiet afternoon more than anything else. We stopped and chatted through a made up sign language, but like most kids I’ve met they were fiercely interested in my camera. I took some photos and then showed them to the children, always delighted by seeing themselves on the screen. It was a simple and brief moment, but a joyful one for all involved I believe.

I love this shot and while it combines a couple of other moments, I thought I’d share it. There are hawkers in Egypt and there are plenty of opportunities to be on the water, but these two guys found a way to combine them both into one oddly fun experience. A cruise down the Nile is a very common way to experience some of Egypt’s most famous cities and sights, and for me it was the best few days of the trip. One afternoon I went up to the top deck and found these entrepreneurs. Pulling up alongside the ship, they tied themselves to a rail and started yelling to get our attention. They were selling all kinds of things, mostly towels and galibayas – traditional Egyptian clothes. The process was a simple one; they showed their goods from the boat, if you liked something they threw it up in a plastic bag. If, after further inspection you liked it, you haggled down to the water, hopefully finally agreeing on a price. Another bag was thrown up into which you put the money and the transaction was completed. It was fun, entertaining and everyone went away satisfied. A much better way of doing business than hassling, at least in my opinion.

These are just a few of the many wonderful people I met in Egypt. As usual, it was the people more than temples and museums that defined the experience for me, that personalized it in a way nothing else can do. It’s hard not to like a country and its people once you visit and that is thanks entirely to the people who live there, who unknowingly act as citizen ambassadors and who make the dusty contents of guidebooks scream to life.