I sometimes worry that the essence of the places I visit aren’t always well described when I finally conjure up those posts from the ether of my mind. Photos help of course to tell that story, but they can’t do it alone. Only when paired with prose imbued with a deeper understanding can they work together in unison and start, just start mind you, to help people feel what makes certain cities and countries so very special. On my recent trip to New Orleans I tried a little story telling experiment. I have lately become a little obsessed with Instagram as the best way to share my travel experiences, but I decided this trip to tackle that reporting in a more thoughtful way. Instead of spewing out photos of every little thing I saw and did, and every beignet consumed, I purposefully kept the photos to a minimum and instead made sure that they were powerful images, ones that helped tell the real New Orleans story and more importantly share with the world how I personally experienced it. I’ve been really pleased with the results and based on the comments I think that others have been too. In case you aren’t following me on Instagram (Shame on you!) I thought I’d share some of my favorite photos from the New Orleans trip and provide just a peek into what it’s like to travel in one of the most unique cities not only in the US but most certainly the world.

There are some cities and even regions around the world where food isn’t just a necessity; it’s a way of life. New Orleans is one of those special cities where people truly live to eat instead of just eat to live. Having visited before I knew that, but had forgotten just how important food culture is to the people who live there. Chatting with locals they said the lifestyle just lends itself to great food and drink and no one judges you if you decide to partake a little too much of either. To experience New Orleans is to eat your way through it, both in the city’s famous dishes and its newer brand of culinary experimentation. 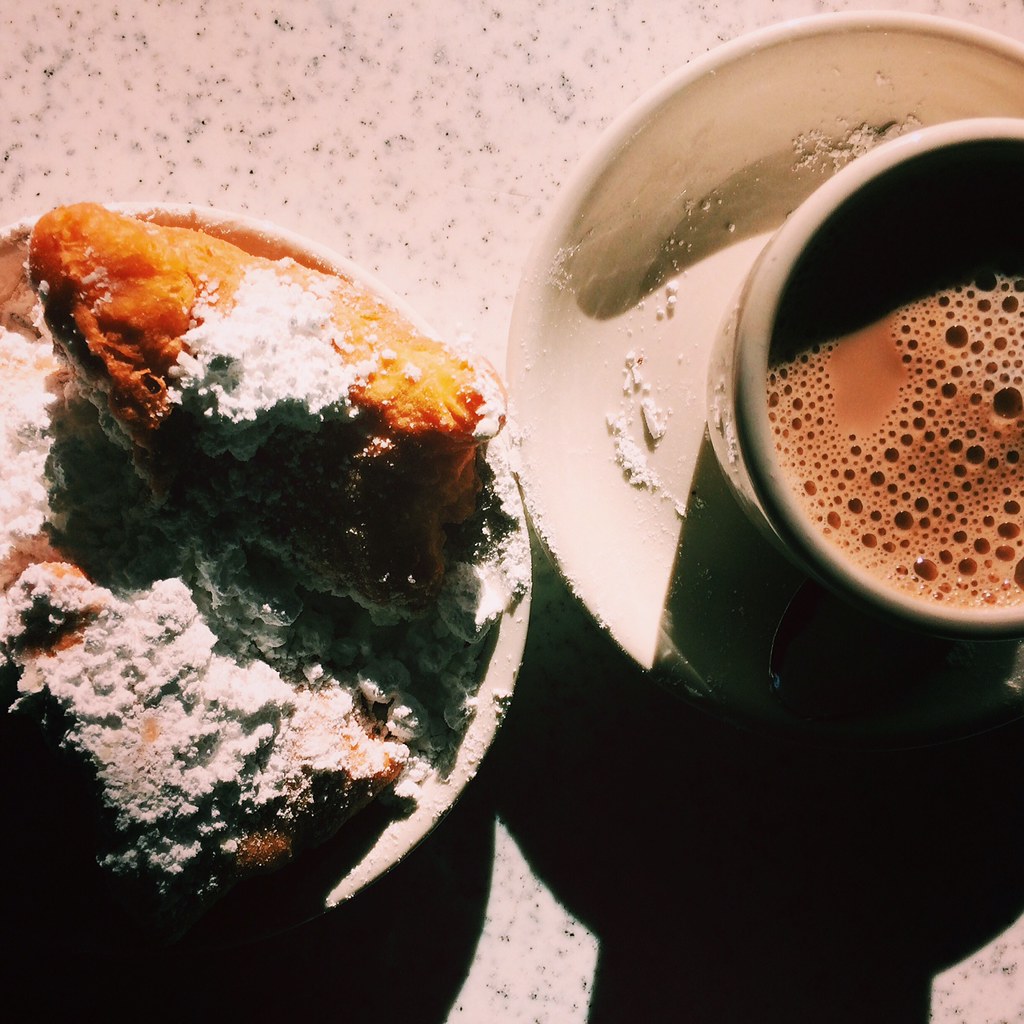 My first morning in town I performed a ritual undertaken by millions before me, breakfast at the Café du Monde. This traditional coffee shop opened its doors back in 1862 and little has changed since then. The menu is as simple as it gets and is unlikely to change anytime soon: coffee, beignets, white and chocolate milk, and fresh squeezed orange juice. That’s all there is, but no one around me seemed to be complaining. The coffee may be different than what you’re used to though, it’s made with chicory. It’s a testament to the French influence in the region and adds a deeper almost chocolate taste to the coffee. But when eaten along with the delicious square pieces of fried dough known as beignets, there’s little else better in the world. 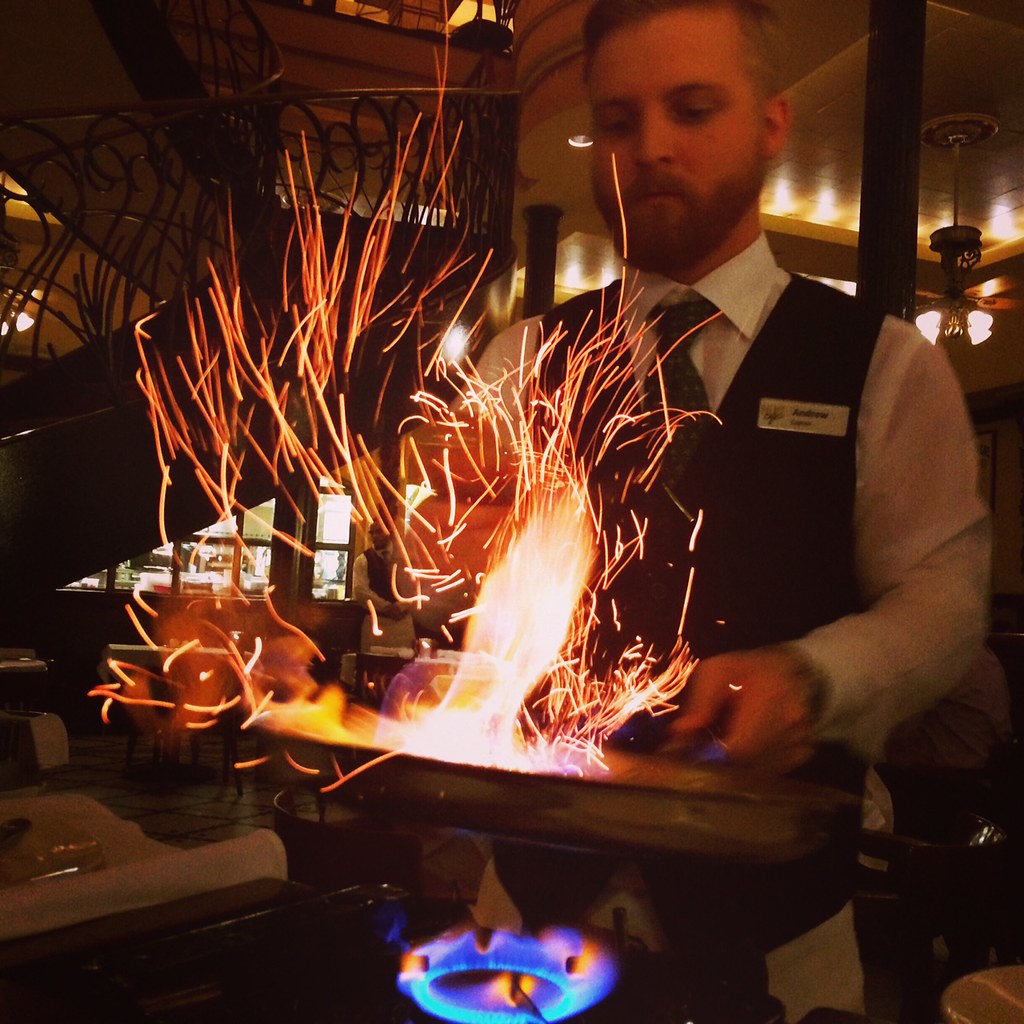 New Orleans is also home to some of the most iconic restaurants in the world; establishments that have been open for more than a century and each one impacting global cuisine in a variety of ways. You’d be surprised to hear just how many world-renowned meals were created in The Big Easy. One of my favorites, naturally a dessert, is the Bananas Foster. In the early 1950s New Orleans was a major port for bananas and Owen Brennan, owner of Brennan’s Restaurant, challenged his chef to include bananas in a new dessert. The resulting dish was of course the Bananas Foster, named after a friend of Mr. Brennan’s. Traditionally made tableside, the flambé is not just part of the show, it’s an art form for the servers. I enjoyed this delicious dessert at another Brennan family restaurant, The Palace Cafe on Canal Street.

As a Southerner myself, I well understand the allure that the concept of the South has for millions of people around the world. A couple of years ago I met an Australian whose number one travel dream was to road trip through Mississippi, Alabama and Louisiana. At the time I thought it a little unusual, but the more I think about it the more I understand it. The South has been (usually poorly) portrayed in countless movies, TV shows and books to the point where our pace of life has become an attraction unto itself. While New Orleans certainly isn’t your typical Southern town, that same classic charm can be found in spades, especially in the languidly peaceful Garden District.

Developed in the 19th century, the neighborhood is home to the best collection of historic Southern mansions in the country. Walking along the streets shaded by massive magnolia and live oak trees, I felt more like Rhett Butler than a slightly grumpy blogger from Washington, DC. A great first introduction to the neighborhood is to experience it, not just look at it, by enjoying a traditional Southern cocktail at The Columns Hotel on Saint Charles Avenue. 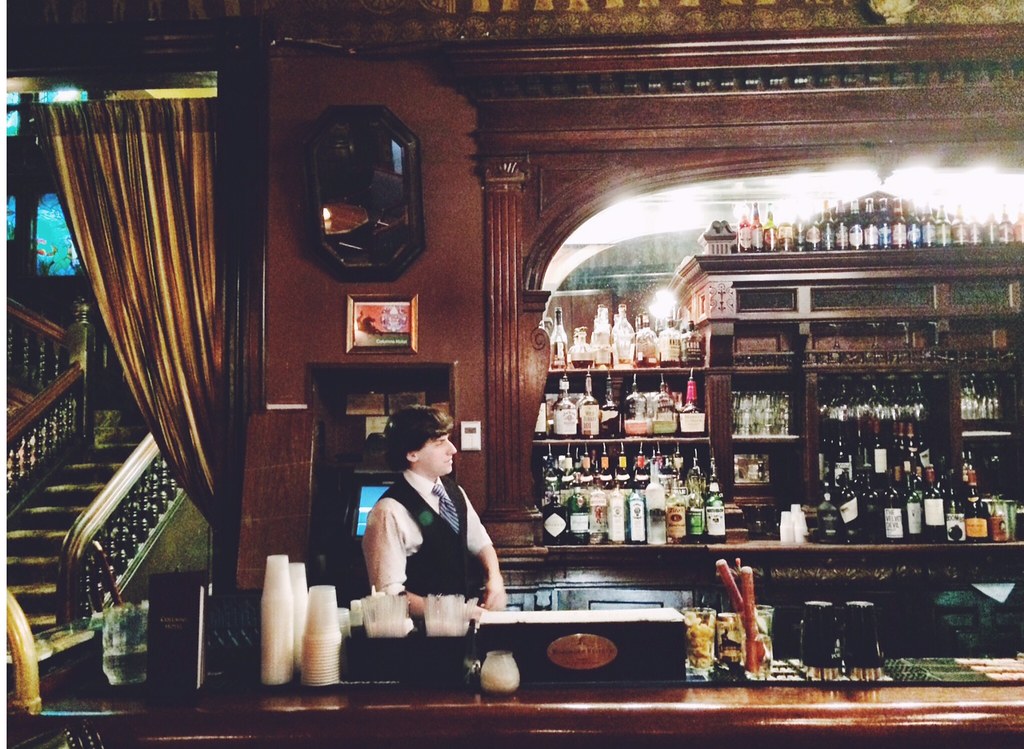 Built in 1883 as a private home, the dark carved mahogany walls and the coffered coved ceiling are old fashioned Southern elegance at its finest and on that large, New Orleans style verandah you have the perfect spot to people watch and just enjoy the warm evening air. You don’t have to be a hotel guest to come in and poke around, looking through rooms almost ridiculously decorated and over embellished. I loved it, and choosing from the menu an Old Fashioned or a Pimm’s Cup cocktail there is no better way to throw yourself into the deep end of relaxed Southern culture. 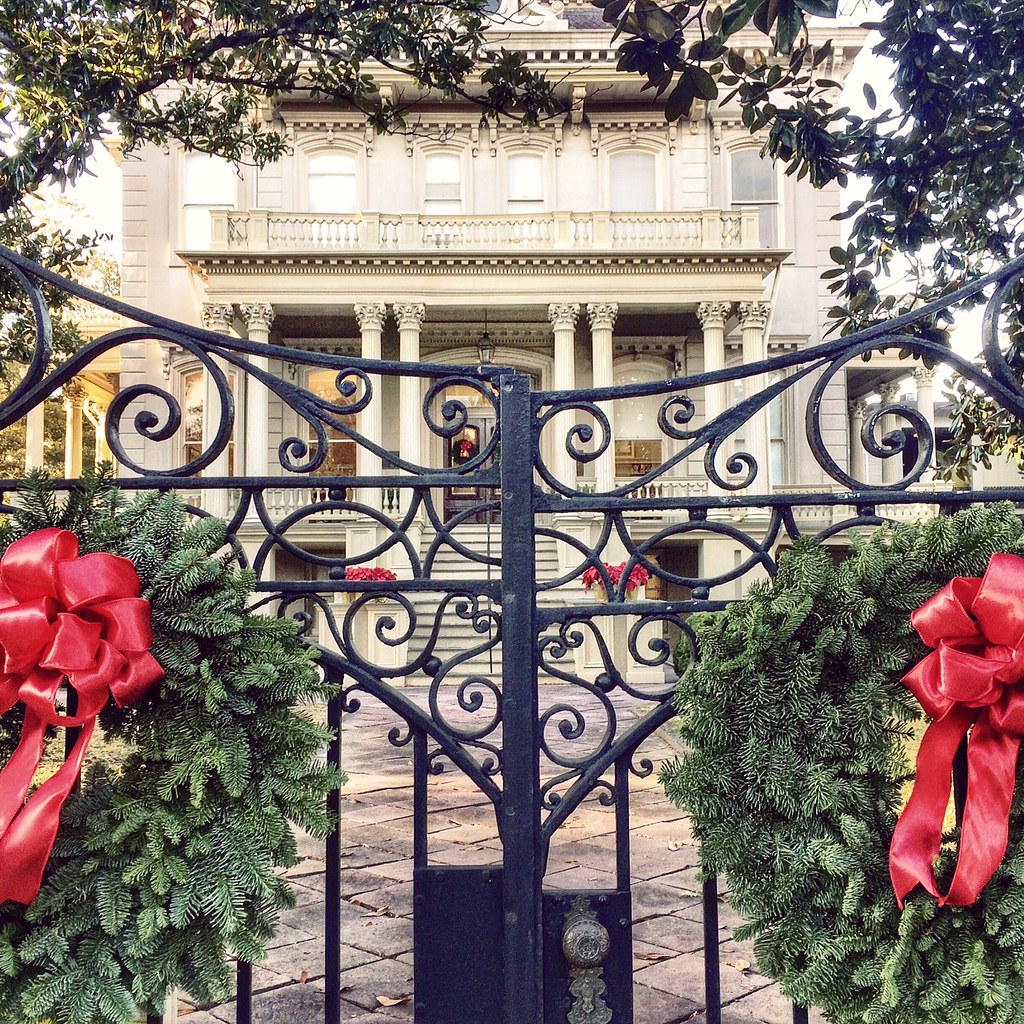 Of course, everyone has to do a Garden District tour while they’re in town. There’s nothing quite like walking around the neighborhood for a few hours learning the hidden histories of the stately homes that grace the avenues. It’s remarkable to think of the events these impressive manors have seen over the decades and it’s even more incredible to think of the families who live in them today. Of course, not all remained private homes and such is the case with the mansion that caught my eye on 2343 Prytania Street. Beautifully decorated for the holidays, the Bradish Johnson house was built in 1872 for a staggering sum of $100,000 by a very wealthy and slightly infamous sugar plantation owner. A New Yorker, his old home site in New York City is now home to Chelsea Market but his grand New Orleans estate was converted to a private school for young women back in the 1920s and stops folks like me who casually walk by with its classic Southern charm and beauty. Nearly every home has a similar history, a story hiding in between the moss and oak trees, it just takes a curious person to uncover them.

New Orleans is a slightly off-kilter city, but it always has been. Thanks to its position as a port city, and an important one at that, New Orleans has always seen people from all walks of life grace its streets. It has also almost always welcomed them; there was no other choice really. New Orleans was home to people who weren’t accepted anywhere else creating a commingling of unique personalities that doesn’t have an equal in the US. For more than a century, if you were a little different then New Orleans was the place for you. This naturally has influenced every facet of the city and over time created the wonderfully beautiful and quirky town tourists love to visit today. 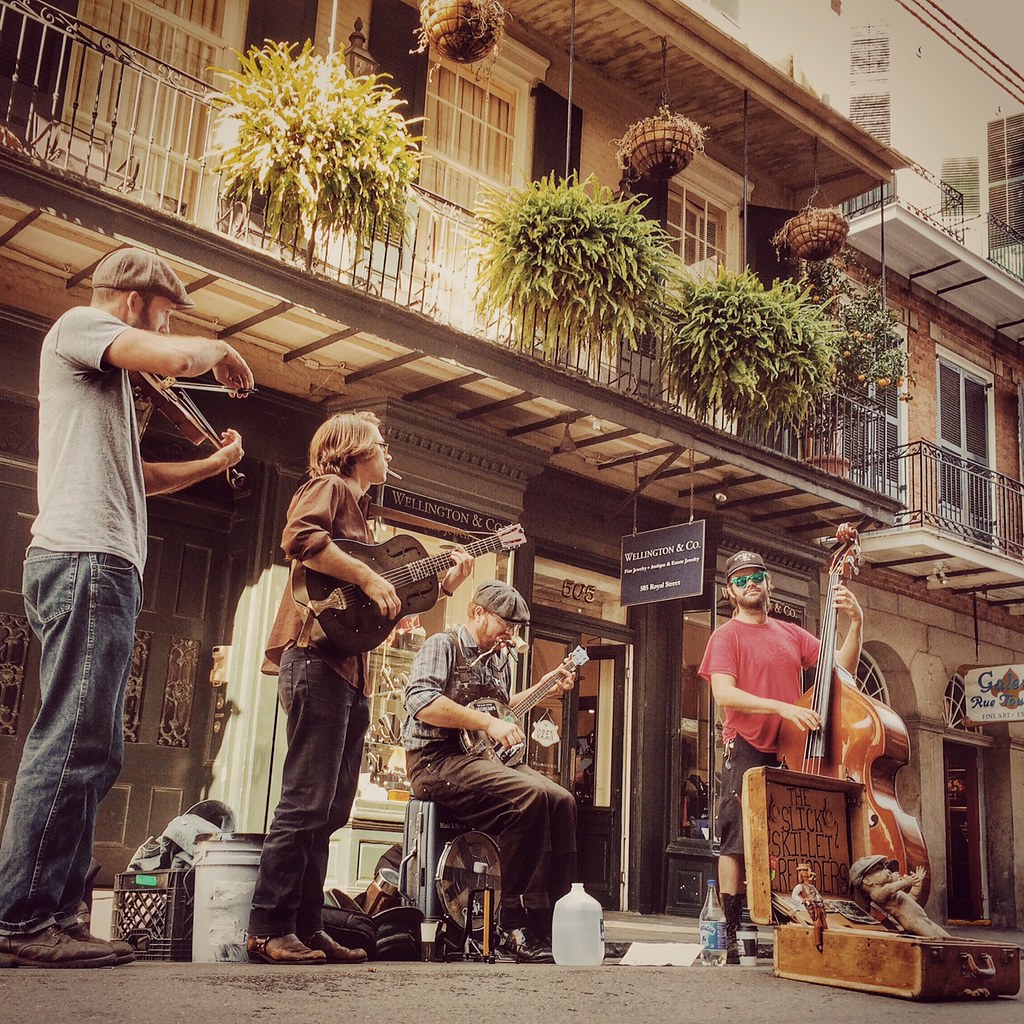 Finding this inner-quirkiness is not a challenge, just walk down any street for a few minutes and it’ll make itself known. What I love most about the city though is its love of music. Music is almost as important to New Orleans as is food and along with the culinary arts, defines the city. Blues, jazz and more all got their start in New Orleans and the tradition of live, local music influenced music not only in the US, but certainly around the world. The city still embraces this love of great live music, from small clubs to nearly every street corner. While walking along Royal Street I found this small group of musicians jamming to some American roots music, a great mix of rockabilly and who knows what else. It was one musical moment of many, but to me THIS is New Orleans at its best.

Leaving the French Quarter and continuing on to the nearby Faubourg Marigny neighborhood, your need for avant-garde and bohemian beauty will be fulfilled. This small grocery and deli has been serving the eclectic Faubourg Marigny neighborhood for years; its colorful and quirky design the perfect representative of a sometimes offbeat but always interesting part of New Orleans. Life in the Marigny is centered along Frenchmen Street, home to artists and some of the best live music in town. The Marigny is also one of the oldest parts of town, right next to the much more famous French Quarter but this fun and never boring neighborhood is usually devoid of the tourist crush making it the local’s version of Bourbon Street. 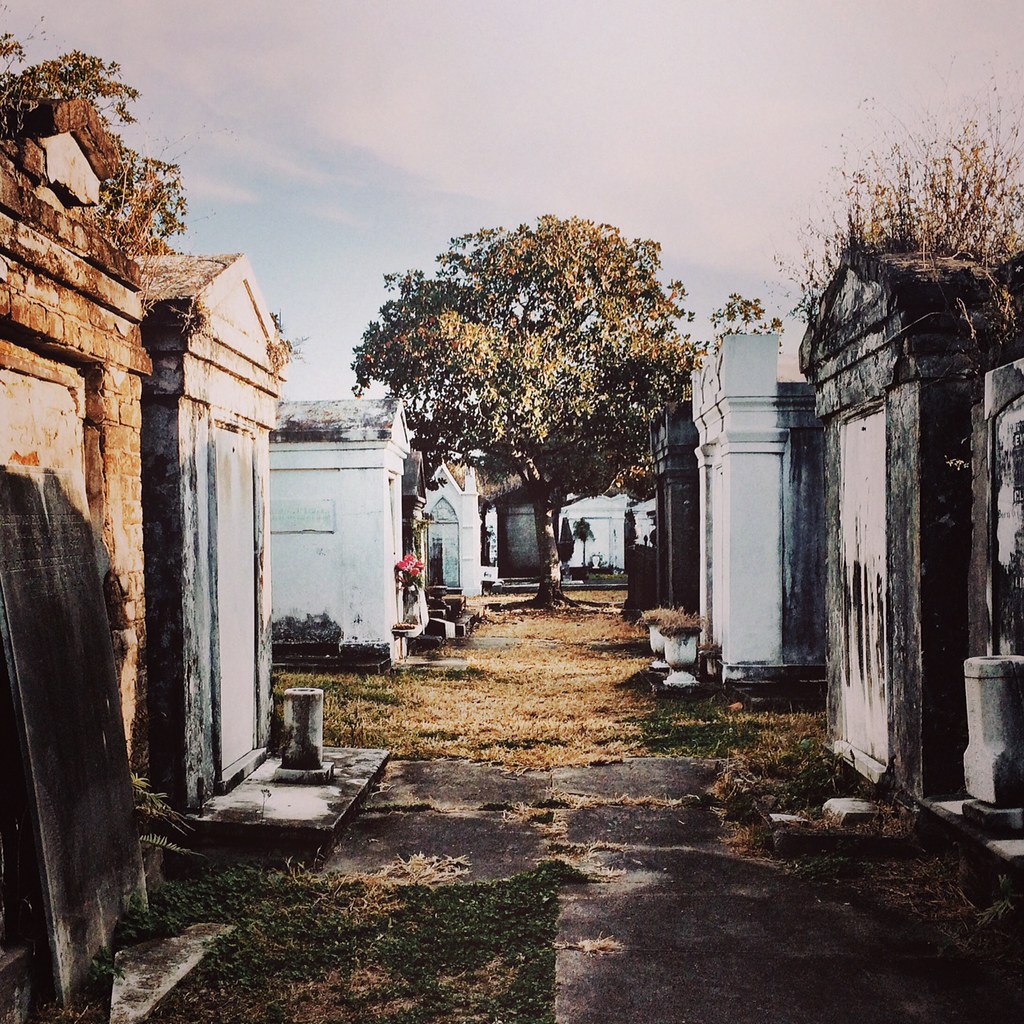 My final moment in New Orleans that I think defines the travel experience there was back in the Garden District at Lafayette Cemetery No.1. We all know that New Orleans lies below sea level, so burying bodies in a traditional cemetery just isn’t an option. That’s how this type of aboveground tombs first developed, a style reminiscent of some others found around the world. So many ghost stories and untold tales live in these cemeteries, showcasing another element to the city – its love of the slightly morbid. Folks in New Orleans approach issues concerning life and death a little differently, and I think that is certainly seen here. The cemetery is also home to a lot of the literary influences for Anne Rice, a New Orleans native.

New Orleans is a very special city and is so much more than loose women and cheap drinks on Bourbon Street. The city has played an important role in the history of the US and even in the cultural history of both African Americans and the gay and lesbian communities, just to name a couple. It’s also a city that has been through a lot. Nearly a decade has passed since the horrible devastation of Hurricane Katrina, but the city finds itself in a good place. It has rebuilt and reimagined itself as it has had to do many times in the past. There’s a certain spirit here and it’s that spirit that not only allowed the city to pick itself up and rebuild, but it’s also the spirit that draws so many to visit. New Orleans is not like any other city for all the right reasons and this spirit is what folks like me try to capture, if only for a few days, every time we experience the best of The Crescent City.