Almost immediately after my first trip to Jordan three years ago, I wrote about my intense appreciation of Jordanian food. During those three years whenever someone asked me about my favorite food culture I always pointed to Jordan. The culinary aspect was perhaps what excited me the most about returning to this beautiful country a few weeks ago and I was thrilled to experience the same level of delicious offerings as I did the first time. But the experiences were of course a little different and I tried new dishes and developed an even more intense appreciation for this sometimes overlooked cuisine. With that in mind, I thought I’d offer a brief look into what a typical meal looks like in Jordan. Jordanian food is of course much more dynamic than this list shows; it’s grossly generalized and is but one example, but it will give you an inkling of why I enjoy eating my way around Jordan so very much. 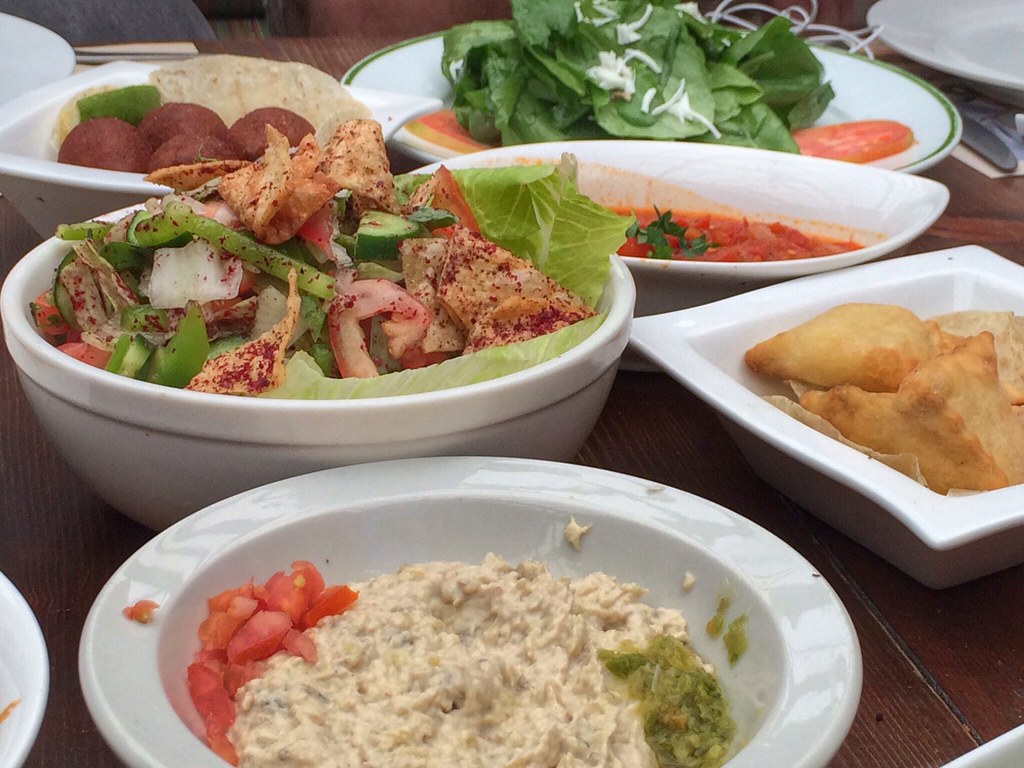 One of the aspects I enjoy most about food both in the Mediterranean and the Middle East is the culture of small plate starters or mezze. Served communally, these small portions are passed around so that everyone can get a little taste of everything on the table. Almost every day during my trip, lunches and some dinners started this way, the massive array of dishes sometimes overwhelming. The first time I sampled these small dishes in Jordan no one told me they were just the beginning act and I nearly filled up on the delicious portions. Some of my favorite small dishes that are common throughout Jordan include:

Hummus – This classic Middle Eastern staple is done exceptionally well in Jordan and you WILL find it on every table at every meal, even breakfast. Made from chickpeas, spices and olive oil, it seems to be the one dish everyone can enjoy no matter their usual preferences, from vegetarian to ardent meat eaters.

Kubbeh – A personal favorite, these small fried balls are made from minced meat covered in a crust of bulgur and then fried.

Baba ghanoush – Eggplant is a very common ingredient in Jordanian cuisine and it’s perhaps best prepared in baba ghanoush. A blend of cooked eggplant with onions, tomatoes, olive oil and spices, it’s just as common as hummus from my own experience. 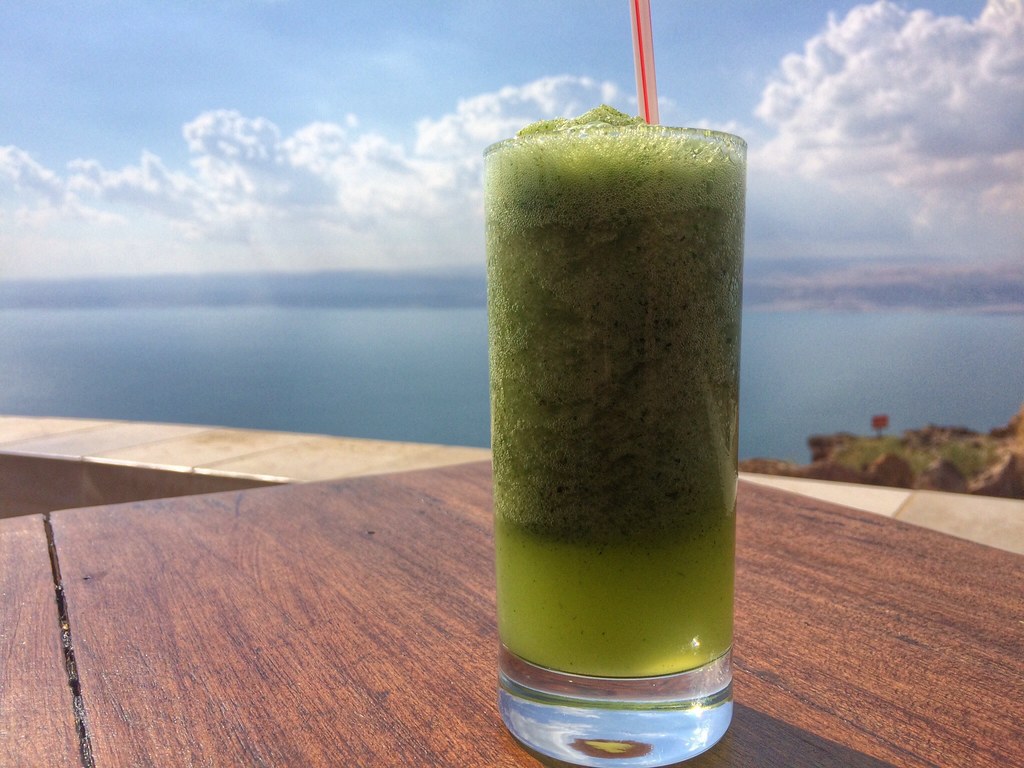 Tabbouleh – More salad-like than the other dishes, this is common throughout the region and is made from tomatoes, parsley, mint, onion, olive oil and lemon juice. It’s a tasty way to balance the other, somewhat heavier dishes.

Breads – These are served throughout the entire meal and honestly speaking, the bread in Jordan is amongst the best I’ve enjoyed anywhere in the world. There’s the traditional pita bread, which we’re all familiar with, but there are also several other specialty breads served throughout the country. Shrak is a Bedouin-style bread that is very thin and made hot immediately before or even during the meal itself.

Mint Lemonade – This drink was something I somehow missed the first time, but which I quickly became addicted to on my second visit. It’s just what it sounds like, a mint lemonade that is the best and most refreshing I’ve tasted anywhere in the world. It’s heavy on the sugar though so drink in moderation. 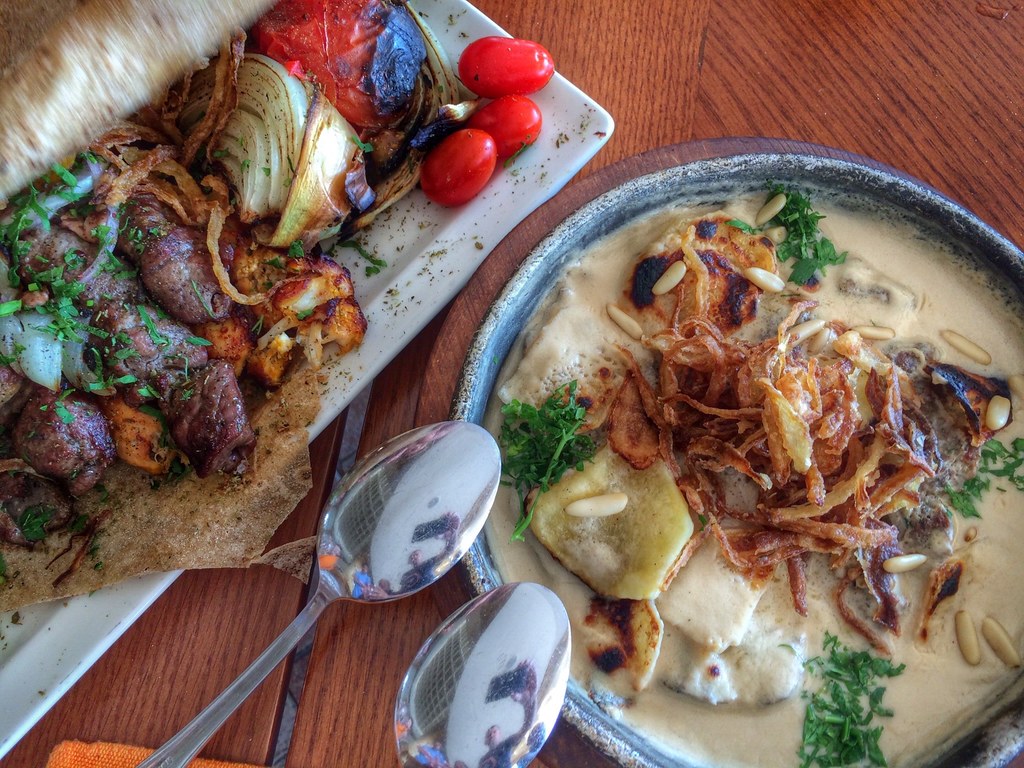 The main course takes many different forms around the country, but here are a few different dishes I enjoyed particularly.

Grilled kabobs – This was my go-to meal in Jordan thanks to how common it is and how good it tastes frankly. A variety of meats including lamb and chicken are roasted to perfection and served along with additional mezze and of course bread. I like this option because like the small plates, it’s shared communally so that you can eat as much or as little as you like. 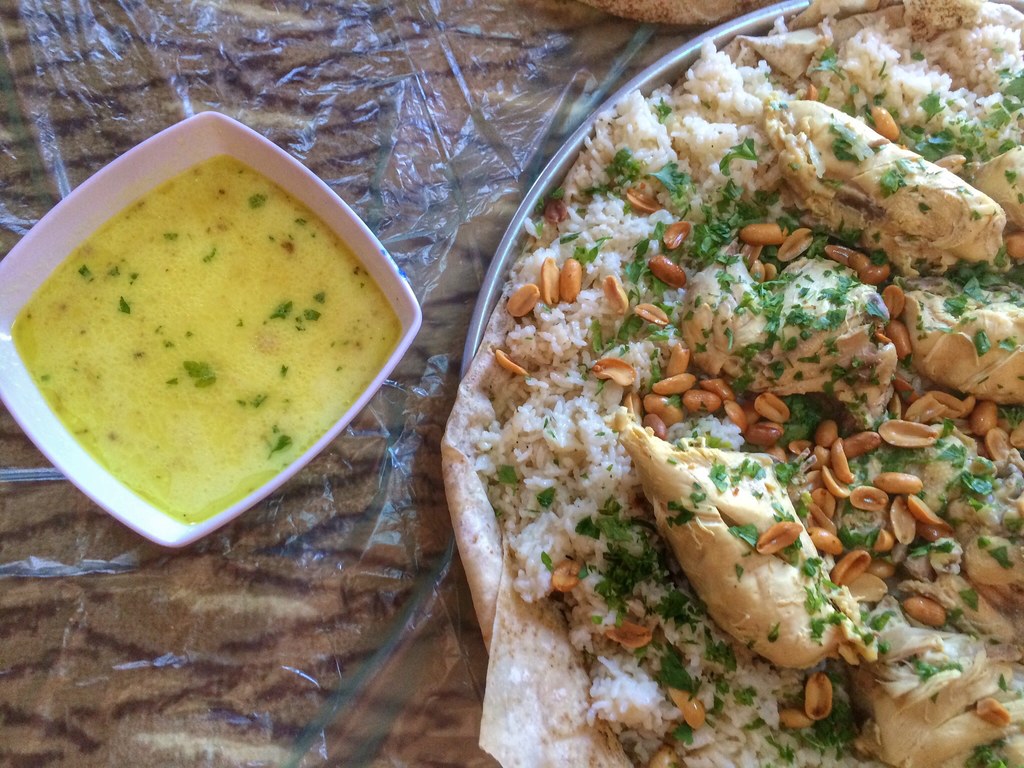 Mansaf – The national dish of Jordan, enjoying this with friends is a must-do culinary experience for every visitor to the country. Usually made with lamb, it’s cooked in a sauce of fermented dried yogurt and served with rice and topped with shrak bread. The traditional way to eat mansaf is with your right hand with which you create small balls of meat, rice and sauce that you then pop into your mouth. It takes a while to get a hang of the process, but once you do you’ll instantly feel like a local.

Zarb – This dish has its roots in Bedouin culture and is a common way to create a meal for a big feast. An underground pit is built into which racks of meats and vegetables are cooked for several hours. The entire process takes a lot of time and effort, but the results are well worth it. Succulent meat that falls off the bone and roasted vegetables that are amongst the best you’ll ever try. 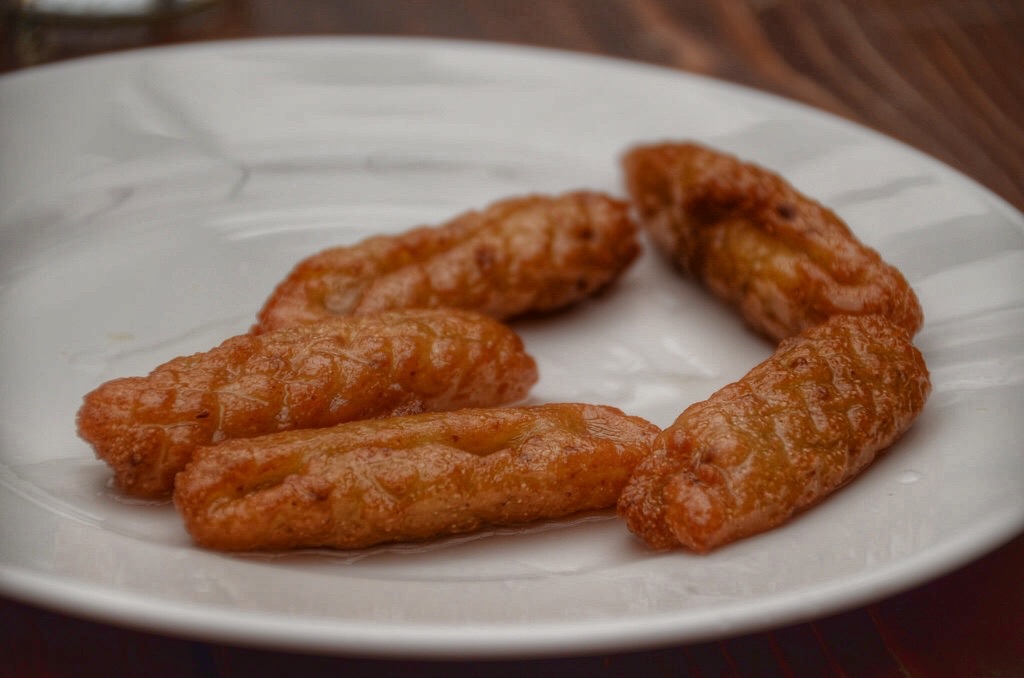 Dessert and Coffee or Tea

Desserts aren’t all that common in this part of the world and the ones that are enjoyed tend to be very sweet. More important is the coffee and tea culture, which is taken very seriously. Still, there are certain common treats to properly finish off a meal in Jordan.

Awameh – These were actually too sweet for me, which is saying a lot. They’re small fried pastries soaked in syrup or honey that in turn creates a hard crust. One after a big meal is a nice finish, but more than that and a visit to the dentist is in order.

Knafeh – This isn’t only my favorite dessert in Jordan, but is one of my all-time favorite desserts anywhere in the world. Knafeh is made using very fine vermicelli-like pastry, which is heated with butter then a soft, white cheese is spread over it, more pastry added, and so on. The dessert is then topped with a sticky syrup and some crushed pistachios. When served hot there honestly is nothing better; it’s a dessert I will never get tired of eating. 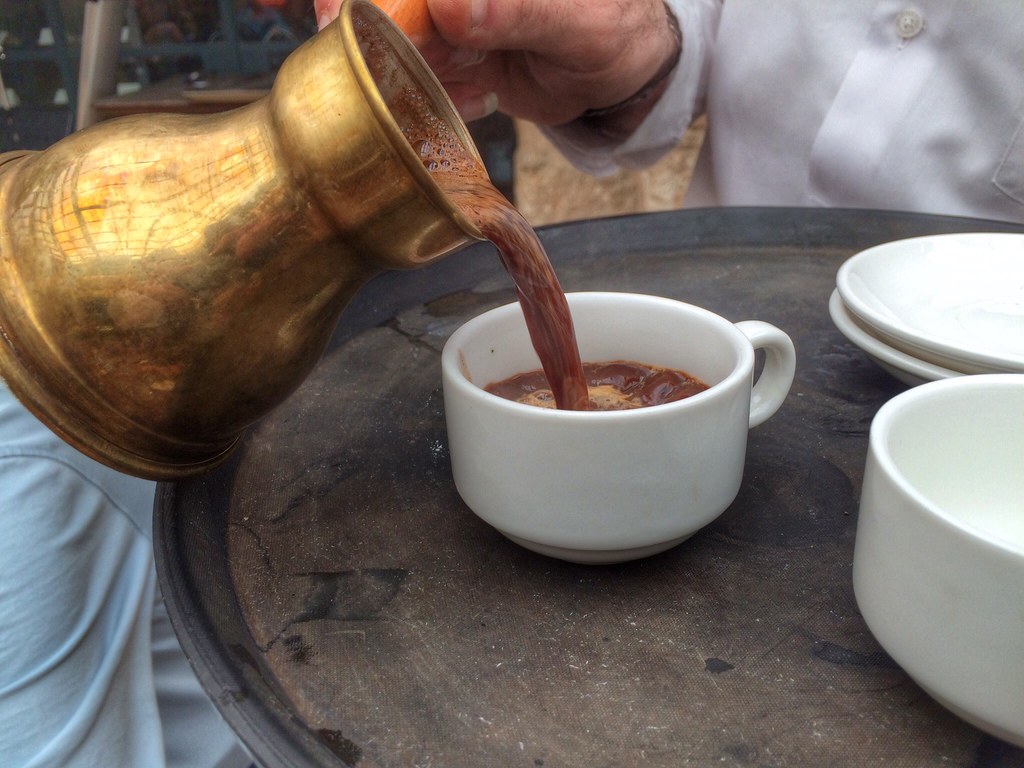 Coffee – Whether it’s Arabic or Turkish style, the coffee in Jordan is strong and plentiful. Common throughout the day, a cup after a meal is thankfully normal. Due to its strength it’s not usually served in large cups, but that was fine with me. Even a small amount was enough to keep me going for several more hours.

Tea – Also common throughout the country, it was the Bedouins who really perfected this beverage. Different from tea you’re used to, the tea in Jordan is flavored with local herbs that create a very sweet and slightly addictive drink.

Jordanian food is a broad category and what I decided to share with you today is just a brief glimpse into the complex culinary culture the country enjoys. I hope though that it demonstrates one thing – that the food is an incredibly important part of the travel experience in Jordan and instead of relegating it to a secondary status, it should be one of the major focal points of any trip to this beautiful country.

From this list which Jordanian dish sounds best to you?