I’m not a foodie, not by any stretch of the imagination. I don’t like seafood, most vegetables and if something arrives with foam on it I assume it’s gone bad. But that doesn’t mean I don’t enjoy food, I do; a lot. More than anything I love finding new foods and meals around the world when I travel, truly learning more about cultures through the taste buds. Sometimes this works out well (bunnychow in South Africa) and other times it doesn’t (fois gras ice cream in France). So you’d think that it’d be hard for me to pick a single meal, one evening that I enjoyed the most. Well, you would be wrong because there is one, and I think about it almost every day.

I was in Taipei, Taiwan working on a project with AFAR Magazine. My assignment was to put together a piece that highlighted the best of Taiwan. One evening our guide took us to a local restaurant for what she described as a Peking Duck experience. Having never eaten this iconic meal, much less had it be an entire experience, I was a little apprehensive. A year before I had nibbled on a Peking style duck in Melbourne’s Chinatown and the experience was frankly awful. I kept my eyes open for nearby fast food establishments that I was sure I’d be patronizing after what I assumed would be a disappointing meal. As usual, I was oh so very wrong. 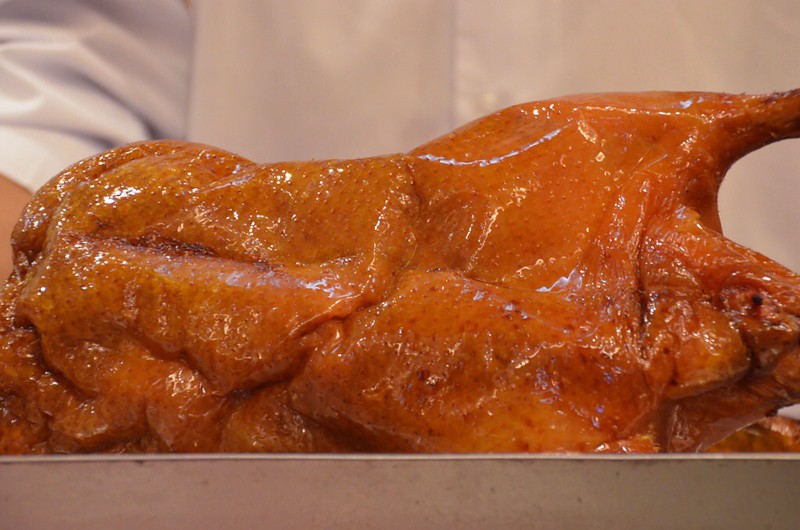 Celestial Restaurant, located in Taiwan’s Zhongshan District, has been serving up their signature dish for generations and while it is a matter of personal opinion, Celestial always makes the list of top duck restaurants in the city. You see, Peking Duck isn’t just a nice meal, it’s an obsession and lovers of this comprehensive dining experience take it very seriously. It’s not as easy as just ordering off the menu either, it’s a process with many decisions to make along the way.

Your options are duck served in one, two or three ways. Option one is the classic serving of the tasty duck, option two involves mixing the meat with scallions and soy sauce and serving it over rice and the third way is making a soup from the stock. Keep in mind, it’s not one or the other, if you order it three ways, you get all three ways and believe me, it’s a lot of food. That’s perhaps one of my favorite aspects of this meal actually, that it’s meant to be shared as a communal experience.

Sitting there in a crowded dining room full of duck lovers in various stages of culinary enchantment, my eyes opened wide when my own experience started with The Presentation of the Duck. This is apparently very important and restaurants that don’t first show diners their own personal duck before carving it up are looked down upon. Like approving a fine wine, we gave our nods of approval and waited eagerly for the main event.

Before any meat is brought out though, the meal starts with the skin. Delicious, crispy, amazing duck skin. A plate of this honey colored delight is brought out along with hoisin sauce, scallions and small tortilla-looking crepes. The proper process is to fill the small doughy disks with sauce, scallions and of course skin and eating it like an Asian-inspired taco. My first bite sent ripples of energy through me as my taste buds exploded in approval. Separately the components are fine, but nothing special. However when combined they create a culinary alchemy that in my opinion is unparalleled anywhere in the world. More than any other part of the duck experience, those little crepes are worth the trip alone.

Following the skin tacos came the meat itself, followed by soup and so on. As I sat back digesting the golden avian in a state of magical ecstasy, I felt a little cheated. Cheated that I had never in my 37 years of existence experienced this meal. Cheated that the simple layering of flavors that become something so special had not been an integral part of my life. Why aren’t their Peking Duck restaurants everywhere, as common as McDonald’s or a simple steak house? But then I realized that was part of the reason why this meal was so special. Because truly well done versions of it can’t be found everywhere. Sure, it’s on the menu of your local Chinese take-away, but it has no parallel to what I experienced in downtown Taipei. If nothing else, it gives me a great reason to return to Taiwan’s capital city.

No one was as surprised as I was that in a country known for vegetables and seafood that I would find my favorite meal of all time, but that’s exactly what happened. I let go my misconceptions about the meal and decided to try it anyway and that is perhaps one of the best food-related decisions I’ve ever made.

What single meal is the best one you’ve ever had?