Today I am pleased to share a guest post by friend and travel blogger Dustin Main. Dustin is a serial entrepreneur, digital nomad, photographer and perpetual world traveler. He started traveling in 2009 on a one-year journey that never ended. You can find him on his site A Skinny Escape or his tech blog, Too Many Adapters.

If you’re a small town that isn’t marked on the road map with a giant star to draw in the tourists, you have your work cut out for you.  However, if you’re a town in New Zealand, you probably have an imaginative idea to draw people in.  In Nelson, they have the “World of Wearable Art and Classic Cars Musuem” (really).  In Oamaru, they have Steampunk HQ.

If you’re unfamiliar with the idea of “steampunk,” you can think of it as a mix between the old Victorian steam-powered era, mixed with a polished futuristic style.  It’s part sci-fi, part fantasy. 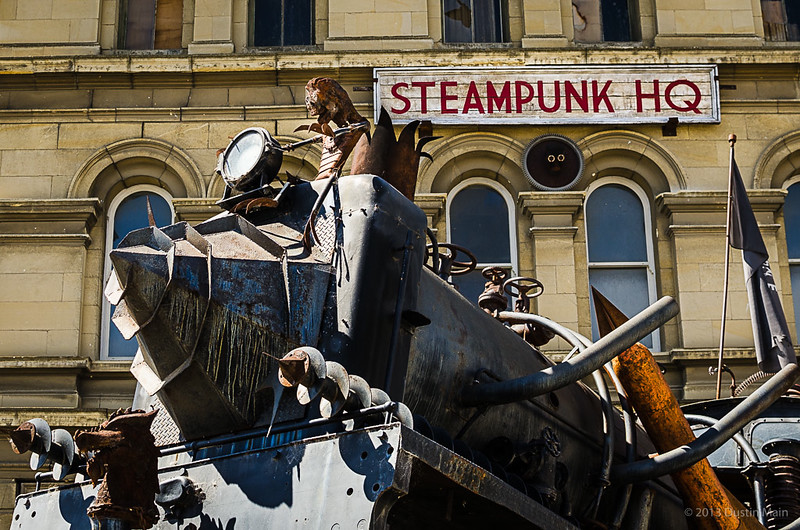 Steampunk HQ is what you get when you gather a bunch of artists in one small town who like to weld large pieces of metal together to make some cool art.  That art manifests itself as runaway steam-powered trains about to launch off of the tracks, blimps taking to the skies, and a skeleton riding a crazy tractor.  And that’s just the start of it.

In terms of style at Steampunk HQ, it’s a little darker than most styles of Steampunk that you may have seen in the books and movies.  Not quite as glossy, not quite as refined.  It’s raw, moody, and a little tongue-in-cheek.  It’s also a work-in-progress, with new pieces popping up all the time, and artists coming in from around the world to work on new projects.

Many of the larger projects outside (including the blimp and train) can be activated with a small donation (usually a couple of dollars) for some larger-than-life animatronic action. 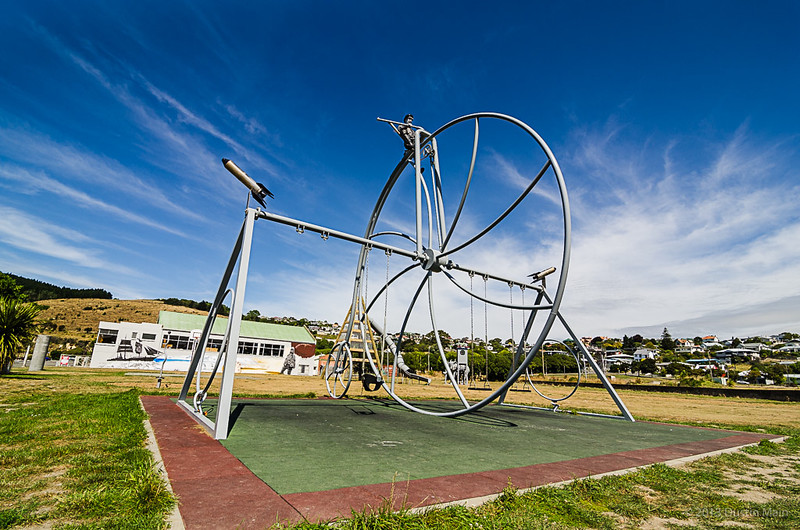 If you aren’t sure if this sounds like it’s up your alley, you can find pieces all around town, including this penny farthing swing set down by the ocean.  All in all, the museum and attached work yard is cheap entertainment at $10 for admission, and could give you 20 minutes to several hours worth of entertainment.

If you’ve managed to stumble upon Oamaru and steampunk doesn’t seem right up your alley, all is not lost.  Hit up the Whitestone Cheese factory before you head out of town.  My personal favorite was the Windsor Blue, but just grab a 4 cheese selection platter & some crackers if you can’t make up your mind.  Then find a nice piece of grass along the highway and make yourself a little picnic.

What ares some unusual places you’ve found on your travels?

Dustin Main is a serial entrepreneur, digital nomad, photographer and perpetual world traveler. He started traveling in 2009 on a one-year journey that never ended. You can find him on his site A Skinny Escape or his tech blog, Too Many Adapters.