When I arrived at the Dreams Resort in Puerto Vallarta, Mexico I thought I knew what to expect. Tropical views with swaying palms were a given, as was a pina colada with a sweet cherry to accompany me to the pool. What I didn’t expect to be an important part of the guest experience was a comprehensive turtle release program led by a staff biologist. Yet there I was on my second night, holding a tiny, 10-hour old baby turtle as I released him into the suddenly imposing ocean and wishing him luck as he began his journey.

I was a guest of the beautiful Dreams Puerto Vallarta Resort & Spa as part of a new initiative with the company that will allow me to experience their properties and share what it’s really like to vacation with them. I’ll get to the reviews and city details soon, but I just had to start the series with this heroic program run by Dreams Resorts. 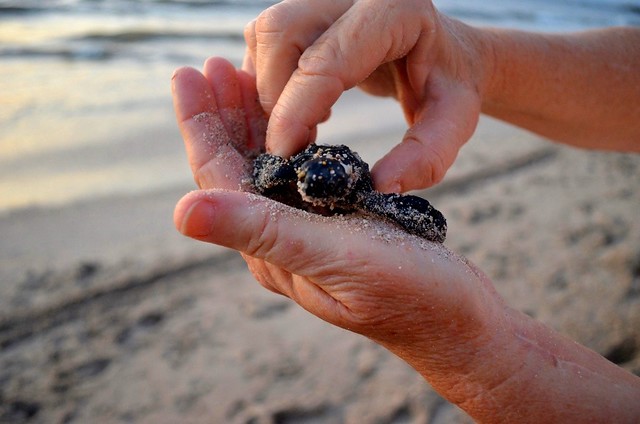 Heroic is a strong word you’re saying to yourself, others are probably already accusing me of sycophancy and suckupism, but I think the term is apt. Anytime a for-profit company does something altruistic that benefits not the bottom line, but others is always cause for the term heroic.

First initiated in 1993, “Dreaming of Freedom” program is designed to protect the endangered Caray Green Sea turtle by educating resort guests and the surrounding community. Every year, from June to September — the female turtles’ reproductive season — guests and employees have the chance to learn about the plight of the turtles and the importance of their preservation.

I was lucky, it was early December when I visited the resort, which is usually well past the turtle release season that runs June through October. Excited as ever to participate in a wildlife experience, I and about forty other guests congregated around the mysterious boxes in front of the turtle conservation sign just before sunset. 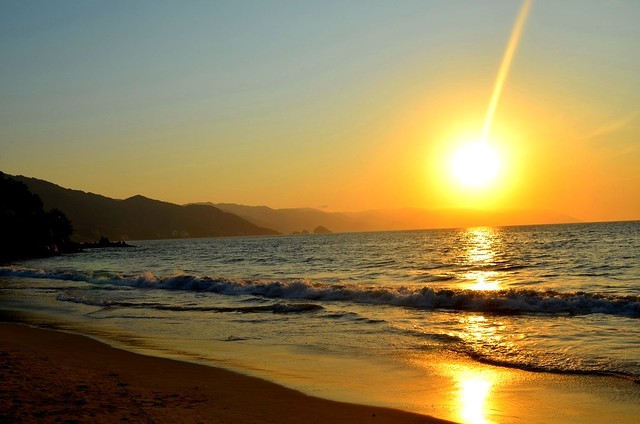 The sunsets at Dreams Puerto Vallarta are a thing of beauty. The sun slowly slinks behind the hills alongside the natural private beach turning the water into a sea of fire. It was with this backdrop that we began our lesson in turtle conservation.

Annually, the Caray Green female sea turtle returns to the beach of their birth to dig nests and lay eggs at night as they have for hundreds of thousands of years. Resort employees and volunteers aid in the effort by collecting the nests for preservation in the resort’s Conservation Center. This prevents possible destruction or damage to the eggs from inclement weather, natural erosion, high tides; predators like seagulls, and from the presence of humans on the beach. Every single day the resort’s dedicated staff counts and dates the eggs, controls the temperature of the nests, and monitors the condition of the sand. Upon hatching, these tiny creatures are carefully returned to the beach at night, where they instinctively go towards the water, following the horizon and the moon. 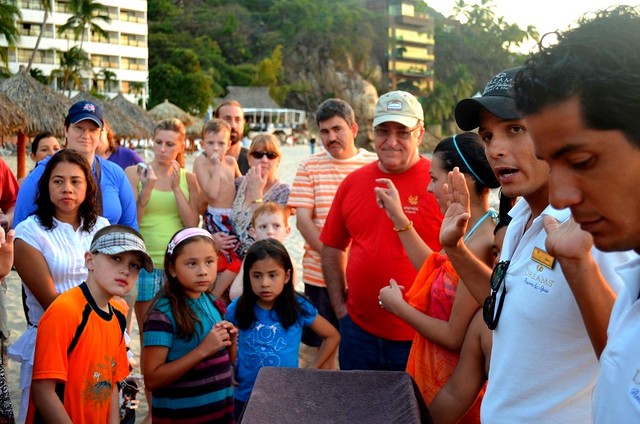 Finally it was time. The background information was great, but we were all there for one reason, to see cute baby turtles and release them into their new home. The tiny amphibians were actually larger than I thought anything alive for a mere ten hours would be, but they were still extremely delicate. Before handling, guests were instructed to ‘wash’ their hands with sand, so that the turtles could learn the scent and one day return to the beach. Amazing stuff. 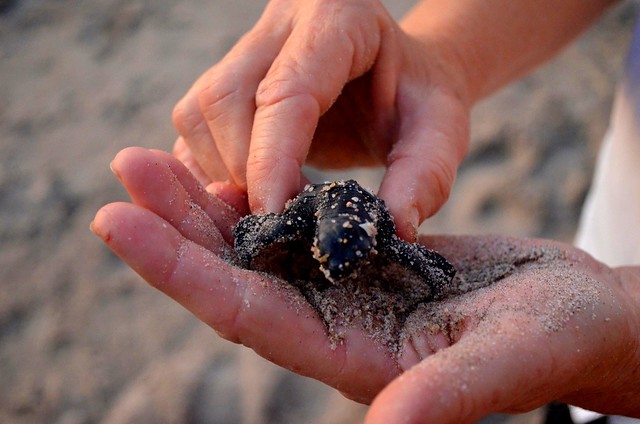 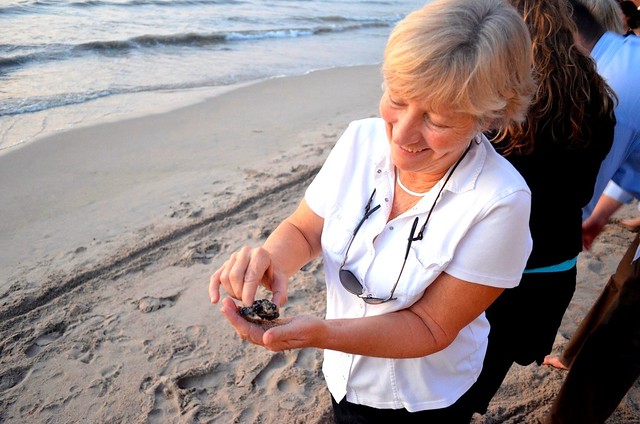 We approached the roaring waves and were each given a turtle, held gingerly between our fingers. I couldn’t help but think of Twain’s Celebrated Jumping Frog of Calaveras County as we all set the miniscule animals on the beach and watched them go. Drawn by the sound of the waves, the smell of the ocean and the light of the sunset the turtles scampered as well as they could towards their new home. Some were faster than others, a few were obviously confused and still others found assistance in the form of waves to carry them out to see.

Almost immediately it was over, our newly adopted turtles were gone into the vast ocean and we all stood there wistfully, wondering how our new charges would fare in the open water.

Dreams Puerto Vallarta Resort & Spa, along with other AMResorts in Los Cabos and the Riviera Maya, encourage surrounding municipalities to bring nests from nearby beaches to the resort for preservation. In one recent season, more than 33,000 eggs were wedged, with approximately 30,000 turtles being released, and thereby saved; all at one resort. In support of this special program, guests and their families are encouraged to adopt their very own turtle through voluntary donations. Proceeds of the donations go towards the improvement of the on-site turtle nurseries and the continued education of the each resort’s Marine Specialist. 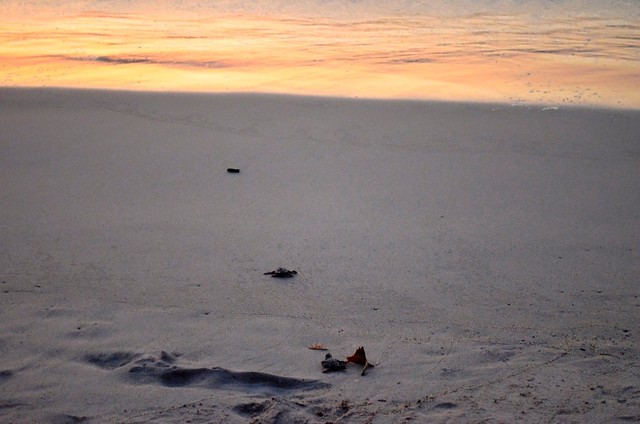 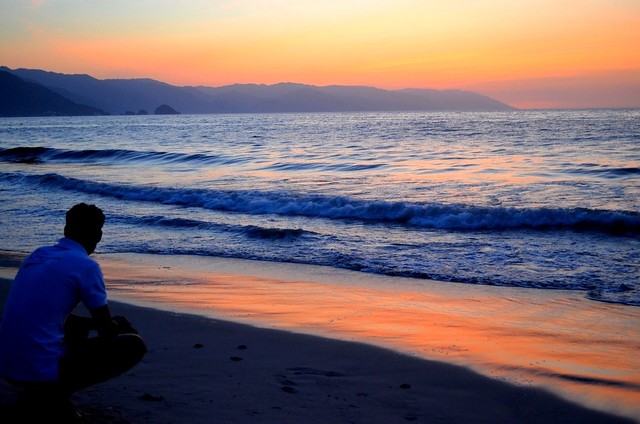 It’s amazing how much of an impact a simple act like releasing the hatchlings back into the sea can have. As a guest on vacation, I am thankful for the opportunity to not just participate in a remarkable experience, but to give back to the ecosystem that works so hard for my own enjoyment.