I usually stay away from what I perceive to be over-touristy experiences, but the Sounds of Silence dinner at Uluru intrigued me. A trip to Uluru, or Ayers Rock, tends to be fairly scripted. The resort experience is like a cruise ship in the desert and every option for activities and meals tends to be controlled by the same company. That’s why I wasn’t sure if the Sounds of Silence dinner would actually be worthwhile, but I’m glad I took the leap and embraced the corny.

Sounds of Silence is a signature activity at Uluru and promises guests a unique dining experience under the stars. My fears going into it though were that it would be expensive, predictable and packed with tourists. I was mostly right, but as it turns out none of those things were necessarily bad. 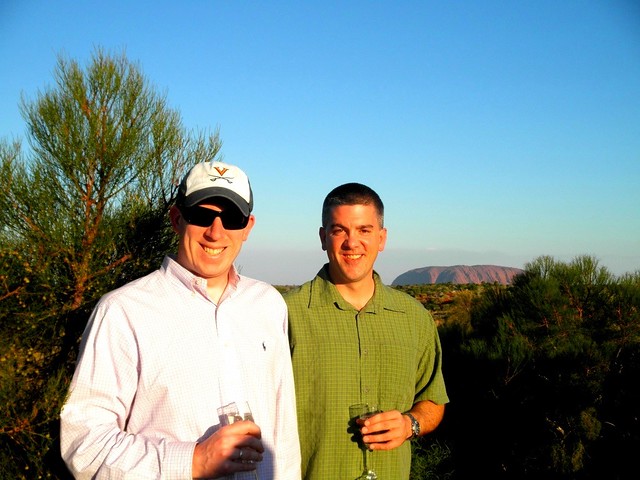 The dinner had an inauspicious start when a massive coach bus picked us up in front of the hotel, before moving along to the other properties at the Ayers Rock Resort. I had a sinking feeling in my gut as I prepared for an evening of awkward conversation with complete strangers.

The sun had begun its gradual descent as we arrived at a sand dune in the middle of nowhere. Greeting us was a host with glasses of champagne, an open bar and a guy playing the didgeridoo. I looked behind us and was stunned to see Uluru in all its glory, the sunset transforming the colors of the massive rock once again. Ok, not a bad start.

There were a lot of people there, but it didn’t seem like it. Everyone was smiling and happy, laughter permeated the sandy terrain. People asked us to take their pictures with Uluru in the background, and we asked the same. We soon made friends with a couple of Canadians who were of a similar age, background and interest. Namely, yuppies who love to travel.

I’m not sure how or why, but the guests at our table all clicked instantly, even though we came from radically different backgrounds. There was a house painter and his wife from Melbourne, an extended family living on three continents, two doctors from Canada and yet despite, or perhaps because, of our differences we got along famously and the next few hours were some of the most fun we had on our trip. 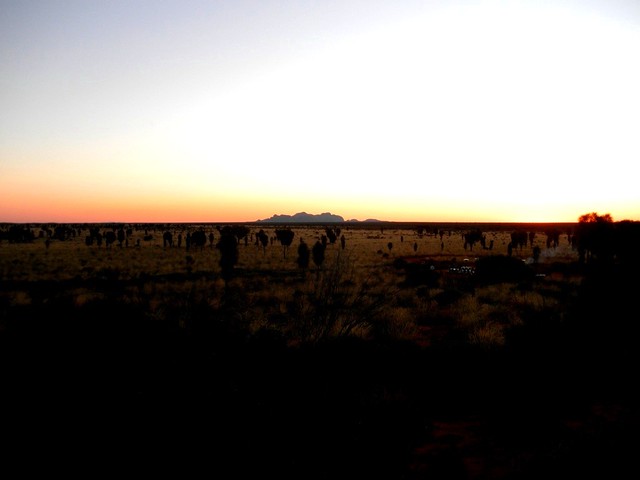 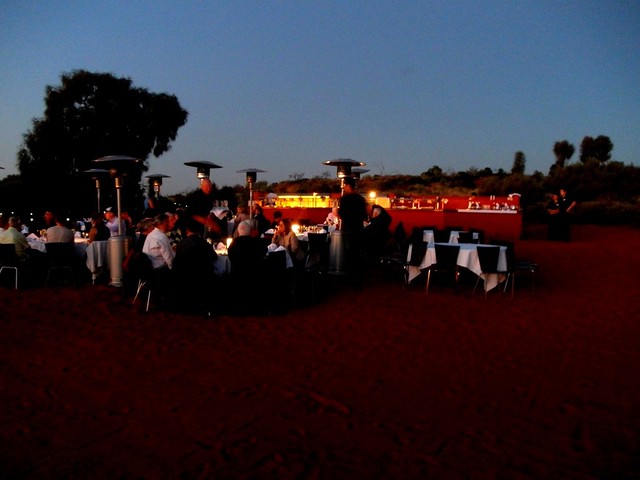 We watched as the sun set over the massive Kata Tjuta and was replaced by a rich canvas of stars the likes of which I had never before seen. Later that evening, our hosts explained some of the constellations to us and the legends accompanying them. The food itself was excellent and offered a little bit of everything, satisfying even the pickiest of eaters (me).

The night concluded and we all boarded the buses for the return home, full and tired but in a really great mood. Sure, the Sounds of Silence may be touristy but it really is one of the most unique experiences you will ever enjoy.