I don’t usually write about hotels, unless I find something really unique to say. This post isn’t any different, I’m not going to write about how great our rooms were or how amazing the service was at the InterContinental Melbourne – The Rialto, instead I was moved by the unique history of the building itself.

Melbourne at one time was the richest city in the world, thanks to a gold rush in the 19th century. During this time massive construction took place and the result was a panoply of gorgeous architecture and unique sites. Melbourne realized the need to preserve its architectural treasures and so there exists a fairly complex system of guidelines for new buildings, all with an intent to preserve the original structure. This is best seen in The Rialto.

The InterContinental Melbourne -The Rialto comprises two buildings, the Rialto and the Winfield. The Rialto building was designed in the neo-gothic style by the well-known architect William Pitt. Pitt also designed many of Melbourne’s most prominent buildings including the Princess Theatre, the Old Stock Exchange at 380-392 Collins Street and the Old Safe Deposit Building at 88-92 Queen Street.

The Australian National Trust lists the Rialto building as an example of ‘fin de siècle’ architecture. The National Trust also cites the Rialto as “one of the finest examples of late 19th century picturesque Gothic office buildings in Melbourne”.

Next door, the Winfield building played host to the offices that serviced the wool and wheat stores, plus other iconic Australian businesses. The Rialto and Winfield buildings are separated by a cobbled bluestone laneway that once echoed to the clatter of horse’s hooves.

What’s amazing about the properties is that InterContinental managed to keep not just the spirit of the structures alive, but they actually incorporated them into the newly finished hotel. Melbourne is famous for its architecture and its laneways, both of which are clearly seen in the hotel. 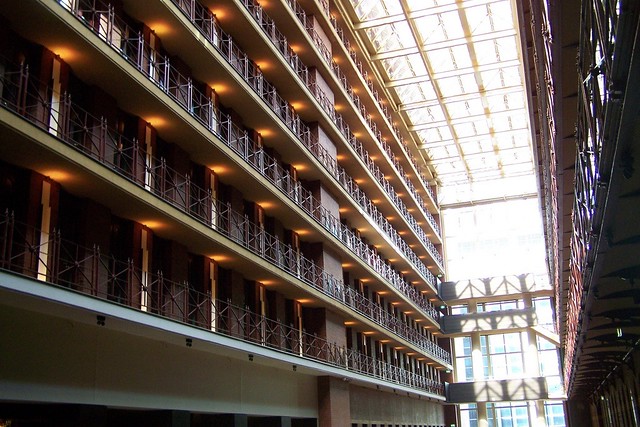 Running through the middle of the hotel is now a lobby and restaurant on what used to be a bustling laneway. The walls are the original exteriors of the famous buildings and the rooms are each unique, a reflection of the hotel’s past life. Many hotels around the world have themselves become iconic buildings, but very few have taken an existing heritage building and transformed it into a modern and well designed hotel. The Rialto accomplished both and is truly one of the most unique luxury hotels in the world.

What are some of the unique places you’ve stayed?