Labor Day is quickly approaching and with it the unofficial end to summer vacation. But that doesn’t mean it’s not a great time to visit Washington, DC, in fact the fall is one of the best times to visit our nation’s capital. After you’ve done some of the normal tourist activities, check out these four fun, family-friendly activities around Washington, DC.

Eastern Market is a Washington treasure and a secret we locals tend to keep to ourselves. Built in 1873, Eastern Market was in continuous operation until 2007, when a devastating fire closed the historic structure until it reopened in 2009. Located just a few blocks from the U.S. Capitol, during the week the market offers fantastic fresh meats, cheeses, and produce from a variety of local farmers and vendors. It is on the weekends that Eastern Market explodes into a frenzy of food and art. Every Saturday and Sunday vendors from all over the Mid-Atlantic descend on Washington to sell their arts and crafts, antiques, and food. It can get quite busy, so be sure to visit early.

Okay, technically this isn’t in Washington, DC, but it’s well worth the thirty-minute drive to visit the impressive National Air and Space Museum extension, better known as the Udvar-Hazy Center. Simply said, this is where the Smithsonian houses its collection of aircraft in a huge building modeled after an airplane hanger. Located next to Dulles International Airport, Udvar-Hazy is a dream for anyone with an interest in the history of flight. The impressive museum has more than 100 aircraft and 122 space objects on display including the Enola Gay, a retired Concorde, and even a space shuttle. There are also engaging displays covering the role aviation has played in warfare, showcasing an eerie array of cruise missiles and satellites.

The museum is highly interactive and interpreted in a way that appeals to children and adults alike. At the end of the tour, you can ascend a model air flight control tower where the art and science of modern aviation control is demonstrated. The tower offers stunning, 360-degree views of the Virginia countryside as well as the best viewing spot for incoming air traffic to Dulles. The museum is free, but there is a fee to park.

An easy Metro ride from the National Mall is the National Geographic Museum. The museum takes its inspiration from the eponymous magazine and offers a variety of exhibitions that change throughout the year, each highlighting American history, international cultures, and natural wonders.

There are usually a variety of special exhibits and visitors can wonder around the displays, marveling at the amazing photography at their leisure. Located in downtown Washington, D.C., the museum is accessible from both the Farragut North and Farragut West Metro stops. This is a perfect way to experience the adventure first-hand found in the monthly National Geographic Magazine. 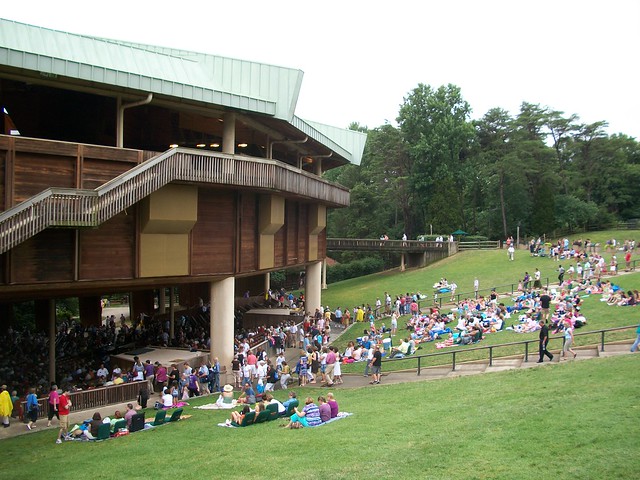 After your visit to the Udvar-Hazy Center, why not stop by Wolf Trap for an evening performance? Founded in 1966 as the result of a gift of 100 acres of Northern Virginia farmland, Wolf Trap is the only National Park in the United States devoted to the performing arts. This massive facility offers year round programming through the Barns at Wolf Trap and the Filene Center.

The main draw to Wolf Trap is the Filene Center, which comes alive in the summer months with a variety of concerts, shows and performances. This remarkable outdoor theater was constructed of wood from native tree species and truly looks at home in this pastoral setting. Wolf Trap attracts a wide range of performers. Aretha Franklin, Bill Cosby, Counting Crows, Broadway musicals and symphony orchestras all perform here on a regular basis.

The least expensive tickets at the Filene Center are, in my opinion, the most enjoyable – the lawn seats. Over the years, patrons have made lawn seating a tailgating event, bringing elaborate picnics to enjoy before the evening shows.

These are just a few of the many, family-friendly activities found in Washington. What are some of your favorites?