Marriott didn’t pay for this post, not really. I stayed with them while on a blog trip sponsored by the Jordan Tourism Board, so I guess indirectly they sort of did pay for this post. Unbeknownst to them, I’m alarmingly honest and have no concerns at highlighting everything properties do right and what they do wrong. In keeping with this spirit of honesty, here is my review of every Marriott in Jordan.

My first introduction to the hospitality industry in Jordan was at the Amman Jordan where I passed out following a long, thirteen hour flight from New York. The first thing I noticed was the attention to security, a recurrent theme throughout my trip and not at all unique to Jordan. Countries all over the world, including the tourist hot spot Thailand, have pretty tight security around Western hotels, precaution more than anything else.

I stay at Marriott properties fairly often, I like their consistency across their brands and have maintained status with them for years. I was pleased to see that because of that status I was given access to the Executive floor level with its free breakfast and endless quantities of Diet Coke and water. In other words, hotel guest heaven.

The hotel itself was grandly decorated, the room was modern and comfy and nothing bad happened to me during my stay. That’s pretty much all one needs from a hotel.

The Amman Marriott is in the western side of the city and while there weren’t tons of things to do next door, there were a wide variety of restaurants and shops within a ten minute walk.

Overall it’s a great hotel that checks all the boxes.

Ok, this is where I’m going to get a little snarky. There are a ridiculous number of hotels in Petra, I believe it’s more than 800 for what is essentially a city built entirely around the Petra tourism trade. People live there, but they all owe their livelihood to the masses who descend upon this Great Wonder every year.

Like any tourist town, Petra has hotels for every budget, from the backpacker to super luxury traveler. I was thrilled to learn that I’d be staying with Marriott, not just because it is on the higher end of the scale, but because I know and am comfortable with the brand.

The hotel itself isn’t that large but does have an interesting main atrium/courtyard set up. It’s an older hotel that’s been refurbished though, quickly apparent from the small and somewhat drab rooms.

The best thing about the hotel are the views. The Petra Marriott sits high on a hill with stunning, sweeping, breathtaking views of the Petra mountains and surrounding desert. Sitting on the patio at sunrise/sunset is a remarkable experience that is well capitalized upon.

I was booked into their dining room for dinner, which was incredibly depressing. I was surrounded by a large group of German tourists who could have been dining in Frankfurt given their lack of culinary imagination. Forget the hummus and knafeh, more steak and beer for them! It’s not as if they had that many choices though, the dinner buffet was underwhelming and looked as if it belonged in a nursing home.

I could forgive the drab rooms and depressing meals if only they had good customer service. Unfortunately, they did not. I first noticed how sketchy they were when they followed me wherever I went in the public areas. I guess the security guard was bored and having realized the Germans weren’t a threat, targeted me. I felt paranoid and as if I didn’t belong. Not a great feeling for a hotel to impart onto its guests. The worst though was at check out when the humorless, overly officious front desk clerk asked me if I had taken anything from the minibar. I never take anything from any minibar and quickly answered no. I guess that’s what he wanted to hear because a sly smile suddenly appeared on his face and he said, “Actually housekeeping says you took a juice.” I denied it, he insisted and what ensued was a bizarre debate on whether or not I had stolen a $2 juice. I was shocked and incredibly angry, happy he finally let it go but it was too late. I was upset and my impression of the hotel had forever and irrevocably changed.

That was just my experience though and I don’t want to turn this into a TripAdvisor complaint post. The truly great feature of the hotel are the views, which really are extraordinary. 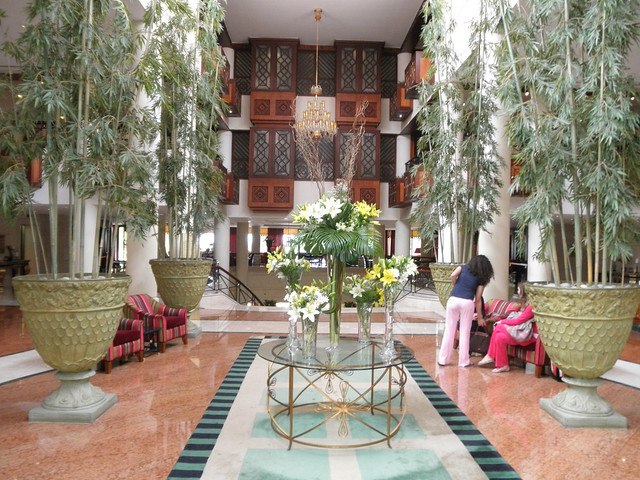 The last stop on my whirlwind tour of Jordan was at the Dead Sea, a quirk of nature that is a top tourist destination. The Marriott Resort is a five-star property, and it definitely lived up to every one of those stars.

I walked into the lobby and was immediately impressed. It was huge, lush and grandly decorated. When I checked in they apologized for the fact my room wasn’t ready and ‘made up for it’ by upgrading me to a beautiful suite. In every category where Petra stumbled, Jordan Valley excelled. The rooms, food, service and access to the Dead Sea were all five stars.

It was a resort though, so I did feel a bit trapped and at their mercy for meals and extras. As is usually the case when stuck at a resort, the fees were all fairly high and capricious. It’s a small complaint though for a resort that does almost everything right.

There you go, a review of every Marriott in Jordan, – all three of them. In thinking about this post it brought home the point that while brand loyalty can be important, location and attention to customer service are much more important when choosing a hotel.