We were on a Mediterranean cruise and at first we were disappointed that we didn’t have more time to spend in Athens. I’m an antiquities nut and the thought of rummaging about Athens – THE ATHENS – gave me goose bumps.

We knew the timing would be tight, so we prepared to leave the huge Celebrity Solstice cruise ship as soon as we were allowed. We flagged a cab and asked him to head for the Acropolis as fast as he could. 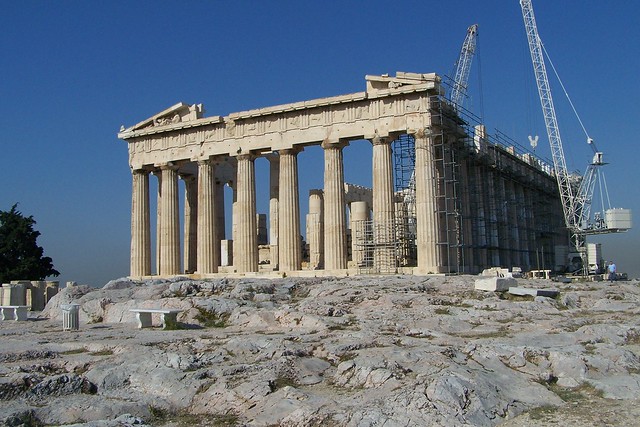 People sometimes use the names Acropolis and Parthenon interchangeably, which isn’t quite right. The Acropolis refers to the mount that rises above the great city of Athens on which the Parthenon is perched. The Parthenon is a gigantic temple that has been the center of Athenian life for millennia. Whatever you call it, this iconic monument was our first stop.

We arrived a few minutes before the site opened and I was pleased to see that the hoards of tourists had not yet finished their coffees in the cafes below. We weren’t alone, but I didn’t feel like I was in a Tokyo subway car either. We walked through various ruins, I have no idea what they were, intent on reaching our objective, the Parthenon. Finally, as we emerged from the last set of stairs there it was, the ancient temple in all of its glory. And a lot of scaffolding. And cranes. 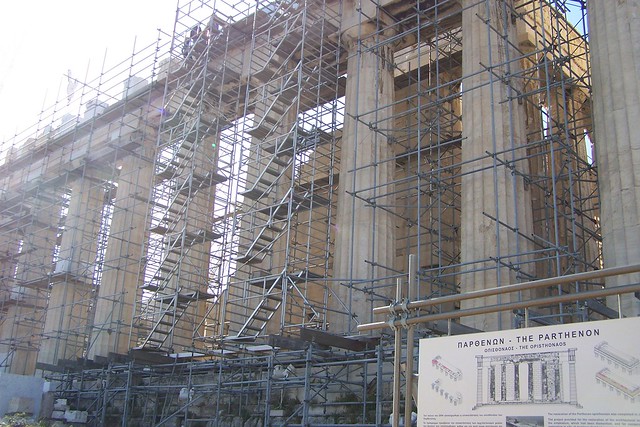 Even though it was early, it was hot and it felt like it was going to be another scorcher. We walked around the construction site that is the Parthenon, looking at it from various angles and taking the required photos. There were other buildings nearby, but there wasn’t anything describing what they were. I guess they really want people to rent their audio tours because there was nothing in fact to explain anything. We approached an observation point and saw the city of Athens spreading below us in all directions. Athens is in a bowl and the haze hung thick over the city. Except, it wasn’t haze it was smog, thick, disgusting smog. It was depressing actually. 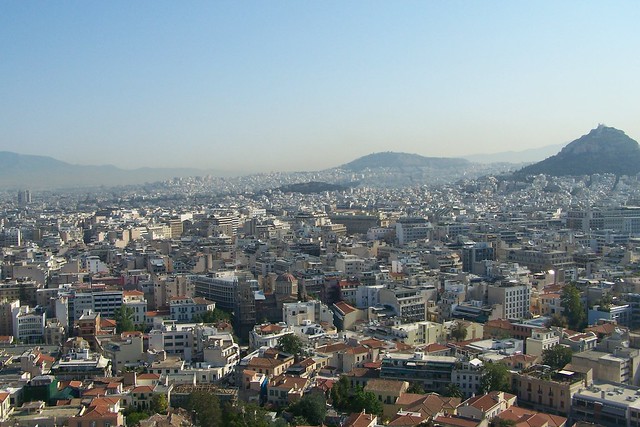 We walked back around the giant temple that was once the center of devotion to the goddess Athena, and descended to the nearby Forum. My only other experience with an ancient forum was in Rome, and I was let down when I saw the Athens version. There was nothing there, not really. Just a lot of poorly explained rubble. One of the most impressive buildings in the agora was, as it turns out, a reproduction. One monument I really did love was the Temple of Ares, at the extreme edge of the forum. It’s geometric perfection appealed to me at a base, almost instinctual level. 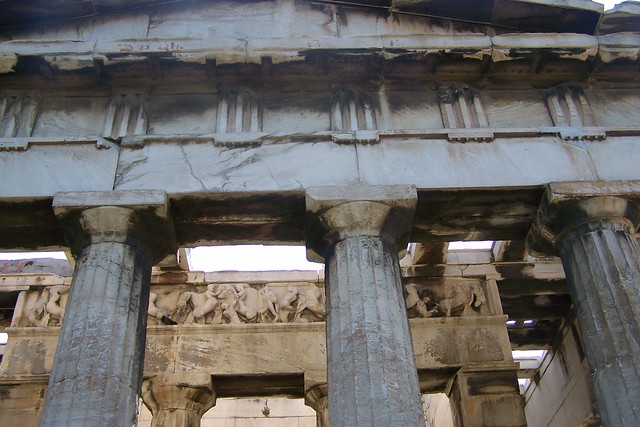 We stayed long enough to feel that we hadn’t wasted our money, and wandered into non-ancient Athens for a coffee and pastry.

I should probably mention that my partner is not as enamored by ancient things as I am. He has a pretty low tolerance for them actually and our travels through the Mediterranean was stretching his travel patience to the limit. I couldn’t visit Athens though without a stop at the National Archaeological Museum. 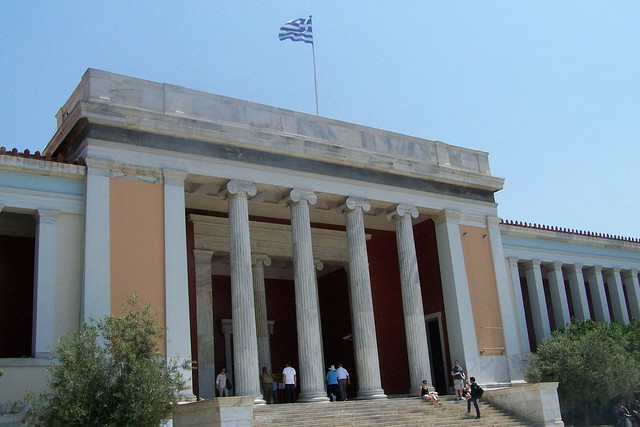 We navigated the creepy Greek metro system, managing to avoid pickpockets, and arrived at the museum in the early afternoon. It was very hot at this point and we were beat. We had done a lot of walking, and the pool back onboard the ship started to sound better and better.

I was nervous as we entered the stately building, glancing at Scott to see how he was managing. I knew his attention span wouldn’t last long and so I set out to see the highlights of the museum. It really is an impressive place and demonstrates the amazing and impressive history of Greece.

After an hour, Scott threw in the towel and I agreed. There’s only so much marble you can look at before losing all interest. We popped in to the gift shop to purchase a set of coasters in the design of the Phaistos Disc and left.

We finished our time in Athens walking around, trying to get a feel for the city. And to a large part we succeeded, we just really didn’t like that feel. As a city it doesn’t have the same intangible “something” that Rome or Paris has. It was dirty, crowded and at times dangerous. It’s not at all what I expected, what I hoped for.

I’m of course thankful for the opportunity to visit Athens and witness firsthand remnants of the amazing accomplishments of Greek society. But I felt guilty that I didn’t like the city. I felt as if I was supposed to like it, and because I didn’t I must have missed something or done something wrong.

But I didn’t. I wouldn’t change anything about the way we toured the city, the fact is that I just don’t like Athens and that’s ok. Travel is a huge commitment for most of us, both financially and in time. We want everything to be great and perfect, but that’s not possible. I don’t regret visiting Athens, it provided experiences I will always remember, I just don’t ever want to return. Not everything will be great when we travel, but it’s what we take away from those experiences that matters. Rather than learn anything about Athens, my takeaway from the city adventure was that even some of the most iconic, most visited places in the world can suck. It’s just a part of the travel experience.